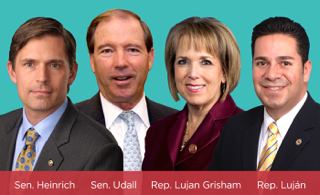 As the national economy shows signs of real improvement, New Mexico’s recovery has been challenging and slow. Working families want to know when we will see more jobs, higher salaries and access to quality education at every level. The state Legislature has an opportunity to put New Mexico in a position to provide that economic security and rebuild the middle class.

Unfortunately, the first bill to gain traction at the Roundhouse is a divisive plan backed by out-of-state political operatives designed to divide working families. The so-called Right-to-Work plan championed by special interests would do more harm than good. Consider these consequences:

The Legislature’s Jobs Council has produced bipartisan ideas to create jobs and help rebuild New Mexico’s economy. Democrats and Republicans got together with business and labor leaders, local and state officials and economic developers who endorsed these ideas.

So it is disheartening to see the new House Republican leadership using its newfound power to focus on legislation that would hurt working families. And it’s disappointing to see voices of opposition silenced during committee debate on this issue.

We have opposed anti-worker policies like these at the federal level because unions have long provided benefits for all workers, regardless of membership, by fighting for benefits many now take for granted such as overtime, workplace safety and paid leave.

Legitimate studies are proving that anti-worker laws would weaken New Mexico’s already struggling middle class. Employees with unions at their backs are able to help raise the bar on pay and benefits for all workers in every industry. Anti-worker laws diminish that power. That’s why working families in New Mexico have stood strong against such policies every time outsider special interest groups have tried to force them on us.

The fact of the matter is that people are already free to join a union or not — that’s the law.

When corporate-backed special interest groups tell people to drop their union memberships, working people suffer the consequences. Non-union workers lose the guarantee that they will be heard when it comes to working conditions, benefits and wages. Working men and women in New Mexico know that real employee freedom means having a voice in the workplace.

The New Mexico Legislature has a history of standing up for working families. We urge state lawmakers to focus on growing our economy, creating well-paying 21st century jobs, investing in our schools and strengthening our middle class. There’s so much good that can be done for our state, let’s focus the effort where it will really count by putting New Mexico’s working families first.