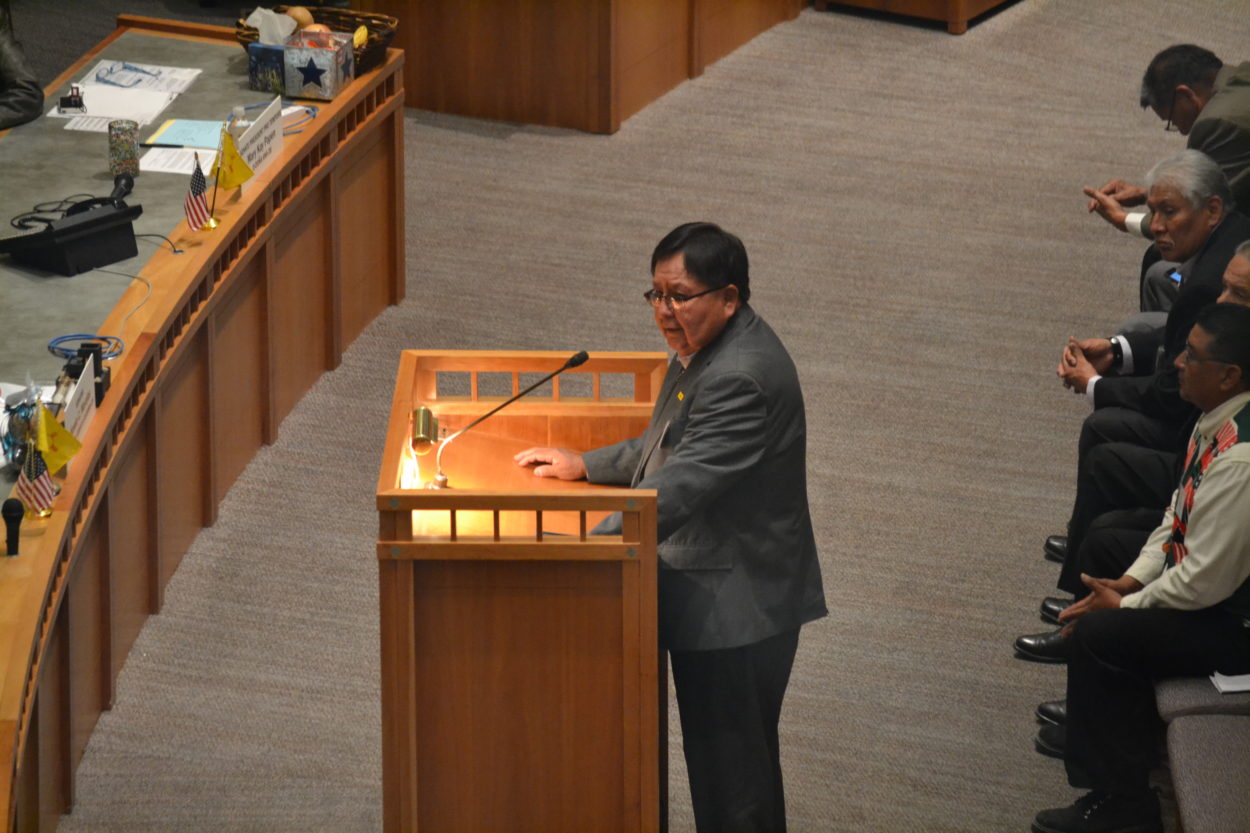 Representatives and tribal leaders from around New Mexico addressed lawmakers on the Senate floor on Wednesday.

Tribal members addressed their concerns about a working relationship with the state including ways to increase revenue.

The groups were invited by the Senate in an effort to fix what Democrats said was a slight by Governor Susana Martinez last week. Senate Majority Floor Leader Michael Sanchez, D-Belen, called a committee of the whole Senate and invited members of the House to attend.

Sanchez told New Mexico Political Report that he asked the groups to come back after it was apparent that they were not happy.

Referring to tribal officials not being able to speak last week, Sanchez said, “I could see the disappointment in their faces.”

A week earlier, tribal members were invited to the capitol for American Indian Day, a biennial tradition in the Legislature. Democrats said the governor and House Republicans failed to give ample attention to tribal groups.

Sanchez said he sent out an invitation in the form of a memo to all members of the House. Most House Democrats left a floor session to listen to the speakers. According to Sanchez, three Republican members came to the Senate chambers but only one of them, Rep. Sharon Clahchischilliage, R-Kirtland, stayed until the end.

Many of the leaders spoke about improving economic standards by tribes working with the state government. For many of the leaders, the working relationship they talked about came in the form of gaming compacts.

Fort Sill Apache Chairman Jeff Haozous spoke about his group’s history of being moved from their homeland in southern New Mexico to Oklahoma. He told the committee that many people have accused the Fort Sill Apache group of only wanting more money. Haozous admitted that the group could use more money, but ultimately dismissed the claim.

“My mission is to restore our people to our rightful home and rightful place in the world,” Haozous said. “It’s the right thing for our people.”

Navajo Nation President Ben Shelly also spoke about gaming compacts. He told lawmakers that he is confident that his and other groups currently negotiating with the Martinez administration will come to an agreement this session. He added that gaming compacts are important to tribes like his who cannot create sufficient revenue without the help of casino gaming. He urged lawmaker to support the compact when it comes to the floor.

“We all need revenue, we all need jobs,” Shelly told legislators.

Not all of the urging from leaders was related to gaming. Some leaders spoke about the importance of better infrastructure and other means of shared revenue.

Jicarilla Apache President Ty Vicente proposed shared revenue from oil and gas. He suggested that the taxes the state collect from oil and gas producers be shared with his tribe. He added that tourists are always welcome to come visit the Jicarilla land. He urged tourists to not “look at pictures of the Jicarilla people,” but instead to visit in person.

“Have your eyes take that picture,” Vicente said. “Come visit the aliens.” His statement was most likely in reference to a long running conspiracy theory regarding a hidden military base in Dulce, NM, a small town on Jicarilla land.

Sanchez said he invited the tribal members back because, “Government to government conversations have to go on and we in the legislature need to listen to those tribal officials.”

A spokesman for Martinez told the Santa Fe New Mexican last week that complaints by Democrats were overblown.

“The Governor was simply citing various examples of where she and Native American legislators — of BOTH political parties — have worked together on critical issues for the benefit of our kids and families,” Michael Lonergan said in a statement to the New Mexican.