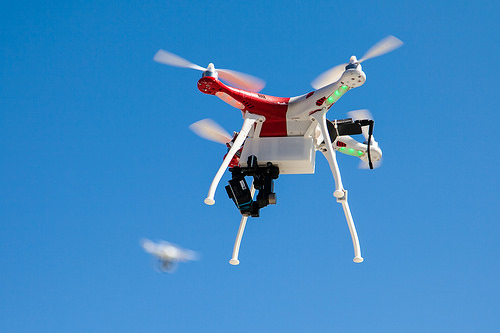 The bill, SB 303, passed the Senate Public Affairs Committee on an 6-2 vote, though committee members warned it had some problems that may trouble the Judiciary Committee.

The bill’s sponsor, Sen. Jerry Ortiz y Pino, D-Albuquerque, said it was help give some privacy to New Mexico residents. The legislation is cosponsored by Rep. Paul Pacheco, R-Albuquerque, a former police officer.

“It’s not just theoretical, this is happening already,” Ortiz y Pino told the committee. He and his expert witness noted that many other states are considering legislation to police the use of drones.

According to the National Conference on State Legislatures, which tracks state legislatures and legislative efforts in the states, 35 states considered legislation related to drones.

Law enforcement is included in the law, although law enforcement could use drones without a warrant when a life is in imminent danger and the use of the drone would help save a life.

“I question our ability to regulate federal and tribal law enforcement agencies,” Candelaria said. “I’m not entirely sure the state of New Mexico has the authority to legislatively restrict the conduct, the law enforcement conduct of federal officers, let alone tribal officers.”

Another senator who had questions about the law enforcement sections was Craig Brandt, R-Rio Rancho. Brandt said in the future he thought police would use drones instead of helicopter to track suspects and that this law could make that illegal.

“I think that we would tie the hands of law enforcement to protect citizens,” Brandt said.

Ortiz y Pino said police could still look into people’s backyards and onto their property with a warrant.

“If they’re on a fishing expedition, just routinely flying around the neighborhood trying to find criminal activity, they can’t do that,” he said.

Sen. Ron Griggs, R-Alamogordo, was one of the two to vote against passage. He said that he would have supported a memorial to look into how to proceed on the issue.

“I’m aware of the bill’s shortcomings, but I certainly understand its importance,” O’Neill said. He did commend Ortiz y Pino’s work on the bill which is language often used to mean that legislator won’t be supporting the bill.

Candelaria was also concerned if this would impact Google Maps. He mentioned that Google purchased a solar-powered drone manufacturer in Moriarty, New Mexico. These are being tested to provide Wi-Fi in remote areas, not provide images for Google Maps.

“Drone technology isn’t something we should be inherently scared of” Candelaria said. He warned that the legislature should avoid passing an “overly broad law” before such a new technology is fully understood.