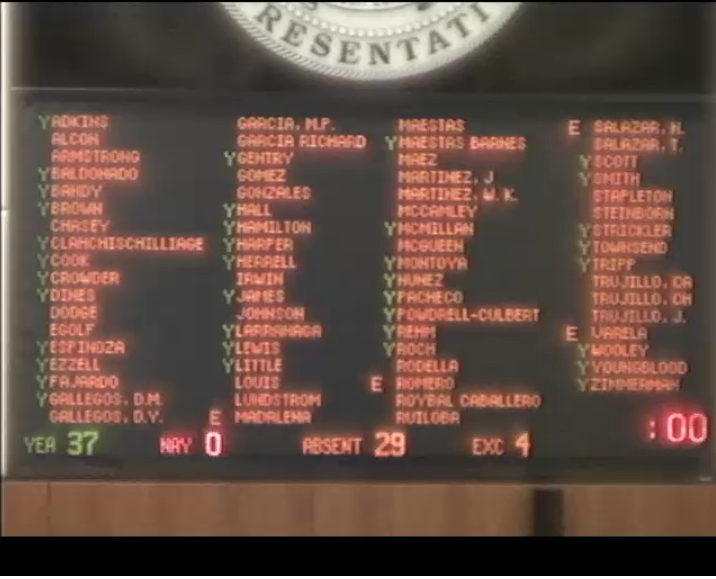 The final vote on HB 76 in the House after all Democrats boycotted the vote.

A debate on the House floor ended with the entire Democratic caucus walking out in protest on Tuesday night.

After more than three hours of debate, mostly by Democrats, an amendment was introduced by a Republican. Following the introduction of the amendment, House Majority Leader Nate Gentry, R-Albuquerque, moved to close debate.

Debate can be stopped by a majority vote after three hours on a bill according to House rules.

Democrats said they were not given the proper amount of time to debate the new amendment and wanted an additional three hours on each proposed change to the bill. Republicans said they were following regular procedures and that the amendment was distributed to all members with ample time to review it.

Democrats did not agree and left the floor, leaving only Republicans to vote on the final legislation. The legislation passed unanimously, 37-0.

Minority Leader Brian Egolf told New Mexico Political Report afterwards the decision to leave the floor was because the Democrats have been shorted this session.

Majority Leader Nate Gentry, R-Albuquerque, said the debate process is the same as it has been for the past two years when Rep. Ken Martinez, D-Grants, was Speaker of the House.

“We’re applying it like [Martinez] did it,” Gentry said, referring to not adding time to debate the amendment.

The debate surrounded HB 76, a bill sponsored by Rep. Dennis Roch, R-Logan, and its ties to teacher evaluations and student assessments.

Democratic members took issue with the bill’s wording related to teacher performance, something that the bill uses to determine who can bypass typical advancement procedures. For more than three hours, Roch answered questions and contended that his only intention was to give some teachers an opportunity to advance without further schooling.

The bill had been rolled over from the previous night when Rep. Stephanie Maez, D-Albuquerque, added an amendment that would increase all teachers’ salaries, a move some Republicans said was intended to force them to vote against teacher salary increases. When Tuesday’s debate began, Roch announced that he viewed it as a friendly amendment, meaning he was open to the possibility of it being added if the House voted to approve it.

After more than three hours of debate, Majority Whip Alonzo Baldonado, R-Los Lunas, made a motion to add an amendment that would essentially remove the teacher salary provision added by Maez, leaving only pay raises for teachers who rate highly in teacher evaluations.

Democrats appealed to the acting Speaker of the House—at the time Rep. Jason Harper, R-Rio Rancho—to allow time for more debate. They argued that a new time limit of three hours should start when changes were made to the bill.

Egolf told the remaining body that he was disappointed in how things played out, then he too left the chambers. When it came time to vote on the amendment, Rep. Bill McCamley was the only Democrat on the floor.

The amendment passed with a vote of 36-1, with McCamley as the only dissenting vote. The next vote, on the final bill, resulted in a 37 to 0 vote as McCamley had already left.

As for being fair, Egolf said following the floor session he understands that Gentry felt wronged in previous years, but that he should not take it out on the Democratic caucus.

Still, Gentry contended that the Republicans have gone out of their way to work with the Democrats.

“We’ve made every accommodation to be fair and follow the rules,” Gentry said. “This is the second time they’ve walked away.”

Gentry was referring to another instance when, he said, Democrats left a committee meeting in protest.

The bill now goes to the Senate.