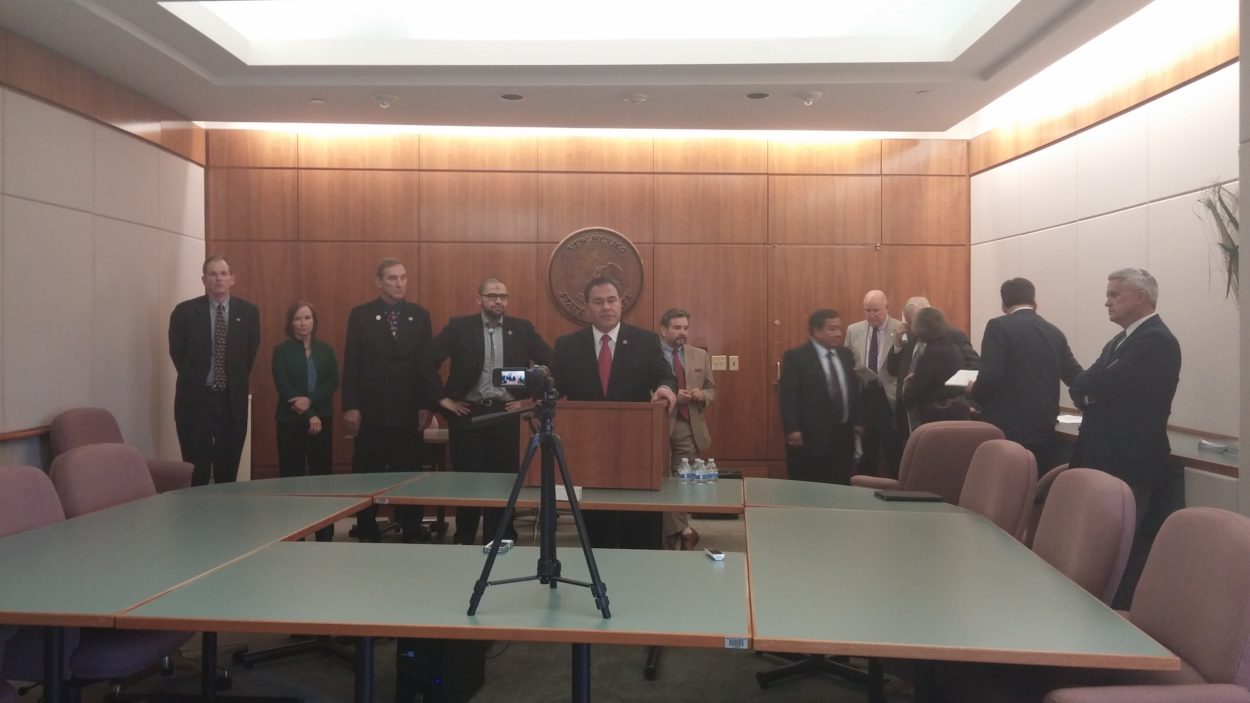 From the answers of two conservative members of the Senate, it looks like Democrats expect right-to-work legislation to be tabled in the committee process and never make the floor.

Both Senate President Pro Tem Mary Kay Papen, D-Las Cruces, and Sen. John Arthur Smith, D-Deming, are conservative Democrats. Each said they respect the committee process when asked if they believed the bill would pass the Senate.

“I will not vote to blast any bill, mine included,” Papen said when asked if she would vote to blast the bill if it remains stuck in the committee process.

Blasting a bill refers to a majority of the floor voting to remove a bill from a committee.

Smith also said bills must go through the entire committee process to get his support. Smith has been criticized in the past for legislation not passing through the Senate Finance Committee, which he chairs.

Smith also backed an increase of the gas tax to pay for roads, which he said will create jobs. He said the alternative being proposed is to borrow money.

He admitted that Gov. Susana Martinez’s campaign pledge of not raising any taxes was “a huge obstacle.”

“They are great soundbites but they don’t lend themselves to good financing,” Smith said.

“We both want to build roads,” Smith said of himself Martinez administration, “where our disagreement is right now is I want to pay for it and she wants to borrow and spend on it.”

Right-to-work has largely been off the radar in the New Mexico until Republicans took control of the House of Representatives following November’s elections.

Senate Majority Leader Michael Sanchez, D-Belen, said that right-to-work was just a slogan and that “slogans are cheap.”

“It’s a cheap political trick to try to divide this state and the people in this great state,” Sanchez said.

Sen. Joseph Cervantes, D-Las Cruces, said he is a business owner and has had experience negotiating on both employer and employee sides of collective bargaining. He opposes the right-to-work legislation.

Cervantes also said that right-to-work has never been an issue that employers have brought to him.

“None of them have ever raised right-to-work with me as an issue,” he said. He said that employers instead have told him that they need infrastructure including roads and job training programs.

Senate Democrats discussed the capital outlay budget, job training funding and other jobs initiatives as job creators. They said their legislation would create 73,000 jobs, 18,000 of which would be in construction. Those construction jobs, according to numbers provided by the Senate Democratic office, would come from the gas tax increase.

Sen. Carlos Cisneros, D-Questa, said that the capital outlay bill is important for creating jobs and for building infrastructure.

“It will be predicated on bricks and mortar, the types of jobs that actually put people to work, provides as salary and gives us facilities across the state,” Cisneros said of the annual legislation to fund projects.

Democrats said they have introduced 58 pieces of legislation related to creating jobs and economic growth.

Blasting legislation had been frequently used in the past in both the House and Senate. However, such a procedural move has been nonexistent in the Senate in recent years.

House Republicans used the process a number of times to pass driver’s license legislation that was stuck in House committees when they were in the minority. Earlier this year, the House majority voted to remove a third grade retention bill from a committee.