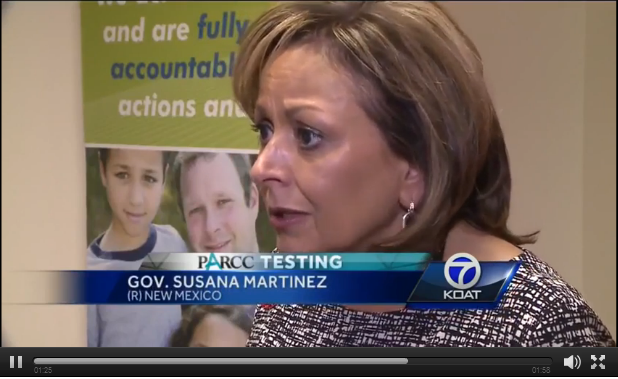 Screenshot of Susana Martinez in a KOAT story on PARCC testing.

Susana Martinez said that she knows students have the rights to protest, but it is time for students to get back in the class room and take the PARCC tests.

Screenshot of Susana Martinez in a KOAT story on PARCC testing.

Martinez made those statements speaking about the Partnership for Assessment of Readiness for College and Careers, or PARCC, test in an interview with KOAT-TV that aired Wednesday night. KOAT does not include embeddable videos of stories.

“They have a right to protest, I’m not saying they don’t,” Martinez said. “But when it’s time to be in class, that’s where they belong: in class.”

New Mexico Political Report spoke to two Senators about the walkouts in protest of PARCC testing.

Sen. William Sharer, R-Farmington, said, “I don’t think these students have a clue what they’re walking out on.”

“Of course we’re raising the standards,” Martinez said. “We don’t want to be 48th or 49th in the nation, of course we want it to be something. But it’s testing what you’ve been taught.”

Earlier this week, Skandera and interim Albuquerque Public Schools superintendent Brad Winter said that the PARCC tests went well through the first day of testing with no glitches.

“We’ve got a few things to work out overnight, but overall it was a great day,” Skandera told KOAT.

Students around the state protested the controversial new exams.

Martinez said that she has looked at the course. Martinez and Public Education Secretary Hanna Skandera were challenged by Senate leadership to take the test.

The governor and Skandera declined, calling it a political stunt.

New Mexico is one of 12 states, and the District of Columbia, which use the PARCC standards and exam.