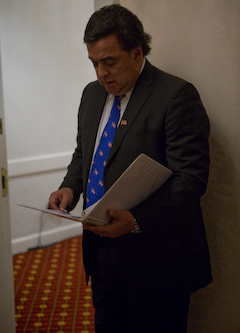 Former New Mexico governor Bill Richardson donated his professional and political papers to the Dolph Briscoe Center for American History, which is at the University of Texas at Austin.

Richardson served as governor of New Mexico for two terms, before which he served as a United States ambassador to the United Nations, Secretary of the Department of Energy and a congressman from northern New Mexico for nearly 15 years.

The documents will include negotiation transcripts, photographs and audio and video recordings from his time in public service as well as campaign documents related to his 2008 presidential run.

According to a release by the university, Richardson made the announcement on Monday.

“The center has visionary leadership and an ambitious reach in its acquisitions, with ever-growing collections of national significance,” Richardson said. “I’m honored that my papers will reside in the same repository as those of such historically notable figures as Sam Houston, Walter Cronkite, James Farmer and Henry B. González.”

Don Carleton, the executive director of the Dolph Briscoe Center for American History, welcomed Richardson’s donation of his papers to the center.

“The Richardson papers cover the career of this internationally known, groundbreaking public servant,” Carleton said. “I am also pleased that Gov. Richardson has expressed his strong interest in a continuing relationship with the center and the university community. I look forward to benefitting from his advice and support.”

According to the the release, the papers will be available to researchers once they are cataloged.

Richardson served as governor of New Mexico from 2003 to 2011. Previous to that, Richardson served as the Secretary of Energy from 1998 to 2001 and the U.S. Ambassador to the United Nations from 1997 to 1998. Both were under then-President Bill Clinton.

He frequently shows up in discussions of international relations, especially in those discussing North Korea or Cuba.