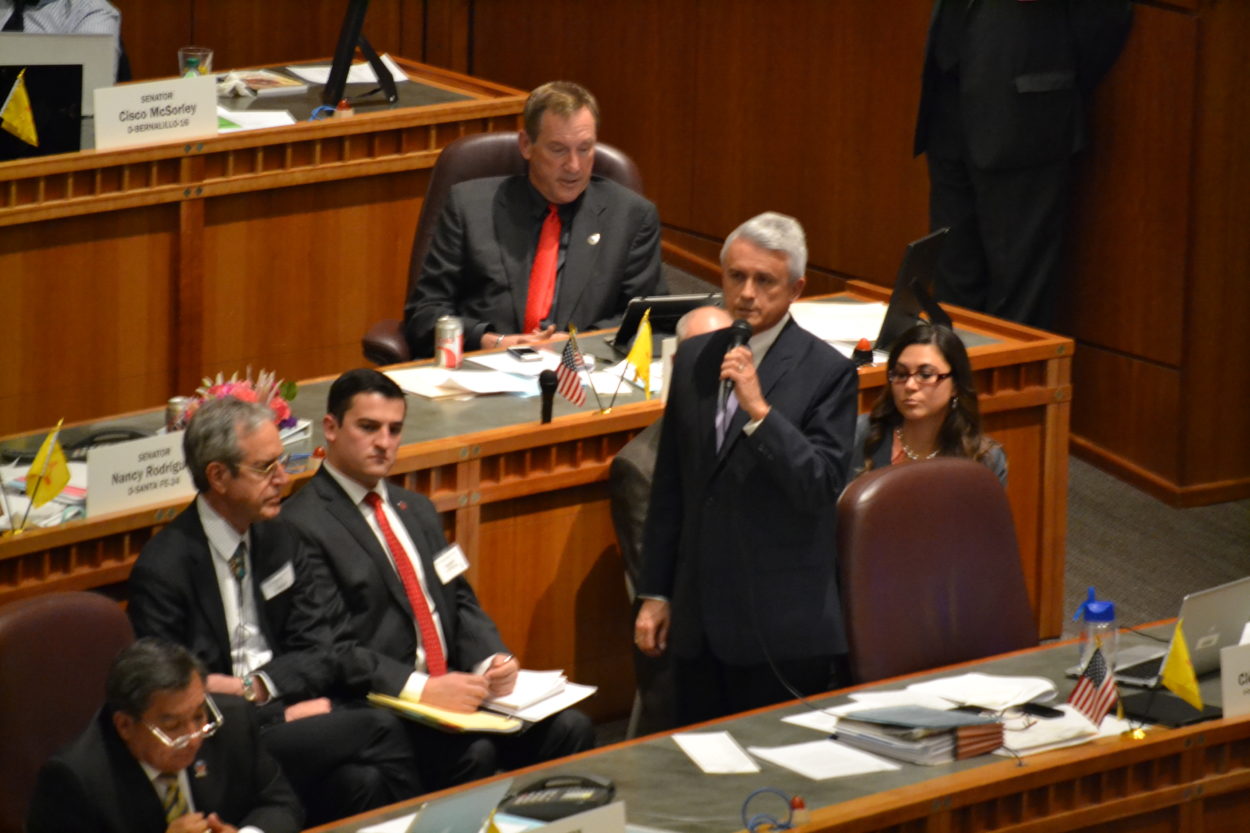 The Senate approved a tribal gaming compact by vote of 35 to 7 on Wednesday evening.

After an hour-long debate, Senators voted to send the proposed gaming compact to the House floor. The compact, which was negotiated between representatives of Gov. Susana Martinez’s office and five New Mexico tribes, would expire in 2037.

See our primer on gaming compacts written before the session.

Sen. Clemente Sanchez, D-Grants, who is chairman of the Committee on Compacts, presented the compact in the form of a Joint Resolution.

Some members spoke out against the proposal on the basis that the compact is not as inclusive as they said it should be.

Sen. William Soules, D-Las Cruces told his colleagues that he was concerned that the Fort Sill Apache tribe was being excluded based on language in the compact. He said the tribe that has land in southern New Mexico could not operate a gaming facility because they obtained their land after 1988.

Language in the Indian Gaming Regulatory Act (IGRA) states that tribes cannot operate gaming facilities in land that was obtained in trust after 1988, when IGRA was adopted.

Sen. Cisco McSorley, D-Albuquerque, also stood in opposition of the compact because of the Fort Sill exclusion. He also said he has always voted against gambling out of principle, but that he especially disagreed with this compact and that the Fort Sill Apache people have been mistreated for too long.

“We lied to these Native Americans,” McSorley said. “We took away the very reservation we promised them.”

McSorley was referencing government removal of the Chiricahua Apache tribe from New Mexico. The group was forced out of the state in the 19th century and moved to various states until they settled in Fort Sill, OK. In 2011, the federal government officially recognized the tribes land in New Mexico.

Sen. John Arthur Smith, D-Deming, whose district encompasses Fort Sill land, said he opposed the compact on economic grounds. As he said in the Committee on Compacts meeting, he was concerned with the state having too many electronic gambling machines. He said the state would reach its saturation point at about 12,000 machines and this proposal would allow up to 20,000 machines.

Smith was the only legislator to vote against the compact in the committee on compacts.

Other concerns from Senators centered on liability for intoxicated individuals that leave tribal facilities and get behind the wheel.

Sen. Peter Wirth, D-Santa Fe, said he did not like that gaming facilities could not be held responsible for injuries related to a DWI accident.

“I am concern as to why this issue wasn’t discussed during the negotiations,” Wirth said.

The Committee on Compacts did address DWI liability, but ultimately voted against a recommendation to change related wording.

Majority Floor Leader Michael Sanchez, D-Belen, also said he was concerned about gaming facilities being held responsible for over serving alcohol. He referenced laws in non-tribal jurisdictions that give injured people the ability to sue an establishment for over serving alcohol, often referred to as the dram shop law. Floor Leader Sanchez said he was concerned about an individual’s inability to hold tribes accountable in court, but ultimately voted in favor of the proposal.

Other Senators said they supported the compact because it allows continued revenue sharing between the state and tribes and that the money tribes keep go to good causes.

The compact will now go to the House floor for a vote. House members cannot make any amendments and can only vote to approve it or not. Even if the House approves the compact, it would need the governor’s signature and federal approval before June of this year.

The tribes that have signed on to the compact are The Navajo Nation, Acoma Pueblo, Jicarilla Apache Nation and the Mescalero Apache. Jemez Pueblo, who also signed on,  does not have any gaming facilities, but have said they would like to look into the possibility.

If the compact is not approved by June, tribal gaming facilities risk closing down until they get approval.