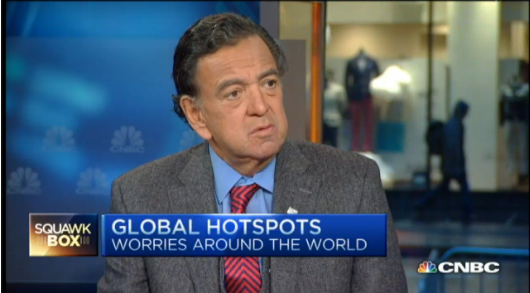 “I’ve been a backer of the administration…” Richardson said, “but on this one, I don’t know where I’m going to end up. Nuclear capacity, let it end or diminish.”

In addition to being a former governor and member of Congress from New Mexico, Richardson was also the U.S. ambassador to the United Nations and the Energy Secretary under former President Bill Clinton.

“Our beachfront is Israel. They’re our strongest ally. This relationship needs to be repaired.”

Richardson said he was concerned about more than just the nuclear capacity, but the recent actions in the Middle East by Iran in addition to the advance against ISIS.

“My worry is these other regional efforts,” he said. “Iran’s behavior, the support for Hamas, Hezbollah, the efforts in Yemen.”

Richardson also said it was interesting that Saudi Arabia is becoming a regional military power, as shown by the advance in Yemen.

Richardson also recently spoke about North Korea in Foreign Policy with Suki Kim. Kim is a Korean-American journalist who taught at an all-male science and technology school in North Korea and wrote a book about her experience.

Richardson from that conversation:

BR: They always were sending the following messages: One, they’re a very proud, strong country. Nobody controls them — not China, South Korea, or the United States. They want to be considered on par as a major power with the United States. Number two: It was very clear that they had a total devotion to their leaders, the structure of the party, the military — they were paramount in any of their discussions. They never made a decision on the spot. In negotiating with them, their idea of a concession was not a quid pro quo, like in Western countries. Their idea of a concession was they’re not going to budge, but what they will budge on is they will give you enough time to come to their conclusion, eventually. Time for them is not of the essence.

Here is the video from CNBC: