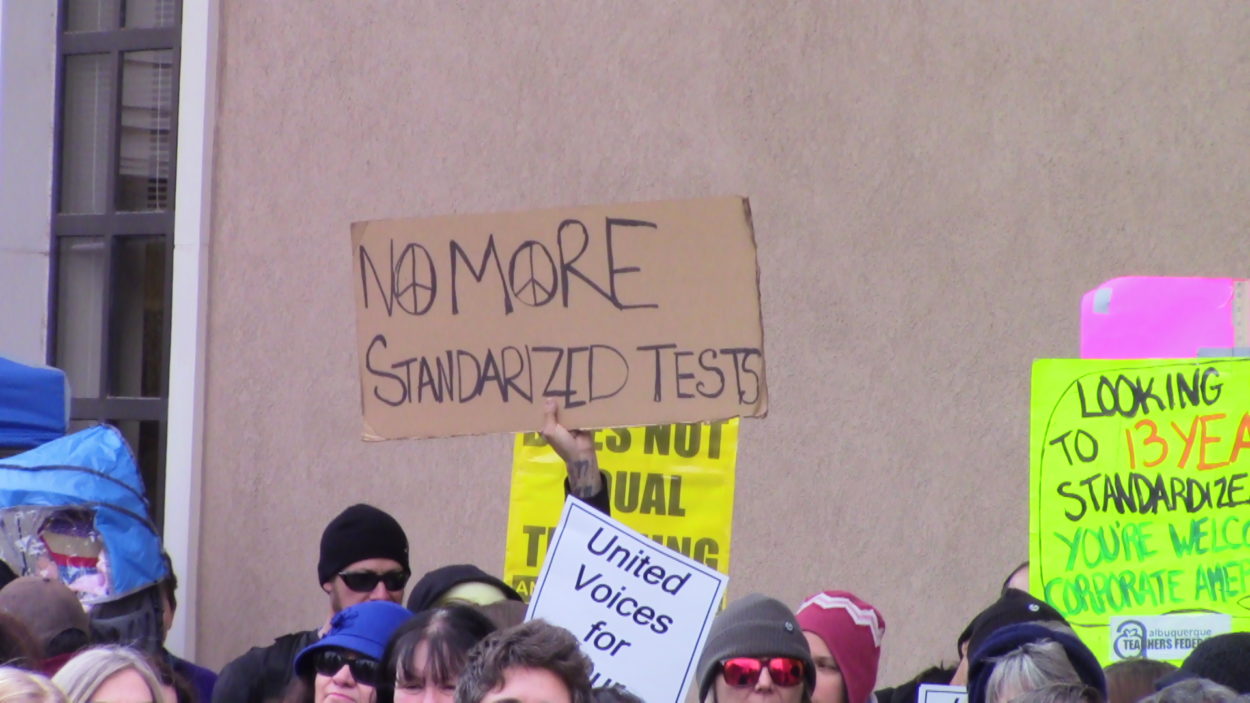 Promoters of the wrongly-labeled “right to work” bills distracted legislators from the important work at hand to improve our schools.  If passed, it would have increased the impact of poverty on the readiness of many students to learn, and it would have lessened the impact of teachers and other educators when raising our collective voice on education issues.   Teachers and other education professionals should be heard.

We applaud legislative champions who defeated the  “Right to Work” bill, and laud those who made strengthening public schools their top priority in the  first session of the 52nd New Mexico State Legislature.  If next year’s session is also distracted by such unneeded and harmful legislation, we will rise again.

Elections have serious consequences; the loss of a pro-public education majority in the House meant a great deal of effort defeating other very bad ideas  such as vouchers and a budget that falls short.

The budget has no salary increase for school employees other than new teachers and merit pay for teachers tied to the highly-flawed PED evaluation system.   When teachers compete with each other for higher test-score results this hurts students in many ways.  These negative impacts are compounded when schools are also “graded” based on standardized tests.  Unfortunately, the Merit Pay plan remains in the budget.

Custodians, nurses, bus drivers, secretaries,teachers, educational assistants,  food service workers, and other New Mexicans work hard everyday to create positive learning conditions, yet the budget gives them zero financial recognition.  No raises for most teachers and other school employees means no increase in spending at community stores.   It also makes it harder to staff schools.

While promoting programs to help students read, we opposed mandatory third grade retention.  It does not improve student achievement, does not yield long-term academic benefits, and has been shown to cause harmful effects including increased drop-out rates.  HB 41 (R-Youngboold) and SB 66 (R-Kernan) were both defeated in the Senate.

The flawed teacher evaluation and licensure determinations linked to testing remain in rule.   Several attempts to put this into law, including HB 144 (R- Smith) were also defeated,  but so too were efforts to limit testing.

On the good news side, there is more funding for the “K-3 plus” program of summer schools which does more to help students read at grade level than would flunking those who don’t.  Creating a state board and fund named after Carlos Vigil to help eradicate bullying is important.   Giving school districts more autonomy over textbooks, educational materials is wise.   There is a very small increase overall for schools.

Not being hit with direct cuts was a victory for education that falls short of what’s needed to move education forward in New Mexico.  When the legislature and the Governor finally fulfill their constitutional obligation to “sufficiently fund” the public schools, then education in our state will truly show the results we need.