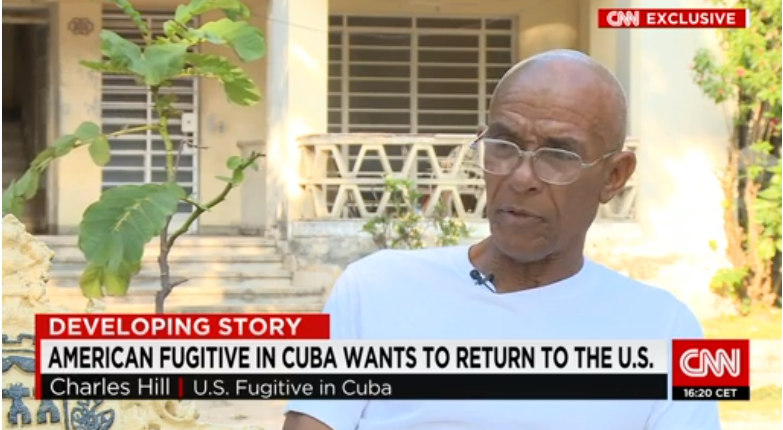 With a thawing of U.S.-Cuba relations, more attention is being paid to a man who hasn’t lived in the United States for more than four decades.

That is Charlie Hill, a man who is wanted for the killing of a state police officer and the hijacking of a plane that was flown to Cuba. Hill and two others were granted asylum by the Cuban government. Of the three, Hill is the only remaining survivor.

Hill and two others were part of a black separatist group called the Republic of New Afrika that sought to break off a portion of the United States as its own country. When pulled over by State Police Officer Robert Rosenbloom, one of the three shot and killed the officer.

In an interview with CNN, Hill hinted that he may be open to ending his time in Cuba and returning to the United States.

Hill, now 65, may extradite himself first, saying the warming of relations between the United States and Cuba could mean an end to what he calls his “exile” on the communist-run, Caribbean island, even if his return brings jail time.

She wasn’t the first. From KRQE:

Governor Martinez has now drafted a letter to the U.S. Secretary of State John Kerry and U.S. Attorney General Eric Holder that specifically asks for the Obama Administration’s help in pressing for Hill’s return. In the past, several other requests from New Mexico’s lawmakers including former U.S. Senator Pete Domenici, former Governor Gary Johnson and former Governor Bill Richardson have all failed to produce results.

“He admitted killing Robert Rosenbloom,” Barker said in the KRQE piece. “I asked him, ‘do you feel remorseful about it?’ He said, ‘no, he got what he deserved.’ Chilling.”

Hill told CNN that he did not pull the trigger but that he was in the car.

In 1996, then-congressman Richardson flew to Cuba and urged Fidel Castro to release Hill.

“I talked to Fidel and he said, ‘No way, under no circumstances would he turn them over, that they were legitimate fugitives,” Richardson told CNN. “I got a very strong signal not only would I not be allowed to bring back Charlie Hill but I wouldn’t even be allowed to talk to him.”

An attorney for Hill wants the case moved from New Mexico if Hill does return to face trial, saying the case has been politicized.