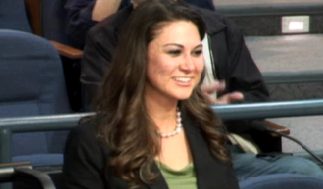 A former general counsel and deputy chief of staff to Gov. Susana Martinez will be Albuquerque’s new city attorney.

Jessica Hernandez, a 34-year-old attorney who’s been practicing law since 2002, comes to the city after just over four years at the governor’s office. Prior to then, she practiced law at Rodey Law in Albuquerque and clerked for US District Judge James O. Browning.

Before unanimously confirming her for the position, Albuquerque city councilors questioned Hernandez about the independence of the city attorney from both the mayor and the city council.

“As the governor’s attorney you obviously were advocating for the governor’s position in all matters,” City Councilor Isaac Benton said. “So this is quite different.”

Councilor Rey Garduño stressed this point, mentioning that previous city attorneys tended to side with either the mayor or the council.

“In the past we had discussions and some concerns that there was some level of the city attorney thinking that he or she worked for one or the other or both in some capacity,” he said. “They are independent. They work only for the city.”

Hernandez responded that the position “needs to be independent” in order for the attorney to give “frank, clear, honest” legal advice.

Hernandez comes with an impressive résumé, graduating college from the University of New Mexico in one year and law school by the age of 21.

Two of her former colleagues at Rodey spoke in support of her nomination to the position by Mayor Richard Berry and gave glowing recommendations. They mentioned that at the governor’s office she would speak to the state Supreme Court “on short notice” and was able to negotiate complex compacts with sovereign nations.

At one point during the city council meeting, Councilor Ken Sanchez asked Chief Administrative Officer Rob Perry how many people applied for the city attorney opening.

Sanchez noted that one of the candidates, Roberto Ortega, works at the United States Attorney’s Office, brings 25 years of experience and still didn’t get an interview.

“Ortega is an excellent lawyer,” Perry responded. “Some of the issues were managerial experience.”