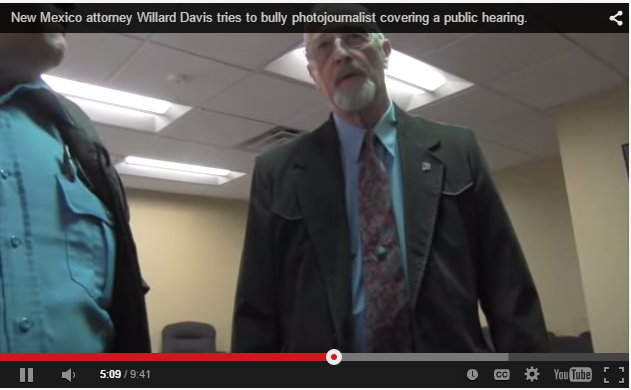 The city said so last week in a formal response to a complaint filed with the New Mexico Attorney General’s Office.

Charles Arasim filed the complaint with the office on March 9, alleging the city violated the Open Meetings Act after being blocked from videotaping multiple city personnel hearings.

In the response, interim Albuquerque City Attorney Jenica Jacobi and assistant attorney Nicholas Bullock wrote last week that the city’s personnel hearing officers do not have to make accommodations for members of the public who want to record the hearings.

But before the Personnel Board makes a decision on whether a city employee has been wrongfully treated, the complaint must first go through a separate hearing process. There, a hearing officer listens to arguments from both sides and gives a recommendation to the board.

It’s to these personnel hearings that Arasim, an Albuquerque activist, has been bringing his video camera and attempting to record.

Things got heated on March 18 when Arasim brought his video camera to the personnel hearing of former Albuquerque Police Officer Gil Vigil, who was fired in 2014 for not properly intervening in the Omaree Varela case. This received a large amount of attention when the 9-year-old boy died after being kicked down the stairs by his mother.

At the March 18 hearing, hearing officer Willard Davis called security to have Arasim removed from the meeting for recording.

“Recording is up to me,” Davis told Arasim.

“No, sir, it’s not,” Arasim replied. “It’s up to the Open public Meetings Act, which is state law.”

“This is not an open meeting,” Davis responded.

“This is a public hearing,” Davis said. “There’s a difference.”

“No, sir, there’s not,” Arasim responded.

The city attorneys define the perceived difference Davis referred to in their response to the complaint filed to the Attorney General. Because the hearing officers are contracted by the city and only make recommendations, the city argument goes, the personnel hearings aren’t subject to OMA, which requires that members of the public who want to record meetings be properly accommodated.

“The Hearing Officers are not members of the [Personnel] Board,” their letter states. “They are separate and lack any power to make decisions on behalf of the Personnel Board and are therefore not subject to the OMA.”

Both city attorneys affirm that the hearing officers denied allowing video cameras at personnel hearings at least three times between February and March. All three meetings involved Arasim, and he recorded the entirety of one of them. The two other hearings were vacated.

Their letter also cites personnel hearings’ “rules of procedure,” which state that “the Hearing Officer is responsible for the control and decorum of the hearing room” and therefore “may take any action he deems necessary to effectuate a full, fair, impartial and expeditious hearing.”

Arasim doesn’t buy the city’s argument. He said the city is “playing with semantics.”

“The [city] employees are under the impression that these hearings do influence the Personnel Board,” Arasim told New Mexico Political Report.

Arasim isn’t the only one who’s had trouble videotaping these meetings.

Read the city’s official response to the OMA complaint below: