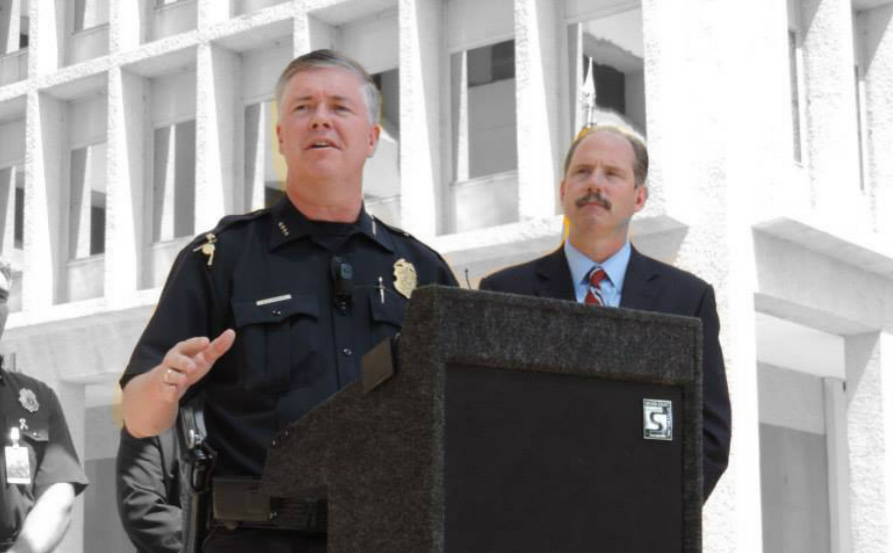 Update: Keller spoke to the press and New Mexico Political Report spoke to the city of Albuquerque. See that piece here. Post continues as written below.

Schultz officially retired from APD in January 2014, but his communications with TASER began well before then.

“My last day with Albuquerque PD is September 6th as I will be retiring,” Schultz wrote in an email on Aug. 28, 2013 to TASER representative Andrew Grayson. “I will however, still have the ear of the Mayor and [the chief administrative officer] on department issues (at least through the election), so if you run into any problems give me a shout.”

Schultz entered “early retirement” on Sept. 6, 2013, which allowed him to earn credit with the Public Employees Retirement Association, but still stayed with APD through the end of the year.

The auditor’s “risk review” of TASER’s contracts with the city concludes that Schultz and representatives from the company discussed career opportunities while the contract went forward.

“As the September 2013 contract was being processed, the Chief and TASER were engaged in discussions of whether there was anything the Chief could ‘do for [the TASER representative] or Taser, especially to talk about my-our experiences,’” the report reads. “TASER was courting ‘progressive thinkers and great presenters,’ in which category it included the Chief.”

Schultz began consulting for TASER in October 2013 while he was still on the city’s payroll.

His “overlapping” of both jobs constitutes “the probable violation of City Conflict of Interest and Public Purchase ordinances and the Governmental Conduct Act,” according to the report.

The police department’s relationship with TASER dates back to 2007, though the city had been purchasing the company’s items indirectly before then. That year, the department entered a sole-source contract with the company to buy laser sights, digital power magazines and other equipment.

By 2011, the police department entered another sole-source contract with TASER, this time for weapons.

“Nevertheless, the APD impermissibly based its March 2013 purchases on that contract through contract release orders,” the report reads. “The APD extended the term of the 2011 contract, set to expire on March 3, 2013, for an additional two years” which extended the contract to March of 2015.

These purchases, according to the report, may violate the city’s procurement code.

From the auditor’s report:

For example, the OSA reviewed documentation that included two tickets to an October 1, 2012, TASER International & SunGard IACP Party at Stingaree Night Club in San Diego, California. The Chief and the then-Deputy Chief of Police were identified as a guests of TASER. On October 10, 2012, APD employees attended an “ALL-EXPENSE PAID” training certification program in Scottsdale, related to Evidence.com.  On May 28, 2013, the Chief spoke at a Major Cities Chiefs conference sponsored by TASER, in Grapevine, Texas, on the topic of “Improving Effectiveness, Efficiency While Building Public Trust Through the Use of Technology and the Cloud.”

Scrutiny over the police department’s relationship with TASER isn’t limited to city contracts with the company. Last month, KRQE-TV reported that an officer involved in the infamous James Boyd shooting used a discontinued shotgun against the homeless man.

TASER discontinued the shotgun used against Boyd two months before the deadly shooting. An officer who witnessed the shooting testified in a lawsuit that the shotgun’s malfunction played a key role in how the Boyd events unfolded, according to KRQE.