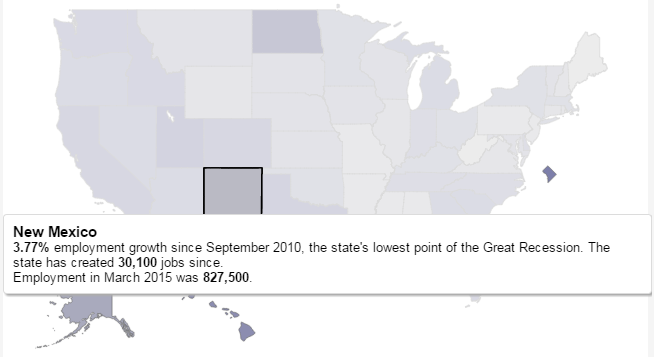 While recent news has shown New Mexico is adding jobs, a report from Stateline at the Pew Charitable Trusts shows that New Mexico is still far from average when it comes to filling the hole dug by the recession.

The report shows that since the worst employment numbers during the recession, New Mexico is among the states with the least amount of jobs recovery. The report cites federal data.

On average, employment has increased 8 percent among all 50 states and the District of Columbia since each one’s individual nadir.

North Dakota, predictably, leads the pack when it comes to job creation since the worst of the recession. Since April of 2009, North Dakota’s job growth is an astounding 28.86 percent. This is largely thanks to a huge oil boom in the state because of increased hydraulic fracturing, or fracking.