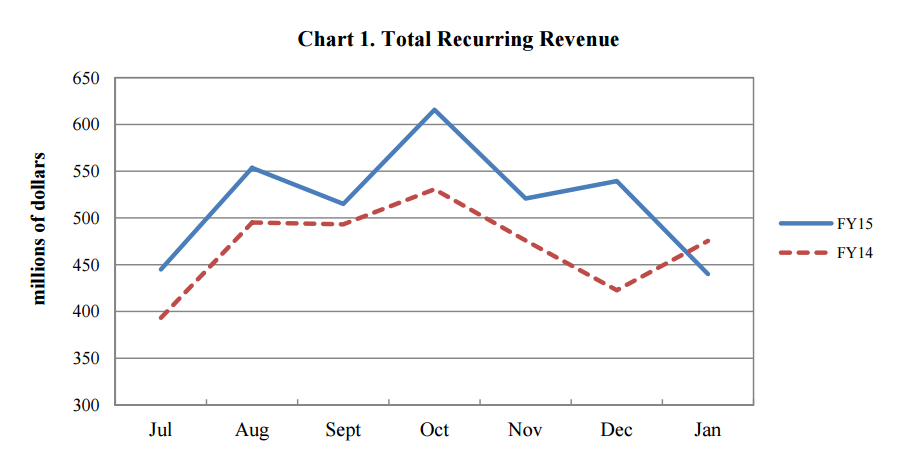 A revenue tracking report from a Legislative Finance Committee report in March of 2015.

New Mexico Political Report recently wrote about New Mexico’s trouble with accurately predicting future state revenues. The problem, it turns out, is a common one among many states and the projections are only becoming more complex each year.

A revenue tracking report from a Legislative Finance Committee report in March of 2015.

In the past 25 years, states revenue projections have become less and less accurate, according to a report released in March by the Pew Charitable Trusts and the Nelson A. Rockefeller Institute of Government.

This is largely because state revenue sources are becoming increasingly volatile. Chief among them is the corporate tax, a point that New Mexico Political Report highlighted last week.

From our previous story:

For the entire calendar year of 2015, [the Legislative Finance Committee] now projects corporate tax revenues to come in at $268 million, nearly $38 million higher than earlier predictions from this year.

But revenue projections for corporate taxes are shaky for many reasons. For one, they rely on corporate tax payments coming in consistently every quarter. Yet in reality, corporations sometimes file quarterly taxes early. Other times, they can file taxes late.

The Pew report also notes that revenue projections are even shakier during recessions. During the Great Recession, for example, a majority of states estimated tax collections to be higher than they actually were when the money came in.

There can be serious consequences for projections that miss the mark, especially given the fact that the vast majority of states require a balanced budget.

From the Pew report:

Forecasting errors can have serious consequences. Overly optimistic forecasts can prompt hurried, across-the-board spending cuts, tax increases, or borrowing when collections fall short. Alternately, forecasts that are too low can result in a one-time surplus, tempting lawmakers to cut taxes or commit to spending that is unsustainable over the long run.

The report doesn’t blame revenue forecasters. In fact, the report says, “if anything, the science of estimating tax collections has improved markedly due to advances in information technology.” The report does recommend that states conduct forecasts close to the beginning of a new budget year and constantly analyze the forecasting errors.

Read the report in its entirety below: