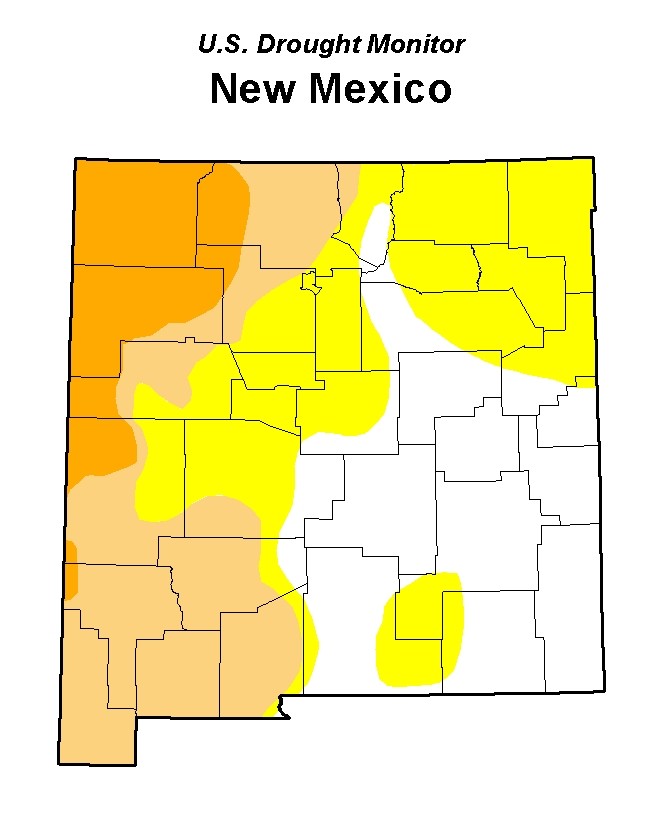 United States Drought Monitor update for New Mexico from May 19, 2015.

May rains have come through New Mexico, making the landscape a little more green than New Mexicans are used to.

May of 2015 is one of the top-ten wettest months in Albuquerque history when it comes to precipitation.

Thanks in large part to this, the May drought outlook looks better than it has in years. The May 19 update to the Drought Monitor from The National Drought Mitigation Center found that less than half of the state was in a drought. This was the first time since 2011 that this could be said.

All of this is good news. A year ago, 87.5 percent of the state was in a severe drought and 97.6 percent was in at least a moderate drought.

This means things are better in New Mexico than they have been for years. But it doesn’t mean that all of the state’s problems with drought have disappeared.

Not out of the woods

“I’m widely known as Dr. Doom and this is reinforcing my reputation because I think people are getting very much in front of themselves,” King told New Mexico Political Report.

He said the drought monitor is more like a “snapshot” of what is happening now.

“Drought is not an instantaneous thing,” he said. “It integrates over time.”

He said a good, if imperfect, indicator is looking at Elephant Butte and how close to capacity it is. Right now, the state’s largest reservoir is at 20 percent capacity.

A look at reservoir volumes from the Climate Assessment for the Southwest, as of the end of April 2015.

The last time Elephant Butte hit capacity was at this level, King said, was nearly two decades ago in the late 1990s.

The major way that Elephant Butte, and other reservoirs throughout the state, fill up is from snow melting in the Spring. For the past few years, New Mexico’s snowpack has been below average, leading to reservoirs like Elephant

The rains won’t save us from all of our drought-related ills, however. That still takes snow, and this winter was not generous with it throughout much of the West. Snowpack usually peaks in the region around April 1, but this year at that time, thanks to a balmy March and an unremarkable dusting, it was rapidly melting out.

One reason why people are celebrating the latest drought numbers is that they are better than recent years. Of course, recent years were the worst on record when it came to drought in New Mexico.

On his blog, former Albuquerque Journal science reporter and current Writer in Residence in the Water Resources Program at the University of New Mexico John Fleck, who has extensive experience in reporting on water and drought in New Mexico, put it into perspective.

“If you get too optimistic about the way things are looking right now, it’s a really good sign that your standards have really, really dropped,” King said.