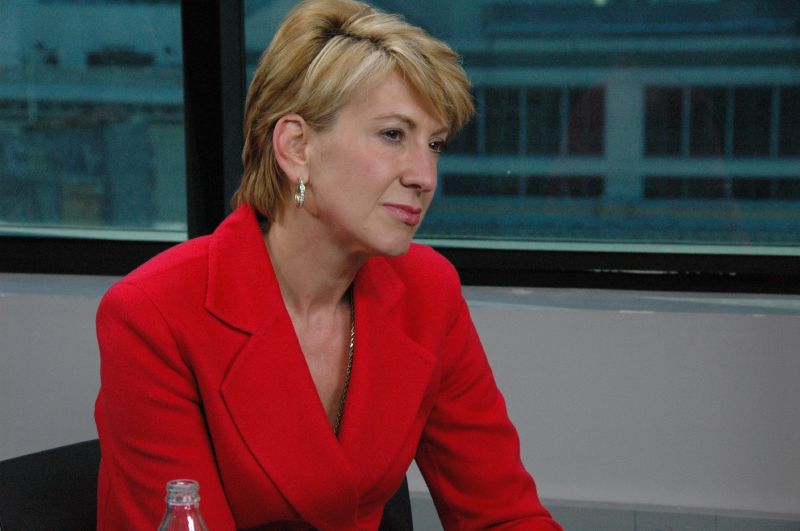 The Republican Party of New Mexico’s biggest fundraiser of the year netted one of the candidates seeking the Republican presidential nomination in 2016.

Carly Fiorina, the former CEO of Hewlett-Packard and former candidate for U.S. Senate in California, keynoted the Silver Elephant Event fundraiser Saturday night at the Hyatt Regency Tamaya in Bernalillo. Roughly 325 people, including Gov. Susana Martinez, U.S. Rep. Steve Pearce and a slew of local Republican legislators, came to the event, which cost a minimum of $200 per plate.

Although she has received plenty of media coverage so far, Fiorina is a longshot candidate for the Republican presidential nomination. Real Clear Politics, which averages the latest public opinion polls across the country, currently shows Fiorina with just 1.5 percent support among national Republicans, putting her in 14th place of a potential 15 Republican presidential candidates. Fox News announced only the top-ten candidates in polling will be allowed onstage during the first Republican debate, which could land Fiorina’s campaign in trouble if she does not gain more support soon.

Both Martinez and Pearce spoke before Fiorina, but stopped short of formally endorsing her this early in the election season.

“I want a Republican in the White House who believes in the same things we do,” Martinez said.

Pearce said that he liked Fiorina’s ability to “get right back at the media when they pitch things at her.”

“That spunkiness is going to carry her a long way,” he said.

Indeed, Fiorina began her speech by criticizing the nature of some of the questions reporters and others have asked her since she announced her presidential run three weeks ago. She lamented that one of the questions dealt with whether “a hot dog was a sandwich.”

“Apparently there’s some controversy over this,” she said to chuckles in the crowd.

That question actually came during a chat on the new service Periscope, which allows anyone to livestream to followers online.

Almost immediately after her speech began, Fiorina went into attack-mode against Hillary Clinton, a tactic that so far has been labeled the hallmark of her campaign. Fiorina mentioned how last week while she was in Columbia, South Carolina she learned Clinton was also “in the same city, on the same street” at a fundraiser.

“And because she was not opening her event to the press, I decided to have a press conference across the street,” Fiorina said. “Not just to answer questions, but to ask questions.”

Clinton is the frontrunner to land the Democratic nomination.

These included questions about the many financial issues at the embattled Clinton Foundation and Clinton’s role in the Benghazi killing of U.S. Ambassador J. Christopher Stevens, she said. Clinton was Secretary of State during the 2012 attacks on the U.S. consulate in Benghazi.

The New York Times reported that Fiorina abruptly ended her South Carolina press conference after answering 11 questions, many of which “seemed to treat her more as a heckler pulling a stunt than as a formidable candidate making an otherwise significant campaign stop.”

One reporter asked if Ms. Fiorina was being used by the men in the Republican field to harass Mrs. Clinton.

Ms. Fiorina insisted she had planned her trip here “many, many weeks ago, so perhaps she’s following me.” She said she had lots more to offer than merely Clinton-bashing.

Both Hillary and Bill Clinton, Fiorina argued during her speech, represent the “personification” of a “professional political class in Washington D.C. that cares more about the protection of its power and its privilege than it does about doing the people’s business.”

Fiorina also railed against “big government,” stating that “the potential of this great nation is being crushed by the weight, the power and the ineptitude of the federal government.” But perhaps more interesting was her criticism of how that “big government” plays into “crony capitalism,” especially coming from the former head of a powerful multi-national corporation.

“Our government now is so big, so powerful, so complex, so complicated, so corrupt, that only the big, the powerful, the wealthy and the well-connected can handle it,” she said.

Fiorina then spoke of how, as head of a powerful multi-national corporation, she was able to work through this system but others couldn’t.

“I was a CEO of a $90 billion firm,” she said. “If I didn’t like what Washington was doing, I could do something about it. I could hire lawyers, accountants, lobbyists. That little nine-person real estate company can’t do that.”

Reforms like the Dodd-Frank bill that attempted to prevent “too big to fail” big banks only kills smaller businesses, Fiorina argued.

After touching on subjects like national security—she said she wants to build a missile defense system in Poland and arm the Ukrainians against Russia—Fiorinia left the room to get back on the road.

Fiorina did not take questions from the press.