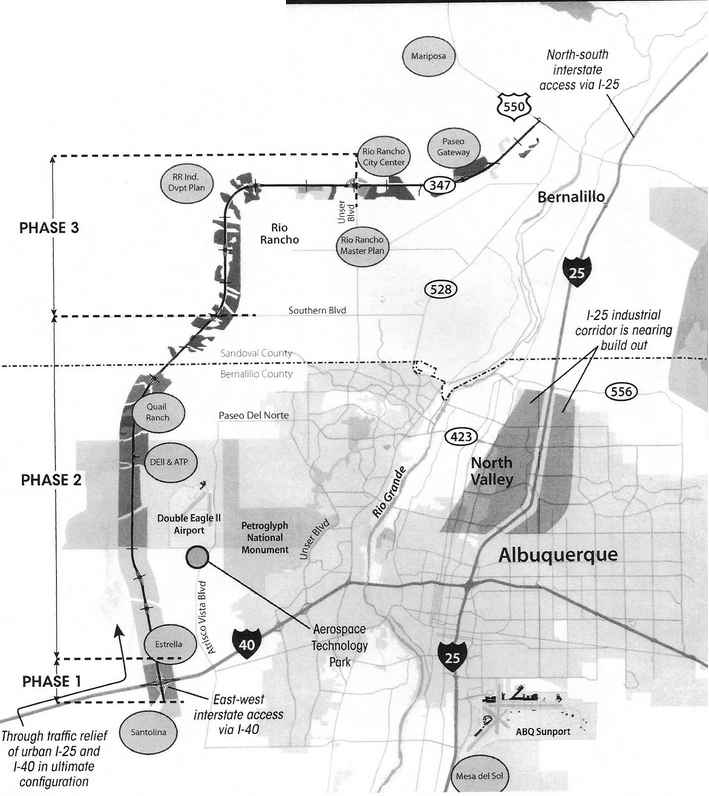 A map of projected West Side developments, including the full Paseo del Volcan extension. Map from a handout at a West Side legislators meeting.

In the capital outlay bill passed in this week’s brief special legislative session, lawmakers included more than $2 million to work on a major road that would play a big role in proposed development of Albuquerque’s West Side.

A map of projected West Side developments, including the full Paseo del Volcan extension.
Map from a handout at a West Side legislators meeting.

Specifically, lawmakers granted nearly $1.5 million for an “interchange row” between Paseo del Volcan and I-40 and another $600,000 for rights of way purchase for Paseo del Volcan.

Currently, Paseo del Volcan covers just seven miles of Rio Rancho. Yet plans for the major roadway expansion, pictured right, show it stretching all the way down to I-40, going past landmarks of several controversial proposed developments, most notably the Santolina planned community.

As New Mexico Political Report previously reported, many of the proponents behind the bypass expansion are also behind Santolina and other West Side developments.

They include Dick Minzner, an Albuquerque attorney who lobbied during the session for Western Albuquerque Land Holdings (WALH), which claims title the land Santolina would be built on, and Vanessa Alarid, a consultant for Garrett Development Corporation, an asset holder for WALH.

“We are trying to open up land on the West Side that will be available for economic development opportunities,” Minzer said in April. “That access route serves a very, very useful purpose.”

Opponents of these projects, on the other hand, criticize them as contributing to unsustainable urban sprawl.

During the general legislative session this year, lawmakers also earmarked another $1 million to Paseo del Volcan bypass expansion in a separate bill reauthorizing past capital outlay projects. That puts a total of at least $3 million marked for the bypass, a small amount compared to the bypass expansion’s estimated $91 million cost.

In other words, it might not be enough to make the project shovel-ready. In April, Legislative Finance Committee analyst Linda Kehoe told New Mexico Political Report that major highways usually require having 10 percent of the projected cost available to spend in order to go forward.

The Santolina master plan, however, could be green-lighted for approval very soon. In December, the Bernalillo County Planning Commission recommended approval of the master plan, which calls for developing nearly 22 square miles of land into homes for up to 90,000 people over the next 40 to 50 years.

Last month, the Bernalillo County Commission rejected multiple legal appeals from Santolina opponents that would have put the brakes on the master plan. An attempt earlier this month by Albuquerque City Councilor Isaac Benton to let city government weigh in on approval of the master plan also went nowhere.

Though Bernalillo county commissioners will congregate this evening, a vote on Santolina isn’t scheduled for the meeting.