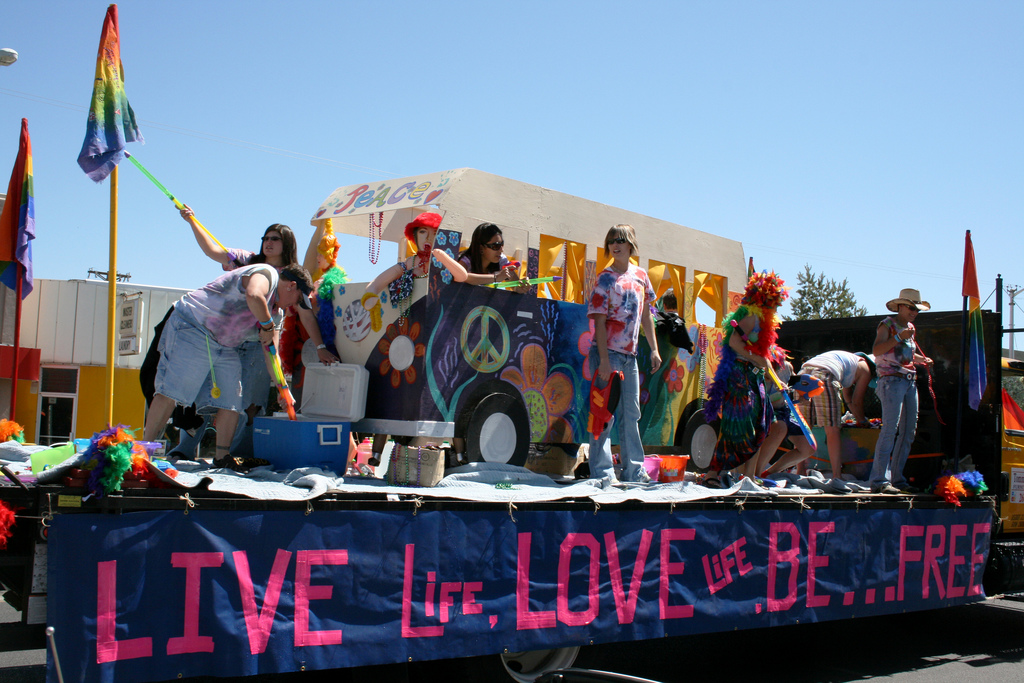 One summer nearly 40 years ago, a group of roughly 25 people gathered on Central Avenue to march for gay rights in Albuquerque.

It was the summer of 1976, seven years after the Stonewall Riots in Greenwich Village that launched Gay Pride marches in cities throughout the United States. That year, Juniper, a local gay rights advocacy group, and Albuquerque’s Metropolitan Community Church put together the city’s first Pride March.

“There was little notice,” PJ Sedillo, a special education professor at New Mexico Highlands University who led Albuquerque Pride through the 1990s and 2000s, said. “Some people went different directions.”

Some of the marchers from that first year ended up in Morningside Park, where Pride now kicks off annually with a candlelight vigil.

By 1977, the second Pride parade swelled to around 100 marchers, this time partly because the event was formally organized. The march began on Central Avenue at a now-closed bar called Fox’s Booze and Cruise. It continued on the north side of the major street, ending at San Mateo Boulevard in northeast.

Yet plenty of roadblocks stood in the way.

“There were eggs hurled at them and people honking,” Sedillo said.

In the ensuing years, Albuquerque Pride marches continued on an informal basis. Sedillo first attended one in 1989. By then, an estimated 300-400 people were showing up to Pride.

At the time, Sedillo was a teacher at Atrisco Elementary School. That year, the Pride march ended in Yale Park near the University of New Mexico campus, where Sedillo saw a crew of reporters covering the event.

“I was hiding behind the building,” he said. “I didn’t know if I was going to be fired or not.”

With the help of a mentor, Sedillo said he had a “metamorphosis that I’m not going to live my life like that.” Soon, he helped lobby the school board to pass an anti-discrimination law that barred district employees from being retaliated against on the basis of sexual orientation.

At Albuquerque Pride in 2012.
Photo Credit: JobyOne via
cc

In the ’90s, Sedillo became more involved. In 1996, he took part in a national inter-pride coalition and attended its conference in Kansas City. There, he learned that religious right groups were purchasing the trademarks of pride events across the country in an attempt to prevent actual gay rights groups from using the name.

He came back to New Mexico and trademarked Albuquerque Pride to prevent this from happening at home.

“It was very, extremely controversial at the time,” Sedillo said. “I took a lot of heat from the community because they thought my intentions were to make it into a business.”

But in all his time serving for Pride, Sedillo maintained that he never saw a penny for his work.

That same year, he took out $1,500 on his own credit card to pay for the entire event. This was all a part of a strategy to continue to allow the event to grow. In 1998, Sedillo helped decide that the march should end at the New Mexico State Fairgrounds. The march still ends there today.

As the years went on, Pride continued growing, and by 2004 it was the third-largest parade in the state. That year, it earned honors as best parade from the Weekly Alibi, an alternative weekly based in Albuquerque. As the event grew larger, the cost to run the event went up to $75,000.

That didn’t mean, however, that Pride was fully accepted in the community.

Around that time, Pride decided to start entering a float into the annual New Mexico state fair parade. At first it was a success, winning first place.

Though outnumbered, some continue to protest the event.
Photo Credit: rachelbinx cc

But in 2005, Pride’s float spelled out the words “gay, lesbian, bisexual and transgender” on it, causing panic from some of the people watching in the crowd, according to Sedillo. Sedillo said some parents covered their children’s eyes as others spit at the people carrying the float.

To him, it was a reminder that no matter how far a community may come over the years, “you just need one person who has so much hatred in themselves they go after an entire group.”

Pride events today have grown into the mainstream and can cater to a wide variety of groups and people. But every event attracts at least a few picketers with “horrible signs,” Sedillo said.

It’s a reminder to him that while Pride is a time to celebrate, it’s also time to remember that history can repeat itself.

“I hope people don’t lose the meaning of what Pride is about,” he said, echoing the riots in Stonewall that marked “the first instance in history homosexuals fought back.”

Sedillo dropped his formal role in Albuquerque Pride in 2010, but this year he’s organizing archives of the event’s four decades of history in Albuquerque. They’ll be on display at the State Fairgrounds at the Native American Arts Building this Saturday after the parade.