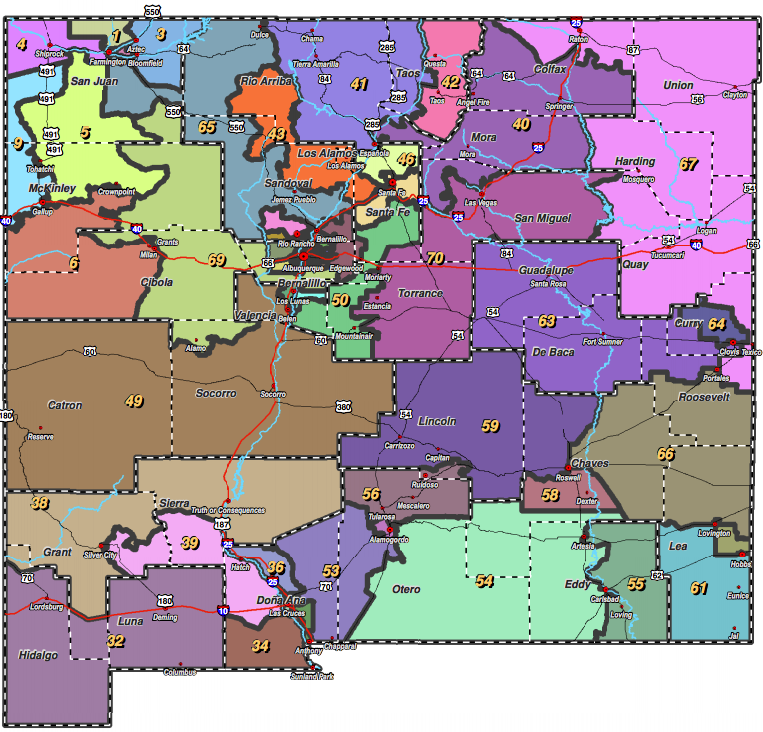 A ruling by the U.S. Supreme Court on Monday leaves the door open for a big change to New Mexico’s redistricting system–if legislators and voters choose to implement the changes.

New Mexico state House of Representative districts, as drawn by a judge in 2011.

The nation’s high court ruled 5-4 on Monday that an independent redistricting commission in Arizona is constitutional. Arizona is one of sixteen states with similar processes for redistricting.

Supporters of such commissions say that by taking the decision out of the hands of partisan politicians, oddly shaped districts designed to protect one party or politician will no longer be the norm. Opponents argued that this meant legislators would be abrogating their constitutional duty on making districts for elections.

One of the interested observers in New Mexico was State Sen. Bill O’Neill. The Albuquerque Democrat has introduced legislation to create an independent redistricting commission in New Mexico in each of the last three legislative sessions.

With the Supreme Court decision, O’Neill is free to bring it back for a fourth year.

“Gerrymandering is the root of so much of our political dysfunction nationally and statewide,” O’Neill told New Mexico Political Report Monday morning following the decision.

O’Neill said that he understands it would be tough to ask legislators, and the governor, to give up the power of redistricting. Still, he sees it as the right thing to do.

“The larger good is served by having individual people, engaged citizens with no agenda coming up with a rational, reasonable redistricting plan,” O’Neill said.

O’Neill has worked with Common Cause New Mexico and the state’s League of Women Voters chapter on the proposed change, which would need to be a constitutional amendment.

Jessica Ring Amunson–a partner at Jenner and Block who authored an amicus brief on behalf of Campaign Legal Center, the League of Women Voters of the United States, the ACLU, Common Cause, and Democracy 21–said on a Common Cause press call following the vote that the decision was “a total victory” for supporters of independent redistricting.

“The practice of partisan gerrymandering has reached unprecedented levels in the United states,” Amunson said, adding that such gerrymandering leads to voter apathy and reduced voter participation.

Arizona, and many other states, approved independent redistricting processes through a voter referendum. New Mexico is not a state with voter referendums. But Common Cause National Redistricting Director and California Executive Director Kathy Feng noted there are efforts in non-referendum states, mentioning Virginia.

“In all variations, there are very excited activists across the country who are ready to move forward,” Feng said.

In New Mexico, the current redistricting process is laid out in the state constitution, so to change the process it would need to be done through a constitutional amendment. This means a bill would have to pass both the House and Senate with a majority of the full chamber, then it would go to voters in the next election.

The governor would not be specifically involved in the process.

In each of the past two redistricting attempts in New Mexico, the state has seen how political gridlock can impact redistricting. The Democratic-led Legislature saw redistricting maps vetoed by Republican governors in both 2001 and 2011, resulting in a judge drawing the lines based on the existing districts.

This means the districts in New Mexico for congressional and legislative seats are based on the lines drawn in 1991.

“Heck yeah,” he said. “It wouldn’t be a session without me introducing this.”