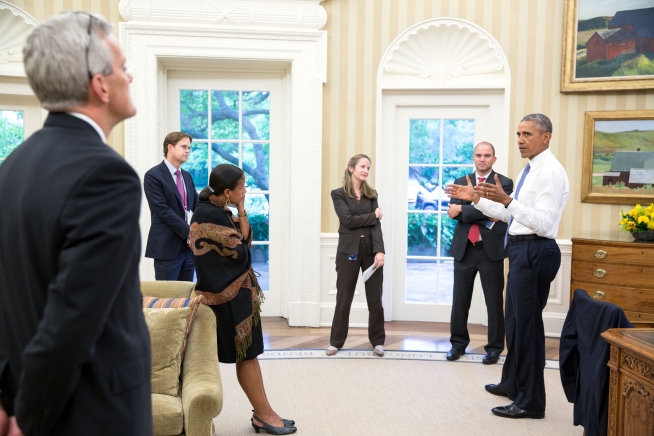 President Barack Obama talks with national security staff in the Oval Office after being notified of the nuclear agreement with Iran on July 13. Photo Credit: Pete Souza, White House

The two members of the U.S. Senate from New Mexico, both Democrats, support a deal on nuclear weapons with Iran announced by President Barack Obama Tuesday morning.

President Barack Obama talks with national security staff in the Oval Office after being notified of the nuclear agreement with Iran on July 13. Photo Credit: Pete Souza, White House

“Today, because America negotiated from a position of strength and principle, we have stopped the spread of nuclear weapons in this region,” Obama said in remarks on Tuesday morning. “Because of this deal, the international community will be able to verify that the Islamic Republic of Iran will not develop a nuclear weapon.”

The agreement came after negotiations between U.S. Secretary of State John Kerry, a former member of the Senate, and a representative from Iran. Britain, China, France and Russia—which make up the other four members of the United Nations Security Council permanent members—as well as Germany were also involved.

The deal has already been heavily criticized by Republicans, including those running for president. The Republicans say it opens the door for Iran to build nuclear weapons, while Democrats say it does the opposite.

“This deal breaks each and every pathway to a weaponized nuclear device, including any potential covert effort,” Heinrich said in a statement.

“In the first eight years of this century, Iran’s nuclear program surged ahead rapidly, adding thousands of centrifuges, building complex nuclear facilities, and stockpiling enough highly enriched uranium to build a number of bombs,” Heinrich continued. “Today’s accord slashes that stockpile to a mere fraction of the material necessary to build a single device, unplugs thousands of centrifuges, and it opens those facilities to international inspection.”

U.S. Sen. Tom Udall called the deal “a historic step for international cooperation and our shared goal of reducing the threat of a nuclear-armed Iran.”

He also said that Congress will have a key role in the specifics of the deal.

“We all agree that a nuclear-armed Iran is a serious threat that must be prevented. This is the greatest nuclear nonproliferation challenge of our time, and it is a challenge that we must meet,” Udall added.

Heinrich wondered at how much the Senate Majority, led by Republicans, would be open to discussing the deal.

“It is my experience that the current Senate Majority Leader and his caucus are struggling to keep the government funded and the Highway Trust Fund solvent, so you’ll forgive me if I doubt they could negotiate a better accord and hold together the international coalition necessary for enforcement,” Heinrich said of the Republican response.

Senate Majority Leader Mitch McConnell, R-Ky., criticized the deal in a statement announcing the Senate would review the plan.

“The comprehensive nuclear agreement announced today appears to further the flawed elements of April’s interim agreement because the Obama Administration approached these talks from a flawed perspective: reaching the best deal acceptable to Iran, rather than actually advancing our national goal of ending Iran’s nuclear program,” McConnell said.

“I commend President Obama, Secretary Kerry, Secretary Moniz and our allies for their commitment to halting Iran’s nuclear weapons ambitions,” Rep. Ben Ray Luján said in a statement about the deal. “Congress must carefully consider the terms of this agreement, and I will take a close look at all of the details.  It is critical that it includes strong safeguards and transparency provisions that hold Iran accountable.”

“I have said that a negotiated agreement forged with our international partners is the best option to prevent Iran from acquiring nuclear capabilities. I still believe that,” Rep. Michelle lujan Grisham said in a statement Tuesday afternoon. “However, I am cognizant that this is still an agreement between adversaries.”

“Before the international community provides sanctions relief, Iran needs to allow inspections and access to all sites accompanied by the strongest verification process possible,” she added.

Rep. Steve Pearce, the lone Republican in the New Mexico delegation, was not in favor of the agreement.

“I believe the President’s deal will only accelerate Iran’s nuclear ambitions and ability to bring harm to Americans and our allies in the region,” Pearce said.  “As Israel Prime Minister Benjamin Netanyahu warns, this deal is ‘a bad mistake of historic proportions.'”

“Our national security is in jeopardy, as the Administration allows a known state-sponsor of terror to accumulate the wealth and materials necessary for nuclear proliferation,” he continued. “Dangerously, the agreement does not reflect Tehran’s past nuclear development or deny its capability to build secret sites to support their ambitions.”

It is unlikely that Republicans, who control both the House and Senate, will be able to block the deal. Even if both chambers passed resolutions to stop the deal from going into effect, Obama has pledged a veto.

It would take a two-thirds vote in each chamber to override the veto, unlikely with Democrats largely in support of the deal.

Update 2: Statement by Rep. Steve Pearce added to the story.