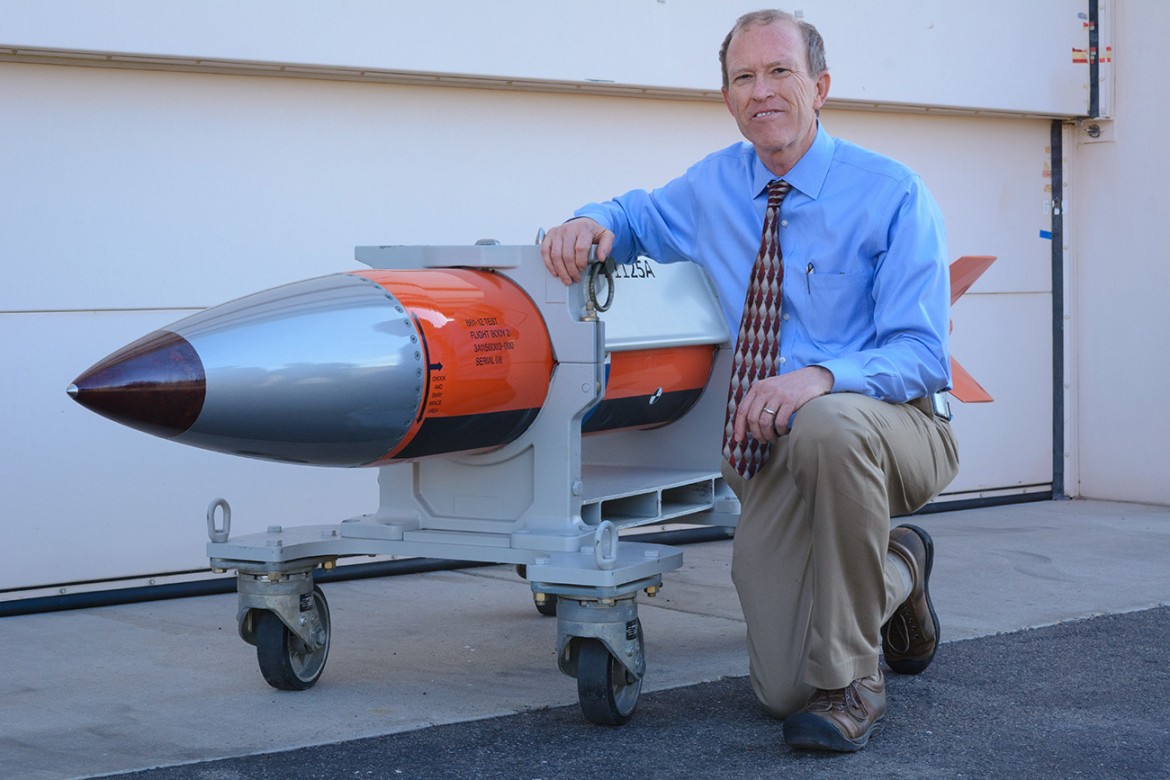 Phil Hoover, an engineer at Sandia National Laboratories, shows off a flight test body for a B61-12 nuclear weapon. Sandia engineers have spent the past few years designing, building and testing the top-secret electronic and mechanical innards of the bomb. Photo Credit: Jerry Redfern for Reveal

This story was originally published and produced by Reveal from The Center for Investigative Reporting.

ALBUQUERQUE, N.M. – Standing next to a 12-foot nuclear bomb that looks more like a trim missile than a weapon of mass destruction, engineer Phil Hoover exudes pride. “I feel a real sense of accomplishment,” he said.

Phil Hoover, an engineer at Sandia National Laboratories, shows off a flight test body for a B61-12 nuclear weapon. Sandia engineers have spent the past few years designing, building and testing the top-secret electronic and mechanical innards of the bomb. Photo Credit: Jerry Redfern for Reveal

He and fellow engineers at Sandia National Laboratories have spent the past few years designing, building and testing the top-secret electronic and mechanical innards of the sophisticated B61-12.

Later, when nuclear explosives are added at the federal Pantex Plant near Amarillo, Texas, the bomb will have a maximum explosive force equivalent to 50,000 tons of TNT – more than three times more powerful than the U.S. atomic bomb dropped on Hiroshima, Japan, 70 years ago this August that killed more than 130,000 people.

The U.S. government doesn’t consider the B61-12 to be new – simply an upgrade of an existing weapon. But some contend that it is far more than that.

Hans Kristensen, a nuclear weapons expert at the nonpartisan Federation of American Scientists in Washington, is resolute that the bomb violates a 2010 Obama administration pledge not to produce nuclear weapons with new military capabilities.

“We do not have a nuclear guided bomb in our arsenal today,” Kristensen said. “It is a new weapon.”

Kristensen’s organization was formed in 1945 by nuclear scientists who wanted to prevent nuclear war. And it’s not the maximum force of the B61-12 that worries him the most on that front.

Instead, he says he fears that the bomb’s greater accuracy, coupled with the way its explosive force can be reduced electronically through a “dial-a-yield” system accessed by a hatch on the bomb’s body, increases the risk that a president might consider it tame enough for a future conflict.

Congress shared similar concerns in rejecting other so-called low-intensity nuclear weapons in the past. But most of the national criticism of this bomb has focused on its price tag. After it goes into full production in 2020, taxpayers will have spent about $11 billion to build 400 B61-12 bombs. That sum is more than double the original estimate, and, even at that, is a fraction of costs associated with modernizing the U.S. nuclear arsenal.

To Kristensen and others, if President Barack Obama’s pledge was serious, the bomb shouldn’t exist at any price.

How the B61-12 entered the U.S. arsenal of weapons is a tale of the extraordinary influence of the “nuclear enterprise,” as the nuclear weapons complex has rebranded itself in recent years. Its story lies at the heart of the national debate over the ongoing modernization of America’s nuclear weapons, a program projected to cost $348 billion over the next decade.

This enterprise encompasses defense contractors, including the subsidiary of Lockheed Martin Corp. that runs the Sandia labs here for the government, as well as the U.S. Department of Energy and the nuclear weapons-oriented wings of the U.S. military – particularly the Air Force and Navy. With abundant jobs and dollars at stake, the nuclear enterprise is backed by politicians of all stripes.

That relationship begins with money.

Since 1998, these four contractors have contributed more than $20 million to congressional campaigns around the nation. Last year alone, they spent almost $18 million lobbying Washington.

Those numbers alone indicate that the nuclear weapons enterprise has had plenty at stake in recent years.

In Prague in 2009, Obama called for the elimination of nuclear weapons. A year later, he and Russian leader Dmitry Medvedev signed the New Strategic Arms Reduction Treaty calling for each country to reduce its deployed strategic warheads to 1,550 by 2018, down from estimates of more than 1,900 for the United States and more than 2,400 for Russia.

Ratification of the treaty required a two-thirds majority vote in the Senate, which followed in December 2010. Defense hawks and their allies exacted a price for the treaty vote: $85 billion in nuclear weapons modernization over a decade. The Congressional Budget Office says the figure has since more than quadrupled.

The new bomb’s name, B61-12, reflects its position as the 12th model of what the government calls a family of bombs. It is descended from the first U.S. hydrogen bomb tested in the Marshall Islands in 1952, which used a plutonium bomb to detonate a thermonuclear explosion 520 times more powerful than the plutonium bomb tested seven years earlier – the nation’s first – at the remote Trinity Site south of Albuquerque.

The current stockpile contains five B61 models, three of which – along with one other strategic bomb – will be supplanted by the B61-12.

But unlike the free-fall gravity bombs it will replace, the B61-12 will be a guided nuclear bomb. Its new Boeing Co. tail kit assembly enables the bomb to hit targets precisely. Using dial-a-yield technology, the bomb’s explosive force can be adjusted before flight from an estimated high of 50,000 tons of TNT equivalent force to a low of 300 tons.

And that’s where the debate over the B61-12 moves beyond cost overruns, zeroing in on the granular details of its capabilities.

Obama pledged that the United States would produce no new nuclear warheads and that life extension programs of existing weapons would not provide “new military capabilities.”

Officials from the Obama administration, Pentagon and Energy Department continue to argue that the B61-12 stays within the bounds of that pledge by modernizing an aging family of bombs and in the process ensuring a reliable nuclear arsenal to scare off adversaries.

Back at Sandia, engineer Phil Hoover is the one in charge of integrating the tail kit instruments with those inside the weapon’s body.

“The tail kit provides the ability to get more accuracy,” he said. “We’re reducing the potential for collateral damage.” This kind of guided system, he continued, is “consistent with our digital aircraft today.”

High on the list of aircraft that could carry the bomb is Lockheed’s new F-35 fighter jet. This stealth plane, designed to evade radar, is a $400 billion weapon delivery system that has been plagued by technical problems and cost overruns.

Alison Henry (left) of Farmington, N.M., gives directions to her grandmother as she takes a photo of the obelisk marking the site of first atomic bomb test at Trinity Site at White Sands Missile Range. Credit: Jerry Redfern for Reveal

The idea of stealth fighters carrying B61-12 nuclear bombs worries some outside experts, including Kristensen.

“If the Russians put out a guided nuclear bomb on a stealthy fighter that could sneak through air defenses, would that add to the perception here that they were lowering the threshold for the use of nuclear weapons?” he asked. “Absolutely.”

Maj. Kelley Jeter, an Air Force spokeswoman, declined to be interviewed, but agreed to answer questions via email. Asked what effect stealth fighter jets carrying low-yield B61-12 nuclear bombs would have on an adversary during a conflict, she responded: “To effectively deter potential adversaries, the weapons and platforms fielded by the Air Force must credibly provide options for the President to demonstrate U.S. resolve and support deterrence options for the President to deal with emerging crises.”

But, she added, “the B61-12 will not provide new military capabilities.”

This story was produced and originally published by Reveal from The Center for Investigative Reporting, a nonprofit news organization and public radio show based in California. Learn more at revealnews.org. This version was digested for length by Rocky Mountain PBS I-News. Len Ackland can be reached at lenackland@gmail.com, and Burt Hubbard can be reached at burt.hubbard@gmail.com.