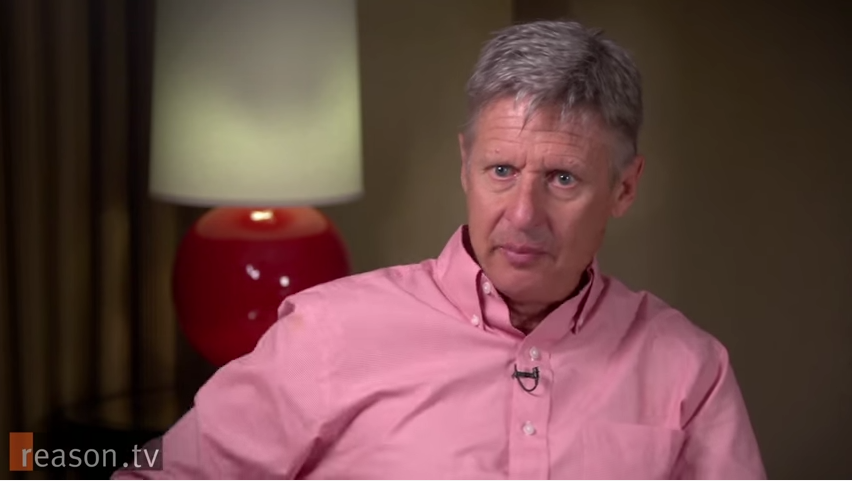 Former New Mexico Governor Gary Johnson has popped up every so often in libertarian circles in recent years and in the latest, an interview with Reason TV, he hit a number of hot button topics.

As the first governor in the nation to call for the legalization of marijuana, and while speaking to the editor in chief of a libertarian magazine, marijuana of course came up.

But the former Libertarian presidential candidate also talked about presidential politics, including slamming Donald Trump as appealing to what he called a racist set of voters.

“He is appealing to a segment that I’ll just label racist,” Johnson said. “And it exists and it’s out there and, you know what, I don’t want anything to do with it.”

The full video is available at the bottom of the post.

Johnson said that he thinks that the voting public will paint the entire Republican Party racist because of Trump.

He didn’t pull punches on other presidential candidates like Jeb Bush or Hillary Clinton.

Clinton, to Johnson, is “a continuation of the status quo.”

“Is this country of 300 million people only capable of being governed by two families?” Johnson asked.

Johnson says balancing the budget is the number one problem in the country.

“The Republican Party left me flapping in the wind,” Johnson said. He criticized the party for how the debates work and for not allowing him in the race based on polls he was not included in.

Johnson also spoke about immigration and was critical of the Republican Party.

He said that it is “just wacko” to propose building a border fence, something advocated by his former party.

Much of the conversation focused marijuana. Johnson is the CEO of Cannabis Sativa Inc., a marijuana company.

Johnson said it would be legal in much of the country soon.

“I think we’ve reached the tipping point,” Johnson said of legalization of marijuana. “The wall, it’s falling. When it actually crashes, I predict 2016 California at the ballot box makes recreational sales legally. And then I believe overnight 20 states—overnight—will legislate it and governors will sign it.”

The conversation took place at FreedomFest, a gathering of libertarian-minded people in Las Vegas, Nevada, earlier this month.

As for another crack at running for President? He said he hopes to run again as a Libertarian, but did not announce his candidacy.