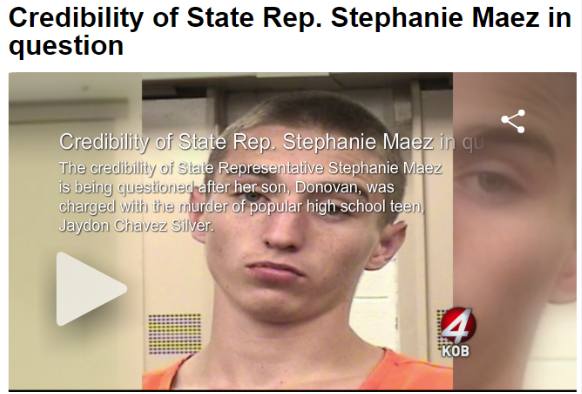 KOB-TV is backing off of a controversial story that appeared on the same day news broke that a suspect charged with murder is the son of a New Mexico state representative.

The story, titled “Credibility of State Rep. Stephanie Maez in question,” quoted extensively from an unnamed woman who told the TV station Donovan Maez had been homeless since age 11.

Stephanie Maez is the mother of Donovan.

Donovan, 18, was arrested on multiple charges Friday evening for the late June killing of Jaydon Chavez-Silver.

In the KOB story, which aired Saturday, the unnamed woman said she hosted Donovan at her house in the past but later kicked him out because “he had no manners; he had no conscience about things.” The woman also criticized Stephanie Maez, saying that if she “had taken care of her son, maybe Jaydon wouldn’t have lost his life and that mother wouldn’t have lost her son.”

But by the next day, the TV station had taken the entire story off of its website with no explanation.

Any links to the story now went to a 404 error page, including a link from KOB’s Twitter account.

News Director Michelle Donaldson told New Mexico Political Report that she made the decision to pull the story offline after she “came into some information that Donovan was not being truthful” about his homelessness.

She also noted that the homeless claim was attributed to someone quoted in the story and not reported as fact.

“The story itself, every word is true,” Donaldson said, adding that she wasn’t planning to issue a formal retraction when asked.

Then why pull the story in the first place?

“I just don’t think it serves any purpose to allow him to continue making that claim,” Donaldson said, again attributing the mistake to Donovan and not the anonymous woman quoted in the story.

Veteran New Mexico journalist Heath Haussamen slammed the KOB story in a commentary on NMPolitics.net this afternoon, calling it “outrageous” and “tabloid journalism.”

Haussamen also criticized comments in the story from Bernalillo County Commissioner Wayne Johnson, who took a shot at Stephanie Maez by questioning the job ability of lawmakers “when their personal life is in such obvious disarray.”

Speculation by Johnson and an unnamed source, amplified by the megaphone KOB handed them, is nothing more than salaciousness at the expense of a grieving mother.

Donaldson couldn’t say if she regretted airing the story.

When asked whether she felt the story was fair to Stephanie Maez, Donaldson said, “I’m not scoring it” and that she wasn’t “for Stephanie or against Stephanie.”

She added that she’s a parent and her “heart goes out” to both Stephanie and the mother of Chavez-Silver.