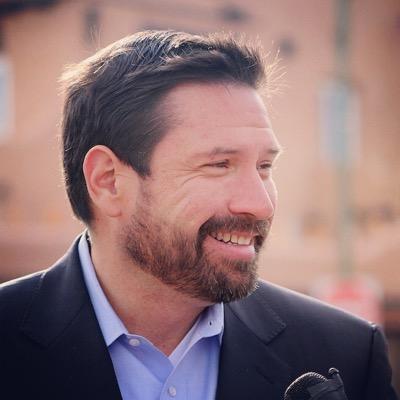 Javier Gonzales is the mayor of Santa Fe and a Catholic.

I’ve spent a lot of time this week reflecting and talking about the influence Pope Francis has had on me personally, and what his visit means. My struggle with growing up as a gay man and eventually coming out in a very traditional Catholic family is no secret. And the courage the Pope gave me when he said “Who am I to judge?” played a huge role in that.

So as I stood on the South Lawn at the White House and heard the man bring his message of hope and unity to the U.S., it was an incredibly powerful and emotional moment. But as powerful as this visit was for me, the message that Pope Francis is carrying with him transcends the personal emotional response of any individual person.

He addressed eloquently the challenges we are facing. Climate change that is a world wide security threat, a refugee crisis in Europe impacting millions and an immigration crisis right here at home that we are failing to address, the ongoing struggle against hunger and poverty and more.

In Santa Fe we are striving, in our own small but important ways, to do what we can on a local level to have an impact. Our Climate Action Task Force and Sustainable Santa Fe Commission are going to make this city carbon neutral by 2040.

We’re going to end homelessness in Santa Fe, first among veterans and then city-wide. We’re building a community fabric of organizations and people that will embrace with love and support and create opportunities for every child in Santa Fe, from birth to career. And we haven’t forgotten that ours is a country and a community built by immigrants, so we have opened our arms and will always remain committed to those families who come to this community seeking a better life for themselves and their children.

But what struck me most about this speech, what stands out for me as the biggest obstacle to solving these incredible challenges, was the recognition in his words of our simple failure to recognize one another as brothers and sisters in humanity and come together for the common good. In this way, the Pope’s speech was a wake-up call.

Coming as it did on the verge of yet another government shutdown, forced by a Republican party that is being held hostage by some of the most extreme people ever put in elected office, all for the sake of an ideological fight they cannot hope to win and on which the overwhelming majority of Americans has left them behind, the Pope’s visit to Congress is incredibly timely.

At the White House and in Congress, he spoke out against the kind of divisiveness that keeps us from working together. He warned us against the temptation to characterize our struggles with our opponents and our enemies, political and otherwise, to simplistic good versus evil. And he called upon us all to come together to renew the spirit of cooperation that helped build this country.

“We must move forward together, as one, in a renewed spirit of fraternity and solidarity, cooperating generously for the common good.”

That is a spirit that feels absent from the political conversation right now, as our usual partisanship and adversarial systems have devolved into demagoguery and a hatred of the other side that pays no regard to the idea that working together is the only way to move forward. If we are to overcome the challenges we are facing, it cannot stay that way for long.

So if there is one lesson we take from the historic visit by Pope Francis, let it be that politics is the means by which we come together to accomplish something greater than ourselves, an “expression of our compelling need to live as one.” And maybe in the process re-discover a little of the values of sacrifice, humility, and love for our fellow man that helped us build America.

“We know by faith that ‘the Creator does not abandon us; he never forsakes his loving plan or repents of having created us. Humanity still has the ability to work together in building our common home’” – (Laudato Si)