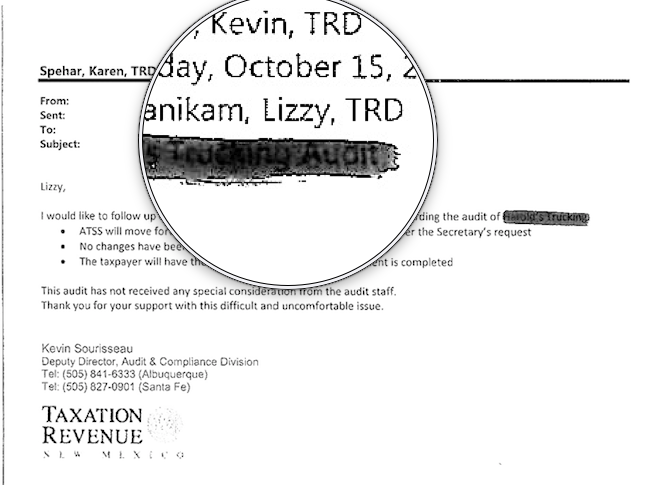 When New Mexico Political Report discovered and reported on a botched redaction from the state Taxation and Revenue Department this summer, the state responded with a threat.

Yet internal emails show at least one current tax department attorney faulted his employer, and not New Mexico Political Report, for the mishap.

“I have been telling the Department for years that we are not redacting documents properly,” tax department attorney Lewis Terr wrote in an email the same day we published the story.

Terr ended his email with a word in all caps: “IDIOTS.”

A recap: In July, State Auditor Tim Keller announced that his office conducted a preliminary investigation implicating tax department Secretary Demesia Padilla. Padilla allegedly used her position as secretary of a cabinet-level department to attempt to give preferential treatment to a business she once did accounting work for. The state Attorney General’s Office is now investigating the allegations.

While reporters dug to find the name of Padilla’s former client, all sides remained mum. In a press conference that month, Keller told the media that Padilla’s client would probably never be publicly disclosed because of laws preventing disclosure of taxpayer information.

That same month at the height of the interest, the tax department released an unsolicited email to media outlets purporting to show that Padilla made no preferential treatment of any kind. While the taxpayer’s name in the email was redacted, the name could be seen through the redaction on a bright computer screen or simple brightening of the document.

New Mexico Political Report subsequently ran a story about the botched redaction, which revealed Bernalillo-based Harold’s Grading and Trucking as the taxpayer in question.

While Cloutier faulted us for revealing the taxpayer’s name, not all of the tax department’s employees fell in with the company line.

On July 30—the same day we published the story—New Mexico satirist Jim Terr emailed the story about the botched redaction to tax department attorney Lewis Terr. The subject line in Jim’s email read “a case of NM ‘Botch’ ulism.”

“This is hilarious,” Lewis Terr wrote back. “We should use a type of tape that has the word ‘redacted’ imprinted on it.”

Jim wrote back to Lewis that he was “glad to amuse.”

Previously, the tax department cited possible disclosure of confidential taxpayer information as a reason for initially blocking two employees from cooperating with Keller’s preliminary investigation. Keller accused the department of trying to obstruct the investigation. Both employees were eventually interviewed.