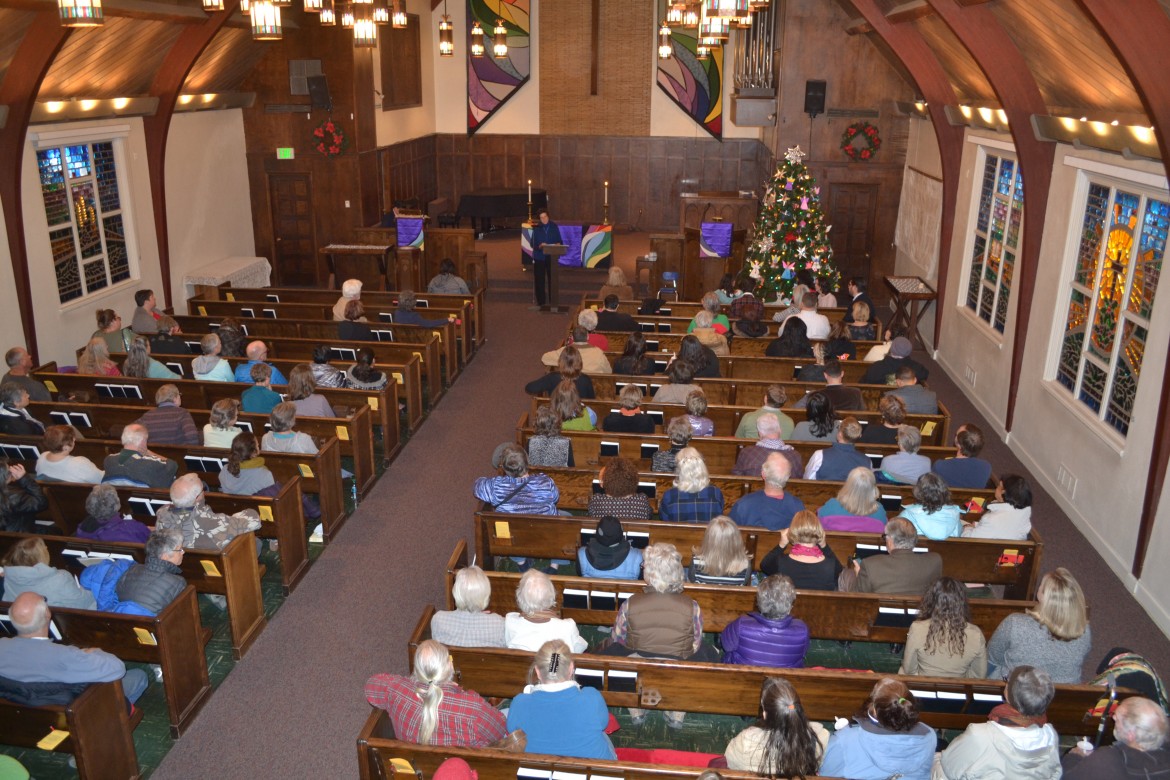 A crowd of people packed the pews at Albuquerque’s First Congregational United Church of Christ Wednesday night to support Planned Parenthood after a gunman shot and killed three people and wounded nine others at a Colorado Springs clinic last week.

The event included a candlelight vigil inside the church remembering the three who died during the Planned Parenthood shooting.

Among those who spoke were Vicki Cowart, CEO of Planned Parenthood of the Rocky Mountains, House Minority Leader Brian Egolf, D-Santa Fe, and the Rev. Sue Joiner.

“We do not have to agree on how we move forward, but we must agree that we will do it without violence,” Joiner said.

Reading from prepared statements by the leader of her denomination, Joiner called the Colorado Springs shooting “the byproduct of a collective need to shame women who seek legal, necessary, medical options when considering their reproductive health.”

Robert Dear, the shooter, reportedly said “no more baby parts” to law enforcement after the shooting.

Earlier this year, anti-abortion groups released videos that they claimed showed Planned Parenthood selling aborted fetuses for money. The women’s health organization said that it showed nothing illegal, and investigations in multiple states, most recently Florida, have shown that.

The videos led to “an unprecedented rise in hateful speech” against abortion clinics, according to National Abortion Federation President Vicki Saporta. In an interview with NM Political Report earlier this week, Saporta called the Colorado Springs shootings “the most horrific attack in the history of us recording violence against abortion providers.”

Egolf called the shooting “the culmination of decades of efforts to incite violence to demonize and also dehumanize doctors and nurses who provide medical services.”

“It just takes one conversation at a time, one person at a time to start changing the course of this debate,” Egolf said.

Speaking up, he said, “may end up saving lives in the future.”

Egolf also alluded to a proposed bill in the state Legislature earlier this year that would have allowed pharmacists to refuse to dispense medicine that results in “termination of a pregnancy.” At the time, Egolf argued that the language in the bill was so broad it would allow pharmacists to refuse selling Plan B, known as the morning after pill.

“We saw the most extreme anti-choice piece of legislation attempted anywhere in the United States,” he said at the vigil, “that would have allowed cashier at Walgreens to deny selling birth control.”

The bill, which also would have banned abortions in the third trimester of pregnancy, passed the Republican-controlled state House of Representatives but died in a Democratic-controlled Senate committee.

Cowart, who oversees Planned Parenthood in four states, including New Mexico and Colorado, where the shooting happened, said that “no matter where you live, our community was attacked.”

“This cannot be the new normal,” Cowart said. “We cannot go on like this.”

*Note: ProgressNow New Mexico helps find funding for NM Political Report but has no input or editorial control over the site, including story selection or specifics on any story, including this one.