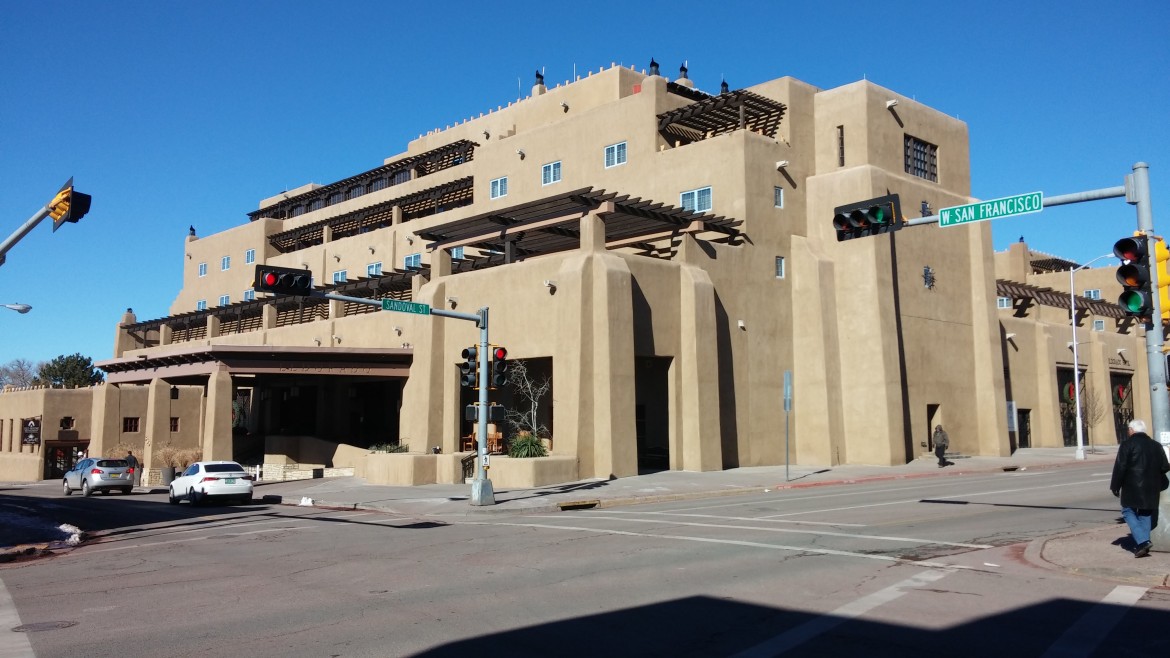 The Eldorado Hotel in Santa Fe.

Gov. Susana Martinez has both apologized and partly defended her actions following a police response to a hotel room she was in last weekend which made headlines throughout the state and country.

Though her office didn’t respond to repeated requests for comment from NM Political Report on Friday, her spokesman put out a statement to selected media outlets and Martinez appeared in person on KOB-TV Friday evening.

“I apologize to the people of New Mexico for having done that,” Martinez told KOB. “I should have never talked to central dispatch the way I did, and I own it.”

Earlier that day, the Santa Fe County Sheriff’s office released audio of a 911 call Martinez made—one herself and one through the Eldorado Hotel’s front desk—where she asked what the police complaint was about and repeatedly demanded the identity of the person who complained.

The audio reveals that Eldorado called police to escort Martinez and others in her room off hotel property after noise complaints from other guests. A front desk staffer called the police after Martinez’ room had been warned multiple times, according to the phone call.

Martinez spoke with two police dispatchers and claimed she was only eating pizza and drinking coke with her sister, who is disabled, and others in the room. Reports of bottles being thrown off the room’s balcony had happened at least six hours before police showed up, Martinez claimed.

Martinez also repeatedly told dispatchers that she was the governor and asked for the identity of the person who complained against her 11 times.

According to statement released by her office, Martinez was at the hotel having her yearly staff holiday party with more than 200 guests. Her office said she spent most of the time dancing with children and her husband.

“Once the band wrapped up for the night and the Governor and staff helped clean up the ballroom, she and [her husband] Chuck went to a staff member’s private room to eat pizza along with several other guests,” the statement reads.

Martinez was unaware of noise complaints against the room, according to the statement, and the bottles thrown from the balcony “turned out to be snowballs” thrown before Martinez was in the room. The front desk said that they had reports of bottles being thrown.

Room 465 at the Eldorado Hotel, where a loud party, including Susana Martinez , prompted a call to police.

“While the Governor was in the hotel room, she was informed a complaint had been recently made, and was also made aware of the earlier complaints,” the statement reads. “At that time, the other guests left and the Governor went downstairs to the front desk to find out more information about the complaints and assure the hotel staff that those who had caused those issues had long ago left, and there was no longer a problem.”

Martinez’ office also says she “took a call from Santa Fe Police”—a statement that SFPD denies. She spoke a dispatcher, but she called the department one time and a previous time had the hotel staff call before taking over the call.

During her call, a dispatcher refused to release information of her complainer multiple times. Martinez responded by saying, “It’s a public record, give it to me.”

“Tell me, what room number?” Martinez asked. “Are they on the fourth floor? They’re next door to our room? That area. Are they next door? I want to know who they are.”

“I’m not allowed to give you that information,” the woman at the front desk said.

“Oh, you can give it to the police but they won’t tell you—you won’t tell me? I’ll get it from the cops,” Martinez said.

In a statement released to the Santa Fe New Mexican, Martinez said she “made a mistake” by asking the hotel receptionist about the complaint.

“I should not have gotten involved in trying to resolve the situation, nor should I have spoken to the dispatcher on the phone,” Martinez said. “I was wrong to speak with them like that, and I apologize.”

Speaking to KOB, Martinez rejected the notion that she was abusing her power as governor for special treatment from police.

“No, absolutely not. I just wanted to know what was the situation, how can we resolve it, explain it to the receptionist, that it was very quiet when we were up there,” she told the TV station. “And we were simply going to eat pizza and leave.”

While her words often slur during the audio recordings, Martinez told KOB that she only had “one and a half cocktails” over a four to five hour period.

“I can tell you that my judgement was not impacted by alcohol whatsoever,” Martinez told KRQE Friday night.

Audio files and the fallout from the infamous 2015 holiday party and post-party in a hotel room that caused hotel to call the police on a loud room—one that happened to include Gov. Susana Martinez. Martinez also spoke to police and security.