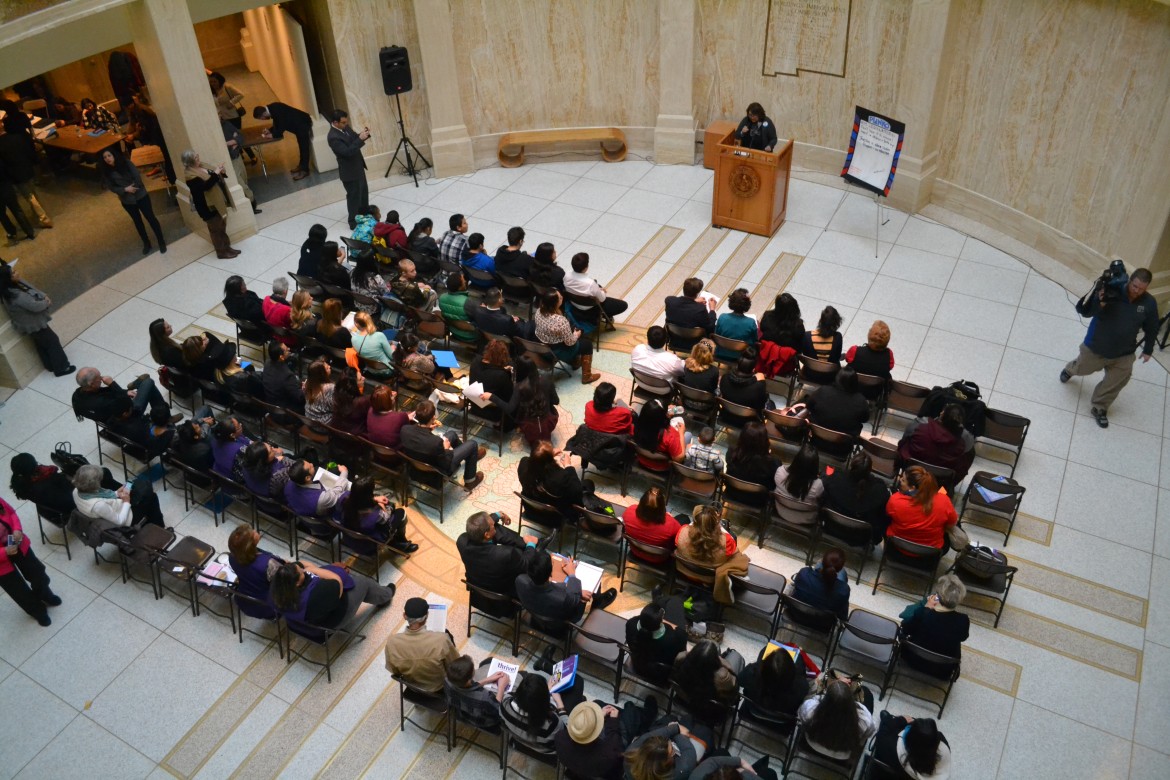 A press conference announcing the New Mexico KIDS COUNT results at the Roundhouse in Santa Fe.

A day after a report attributed New Mexico’s high rank when it came to dangerous states, in part, to poverty, a report finds that New Mexico is again last in the nation when it comes to child poverty.

A rally announcing the New Mexico KIDS COUNT results at the Roundhouse in Santa Fe.

This is one of the findings from the annual KIDS COUNT report that is put together locally by New Mexico Voices for Children.

In overall child well-being, New Mexico doesn’t fare much better, ranking 49th out of 50 states. Only Mississippi is worse.

“Child poverty is at the root of all of New Mexico’s poor outcomes for children,” KIDS COUNT director Amber Wallin, MPA, said in a statement announcing the findings. “We will not make significant gains in educational outcomes and economic well-being until we make addressing child poverty our top priority.”

The child poverty rate actually dropped slightly from 31 percent to 30 percent in New Mexico since last year’s report. But other states have seen larger gains as the country recovers from the recession. New Mexico has consistently been behind the rest of the nation in recovery from the session and reliance on oil and gas taxes combined with low oil and natural gas prices have made some concerned that New Mexico will fall even farther behind.

Still, not all is doom and gloom.

She pointed to comprehensive sex education beginning in the sixth grade as one policy that has helped, as well as “big gains in health insurance coverage for children” after the passage of the Affordable Care Act and New Mexico Gov. Susana Martinez accepting Medicaid expansion.

The timing of the report is no coincidence; the report is released annually the coincide with the start of the legislative session. Every legislator receives a copy of the report and New Mexico Voices for Children has a large presence annually at the session.

The report makes recommendations to legislators, and calls for a two-generation approach to child poverty. They want legislators to fund programs that will help parents on the educational and economic front as well as funding that will directly help children, such as pre-kindergarten programs.