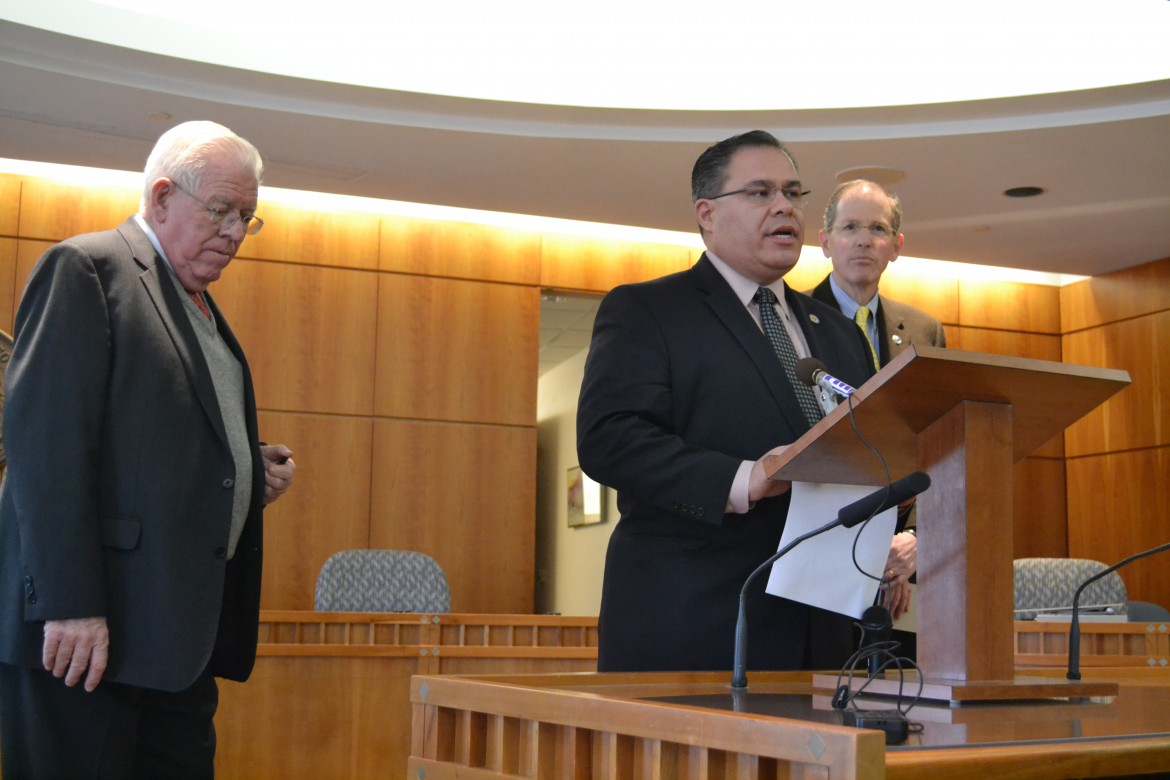 Two press conferences on Wednesday at the midpoint of the session showed deep divides between leadership in the House and Senate haven’t gone away.

A top state senator said all the House GOP tough on crime bills passed could cost between $3 million and $5 million if they become law.

But John Arthur Smith, D-Deming, added that he doesn’t yet have an empirical number and his estimates were based on talks with judges and court officials.

“We do know there is a cost,” Smith said in a Senate Democratic press conference Wednesday morning.

Smith, the chairman of the Senate Finance Committee, mentioned a DWI reform bill that passed both chambers and became law years ago that was promised not to cost any extra money.

“And they next thing I knew, we had a prison with 500 DWI people incarcerated in Springer, New Mexico,” Smith said. “So it sort of convinced me there’s always a price tag.”

Smith said he would add the new money to a “very, very thin House Bill 2,” the budget that cleared the House Appropriations and Finance Committee earlier this week.

Smith also warned of that the state’s estimated new revenue this year may continue to drop. Originally, forecasters expected $230 million in new revenue for the coming fiscal year. But sliding oil and gas prices and other factors brought the most recent estimate down to around $30 million in new money.

Smith mentioned that overall gross receipts taxes across the state were down more than 5 percent. The Senate will still build a budget off the $30 million estimate, Smith said, but a special session would have to happen if the revenue continues to slide.

Senate Majority Whip Michael Padilla, D-Albuquerque, criticized the crime bills out of the House as “grandstanding.” He also criticized House Republicans for “dragging the families” of high profile crimes into their agenda.

“It’s really unfortunate that the GOP in the House has done this,” Padilla said, “to drag these families through this round building and [have them] relive the tragedies in their lives and not have a way to pay for these reforms that are supposedly the panacea and the fixture of all these issues.”

Rep. Paul Pacheco, R-Albuquerque, said in a House Republican press conference that he was offended to hear allegations from the Senate that the House members are grandstanding.

“I find that very insensitive, unfeeling and offensive, in regards to the victims, the victims the victims families and to the citizens of New Mexico,” Pacheco said.

Pacheco said the Sanchez and other Democratic leaders are playing political games, while he is trying to protect the people of the state.

“This is not a political matter, this is about us protecting our communities and our state,” Pacheco said. “I take full responsibility in pushing these important bills forward.”

Wirth talked about how one of his bills got amended seven times before entering a conference committee and becoming law.

“You want your bill to be moving,” Wirth said. “Rep. Pacheco’s bill is moving. And again he needs to understand that there’s going to be a discussion.”

Ivey-Soto took offense to Pacheco’s rejection of any amendment to his driver’s license bill.

“For any member to say, ‘My bill is so perfect that it can never be amended’—I’m sorry that’s not how this legislature works,” Ivey-Soto said.

“Up to this point it’s been one broken commitment after the next,” Gentry said.

Gentry cited Senate committee assignments for tough on crime bills, promises made to victims families and a letter from Senate leadership stating an acceptance of a fingerprint provision in a House driver’s license bill. He said he would like to see the Senate “start to do what they say they’re going to do, so we can move New Mexico forward.”

When asked why he rejected Senate committee amendments to his HB 99, Pacheco again cited the letter from Sanchez regarding the fingerprint provision. He also accused senators of surprising him with a lengthy change to his bill with little time to review it.

“I think that’s really disingenuous,” Pacheco said. “How am I supposed to look at something like that and make an evaluation of all the possible problems that exist?”

Gentry said, ultimately he wants to see more action from the other chamber.

“We’re hopeful at some point the Senate will stop with the political games and get to work,” Gentry said.