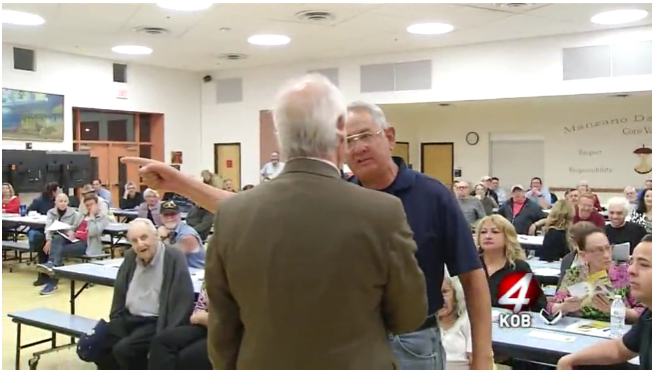 A man yelling at Albuquerque City Councilor Isaac Benton during a meeting on ART. Screenshot from KOB-TV.

Tempers boiled over at the most recent meeting to discuss a bus rapid transit system slated to travel down Central.

A man yelling at Albuquerque City Councilor Isaac Benton during a meeting on ART. Screenshot from KOB-TV.

City Councilor Isaac Benton moderated the latest meeting of the Albuquerque Rapid Transit system, or ART, and clashed with some outspoken opponents of the proposal.

Video was posted online by ABQ Free Press and as part of a news story by KOB-TV. Both are embedded below.

The videos focus on one man, in a blue polo shirt and jeans, heckling Benton and then confronting him.

At one point, Benton said he would meet those who wanted to scream at him could meet him outside, while the rest heard the presentation put together by the city.

“This is about problem solving for this project,” Benton said of the meeting.

Later in the meeting, the man in the blue polo shirt stalked to the front of the room to confront the city councilor.

The man, himself with his finger pointed at Benton’s face, yelled at Benton, “You get your finger out of my face.”

Benton continued to try to talk to the crowd, while letting the man know he would join him outside.

This wasn’t the end of the confrontation, either.

“You said let’s go outside? Let’s come on outside,” the man in the blue polo shirt yelled later in the meeting.

In other words, it was another fiasco of a meeting on the ART project. Organizers moved the meeting to a larger location after the turnout for the two previous meetings.

The interruptions began at the beginning of the meeting.

“Why don’t you wait until the time of the meeting where it is time for you to speak,” Benton said.

Then, it appears from the video, another man began yelling while Benton tried to talk over him.

Other members of the audience began yelling, some asking that Benton be allowed to continue to talk and give background on the system.

Previous meetings on the project, which is opposed by some in the area because of the disruption from construction and other reasons, have also grown heated.

NM Political Report previously reported on the attention from national entities on the proposal. Since that report, the project was put on President Barack Obama’s proposed federal budget.

The budget would need to be passed by Congress.

There is another ART meeting scheduled for tonight on Albuquerque’s Westside at the Patrick J. Baca Library.

Correction: The project was included in President Barack Obama’s proposed federal budget. We changed the story to reflect this. We regret the error.