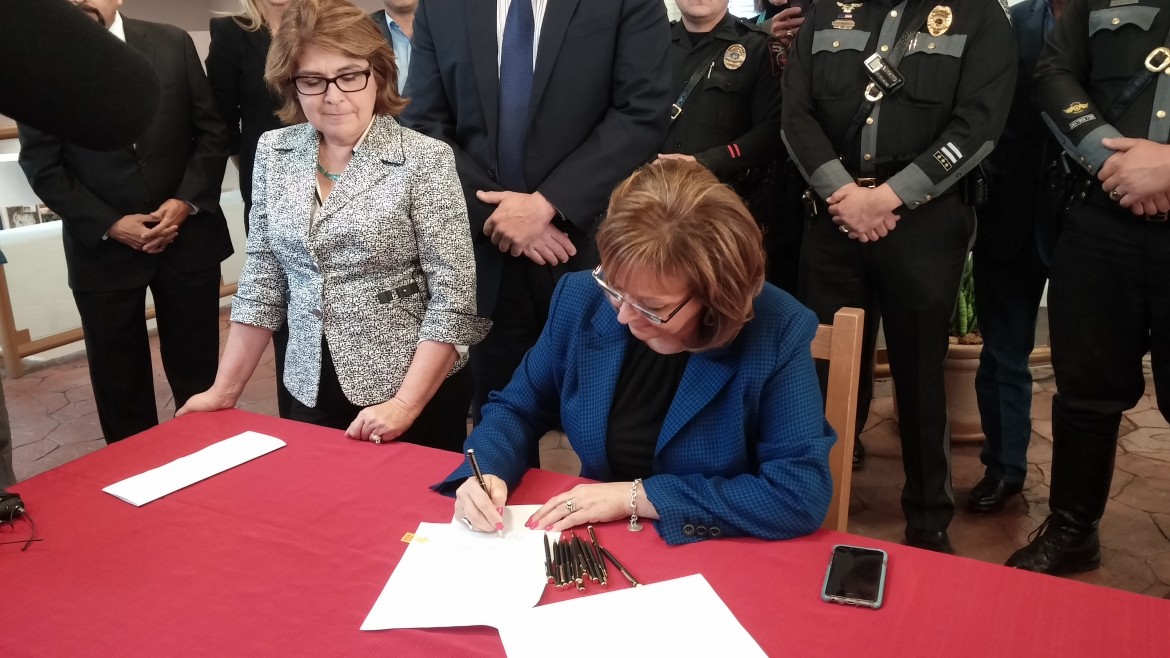 Gov. Susana Martinez signed the driver’s license bill into law Tuesday afternoon at a self-congratulatory press conference at the Albuquerque Sunport. The bill will bring the state into compliance with the federal Real ID Act.

In brief remarks that lasted only a couple of minutes, Martinez said no less than three times that the law will end New Mexico’s practice of allowing driver’s licenses for those who are in the country illegally.

At one point she outlined how that practice will actually change.

“Under this bill no illegal immigrant can get a driver’s license,” Martinez said. “They can get a driver’s permit, but only if they can prove residency, provide fingerprints and subject themselves to background checks. And those limited permits cannot be used for identification purposes.”

All immigrants who are in the country illegally and already have New Mexico driver’s licenses will get to keep their licenses.

State Rep. Paul Pacheco, R-Albuquerque, a sponsor of this year’s driver license bill, and state Taxation and Revenue Department Secretary Demesia Padilla were present for the bill signing. Both thanked Martinez for supporting them on this issue throughout the years.

“When I started off as the secretary for Tax and Rev, I thought I was going to deal with tax matters,” Padilla said. “Little did I know there was going to be this little thing called driver’s licenses and Real ID.”

The Real ID Act became federal law in 2005. Martinez appointed Padilla to the head of Tax and Rev in 2011.

Padilla later told reporters that the next step involves her office submitting a plan for Real ID compliance to the federal Department of Homeland Security.

“They have to approve our plan to move forward, and it is our hope that they will do that in the near future,” she said.

DHS already granted an extension of a waiver through October of this year.

The legislation finally moved forward this year with bipartisan support after work in the Senate by Senate Minority Leader Stuart Ingle, R-Portales, and Senate Finance Committee chairman John Arthur Smith, D-Deming. The compromise, once it received approval from Tax and Rev and the House sponsors, allowed the legislation to easily pass both chambers.

The original version passed the House with a narrow majority, with all Republicans and a few Democrats voting for it.

The Senate passed a two-tier system in 2015 on a wide bipartisan vote but it never received a vote in the House.

Martinez made repealing the law that allows immigrants not in the country legally to obtain state driver’s licenses one of her top priorities since her first term in office. During the press conference she noted how the state Legislature passed the driver’s license bill this year nearly unanimously, after five years of battle over the issue.

“Which makes me wonder, why didn’t we do this five years ago?” Martinez asked rhetorically.

In the past, her office wouldn’t agree to sign a two-tier driver’s license bill that still allowed undocumented immigrants to drive. This year, her office agreed to it.