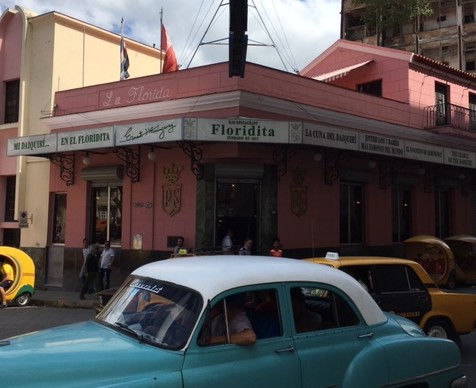 Just weeks after President Barack Obama’s historic trip to Cuba, a local lawmaker made a trip of his own for a much different reason.

State Rep. Javier Martinez, D-Albuquerque, traveled to the country earlier this month to take a look at the country’s state-run universal health care system and look to apply some of those lessons at home.

The freshman lawmaker, who by day is a community organizer and executive director for the Partnership for Community Action, says New Mexico can learn plenty from a country with a health care and education system that he contends is “the envy of most industrialized nations” in the world, including the United States.

But he also doesn’t shy away from the problems that tend to come with one-party Communist countries.

“I don’t want to be this crazy liberal politician saying, ‘Oh, Cuba’s got it figured out! I don’t know why you complain!’” he said.

NM Political Report caught up with Martinez to talk about what he learned from Cuba and whether it can be applied to New Mexico.

The interview has been condensed and edited for clarity.

NMPR: What brought you to Cuba recently?

Martinez: This is actually a follow-up trip. There’s a delegation from New Mexico, from the South Valley, three of us who went on [the trip.] We were first there in 2012 through an organization called MEDICC that works to provide exchange opportunities for professionals in the US—usually medical and health professionals in the US—with those in Cuba. In the last several years MEDICC has expanded that reach to include more people who are doing grassroots work.

NMPR: What were some of the organizations in Cuba that MEDICC connected your delegation with?

Martinez: The bulk of the trip was organized by the Cuban Ministry of Public Health. In the U.S. we look at public health as a discipline within a number of disciplines. Over there, public health is the backbone of their entire social-political system. We visited with them, but we also visited with specific community-based health providers. We visited with their equivalent of neighborhood associations. And we also visited, interestingly enough, with people in the very recent nonprofit/for-profit sector. In the last few years, the Cuban government has relaxed some of its internal rules around private enterprise. One of the people with visited with is a barber who President Obama highlighted in his speech to the Cuban people last month. This barber runs a privately-owned barbershop in downtown Havana, but he uses the profits to mentor young people who are either disabled or young people who are troubled in some way and have to engage with the criminal justice system.

NMPR: How does this trip benefit your constituents?

Martinez: As a lawmaker, this was really an opportunity to continue to bridge the cultural and political gap between our countries. I see a lot of similarities between the conditions of the Cuban people and the conditions of the people here in New Mexico. The poverty is very much in your face. You see it with the difference that over there, you are guaranteed a level of health care and education that would be the envy of most industrialized nations. And that is much more evident here in New Mexico where our children don’t necessarily have access to those services.

I’m a big proponent of quality early education for every child, and we can’t even get past the question of how to fund it. Over there it’s not a matter of how—it’s really happening. To me that mindset is something that we really need to look at as lawmakers. We fight over which corporation will get the next big tax break, but we seldom take the time to figure out how to provide these basic necessities for everybody that needs them in our state.

It’s really difficult to pinpoint specific programs that could be replicated from there to here because the culture is so different. It’s hard to understand how their system works. It’s really about the collective, in many cases for good [and] in many cases not for good. In this country we rally around our individual rights, we rally around our property rights. Over there you have to suspend that belief, and it’s really hard.

NMPR: You also went to Miami on this trip?

Martinez: I spent some time in Little Havana just to get the other point of view. There’s a fascinating story: Dr. Bill Wagner and I came across a monument in a little park dedicated to those who fought in the Bay of Pigs invasion, which of course in Cuba is [looked at with] a completely different perspective. And outside of one of those homes by the park was an older gentleman in his 80s. He had been a big landowner in Cuba when the revolution took over and he actually lived under the Cuban regime for a couple of years, right up until all his stuff was taken away. He left penniless, ended up in Miami and has been there ever since. I asked him, “With this new approach by President Obama and President [Raul] Castro, are you hopeful that you can go back?” He said, “No I’m never going back. It’s never going to change.” And it was heartbreaking. He has siblings who he hasn’t seen in close to 60 years. He has nephews and nieces and grand-nephews and nieces who he will never meet. So it really speaks to the issue of how history has different interpretations.

NMPR: Is there a way to replicate Cuba’s accomplishments without jeopardizing values like individual rights and private property rights?

Martinez: I think there is, by electing lawmakers and by working to change the norms of society, which is the work that many of us do in our day jobs in the South Valley—building communities and building relationships between one another. When you do that, you realize that sometimes your individual rights, if they start to harm another person, then that’s a problem. The Second Amendment issue is a clear example. Once that right infringes on the right of a child to peacefully get an education at their neighborhood school, that is a problem. I hope we get to a place where, as legislators, we really put the benefit and well-being of the collective above and beyond the benefit of me politically or of the next big corporation that is hoping to relocate to the state. It’s really a consciousness-building of love and appreciation for our neighbor that will help us create a different way.

NMPR: What was accessing media or logging on the internet like for you?

Martinez: Access to the internet in 2012 was very hard to come by, even for tourists. Now it was actually pretty easy. They have these wi-fi hotspots throughout the city. You could tell because you would see a bunch of Cubans on their iPads or on their phones huddled around in a park or outside a hotel or at a government building or outside a school. It’s still not at the level where every household has access to it and I’m not sure that it’s so much an issue of censorship as much as it’s an issue of infrastructure. In terms of the media, it was really hard to tell. They have their official newspaper, which is state-run. I don’t know that they have independent stuff really, although there are bloggers, and a lot of those blogs are actually in dissent to the Cuban system.

NMPR: But you saw people with mobile devices?

Martinez: Everywhere! It was no different than walking down the street here when you have to be on the lookout not to run into people zoned out on their phones. It’s interesting when you have your cab driver driving an old car pieced together with random parts but looking at directions on his iPhone.

NMPR: I saw one of your Facebook posts about all the people in Havana exercising in the morning.

Martinez: Everywhere you go in the mornings or in the evenings, any park or any public space is just full of people. Old people, young people, kids playing sports or doing some sort of exercise. It’s sort of ingrained in their culture. After 60 years, it’s something you do. Having said that, they have a huge issue with tobacco. Obviously as a tobacco-producing and rum-producing country, those are two areas where even the public health experts will tell you are hard to break because they’re a cultural norm. And it is as normal as exercising.

NMPR: One of your Facebook posts described how you don’t have a perspective for or against the Cuban Revolution.

Martinez: It’s a very complicated thing to actually have an opinion about. I’m not Cuban, I don’t have any experience benefiting from the Revolution in terms of health care and education. I also didn’t lose 500 acres of land and 500 head of cattle to the Revolution. I try to be really respectful. When you haven’t seen your mother for 30 years because you felt that things were not working out and you left, that’s an experience I have no right to dispute.

I take everything with a grain of salt. Everything that the [Ministry] of Public Health told me, OK, cool. Now I’m going to talk to some other people. Every evening we would explore on our own. The first time I went, I sort of imagined cops everywhere and people talking cautiously to you. There’s nothing further from the truth. Havana is a big metropolis, no different from Mexico City or Santo Domingo in the Dominican Republic. People going to and from work, school, the theater. As long as they’re not busy running from one place to the other, they’ll talk to you and they’ll tell you. And overwhelmingly, people were happy with their system.

NMPR: If someone views your trip as politically pro-Cuban regime, what is your response?

Martinez: I would think that’s a ridiculous claim. This is really about building an understanding between our countries and local communities. Most people I talked to, they knew where Albuquerque was and they would know things about Albuquerque. And that’s because they are very knowledgable folks who are educated. Anybody from the public health director all the way down to the cab driver. I was able to share with them about a lot of the work we do. Whether Castro is good or bad, I will leave that for other people to decide. For me it was really about what people in similar conditions are doing on the ground over there and what we can learn from them. And we share with them what we do and what they can potentially learn from us. We have a long history of cooperatives and family-owned businesses. They were really impressed by that.