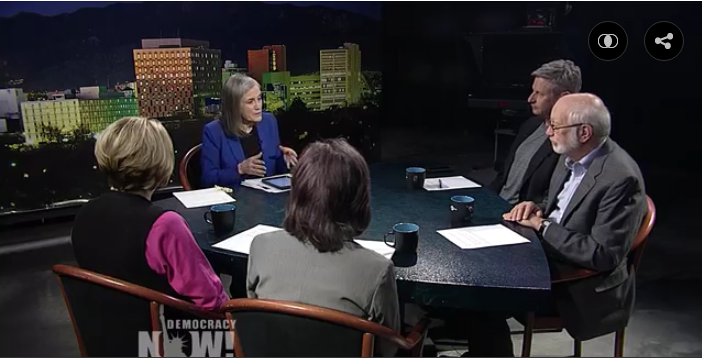 Four New Mexico politicos gathered to discuss the state of the presidential race and more on Democracy Now! Wednesday.

The discussion comes a little more than a month before New Mexicans go to the polls for the primary.

Ortiz y Pino said that Sanders needs to stay in the race—even if there is no path to securing the nomination.

“One of the things that would bother me a great deal is if the calls for Bernie Sanders to stop running now because he doesn’t have an arithmetic chance of winning, that he would heed those,” Ortiz y Pino said. “I don’t think he will. He knows that the important thing is to keep the pressure on and to keep raising these issues.”

Denish also said she did not want Sanders to drop out, noting she supported Clinton staying in the 2008 race.

“I want the debate to continue,” Denish said.

Denish also said Clinton and Sanders have influenced each other on positions.

She said the American people “want people who can say how they’re going to actually get the job done, and know that they can go into that office and be ready to face the challenges of the world.”

Denish was a superdelegate in 2008, and endorsed Hillary Clinton. Clinton lost to Barack Obama in that primary, though Clinton narrowly won the New Mexico primary.

Wilson Beffort said that she “most probably” will vote for Donald Trump.

The roundtable came as Democracy Now! is on tour. The show’s host, Amy Goodman, made appearances in New Mexico this week.