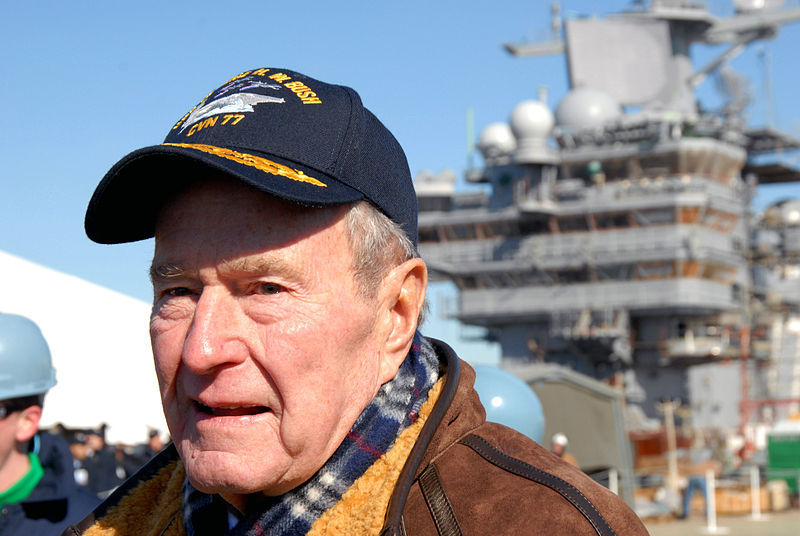 For the first time since his own presidency, George H.W. Bush is planning to stay silent in the race for the Oval Office — and the younger former president Bush plans to stay silent as well.

Bush 41, who enthusiastically endorsed every Republican nominee for the last five election cycles, will stay out of the campaign process this time. He does not have plans to endorse presumptive GOP nominee Donald Trump, spokesman Jim McGrath told The Texas Tribune.

“At age 91, President Bush is retired from politics,” McGrath wrote in an email Wednesday. “He came out of retirement to do a few things for Jeb, but those were the exceptions that proved the rule.” His son Jeb Bush dropped out of the GOP presidential race in February.

Bush 43, meanwhile, “does not plan to participate in or comment on the presidential campaign,” according to his personal aide, Freddy Ford.

On Tuesday evening, Trump secured his place as the all-but-certain Republican nominee with a decisive win in the Indiana primary. Hours later, U.S. Sen. Ted Cruz of Texas, who had hoped to force a contested Republican convention, formally dropped out of the race.

“What Ted did is a great thing to do, because we want to bring unity to the Republican party,” Trump said in his victory speech Tuesday night.

“We have to bring unity — this is so much easier if we have it,” Trump added.

The unity Trump hopes to achieve might be difficult, given the positions other prominent Republicans have taken this election cycle. This week, Cruz called Trump a “serial philanderer” and “pathological liar” for whom “morality doesn’t exist.” In February, U.S. Sen. Marco Rubio of Florida, then a GOP candidate, called Trump a “con artist,” while then-candidate Jeb Bush suggested the Republican frontrunner might need therapy.

Although George H.W. Bush and George W. Bush have not critiqued Trump in so many words, they have made some veiled criticisms. At a campaign event for his brother Jeb Bush in February, Bush 43 noted that in his experience, “the strongest person in the room usually isn’t the loudest one in the room.”

And Bush 41’s silence tells its own story.

In 1996, Bush stood by Bob Dole, a longtime political rival, to offer Dole a hearty endorsement in his campaign against President Bill Clinton.

“I’ll do anything Senator Dole wants me to do — I’ll campaign for him,” Bush said. “My heart lies at this level, the Dole level.”

“As someone who helped lead our great party at the RNC and later as president, I believe now is the right time for me to help John in his effort to start building the broad-based coalition it’ll take for our values to carry the White House this fall,” Bush 41 told reporters in February 2008.

Meanwhile, Bush 43 also volunteered his services, saying of McCain, “If he wants my pretty face standing by his side at one of these rallies, I’ll be glad to show up.”

And in 2012, at age 87, the elder Bush came out swinging once again for Mitt Romney in a glowing interview on CNN.

“Barbara and I are very proud to fully and enthusiastically endorse and support our old friend Mitt Romney,” Bush 41 said. “He’s a good man, he’ll make a great president, and we just wish him well.”

Representatives from the Trump campaign did not respond to requests for comment.

This article originally appeared in The Texas Tribune at http://www.texastribune.org/2016/05/04/bush-41-43-have-no-plans-endorse-trump/.