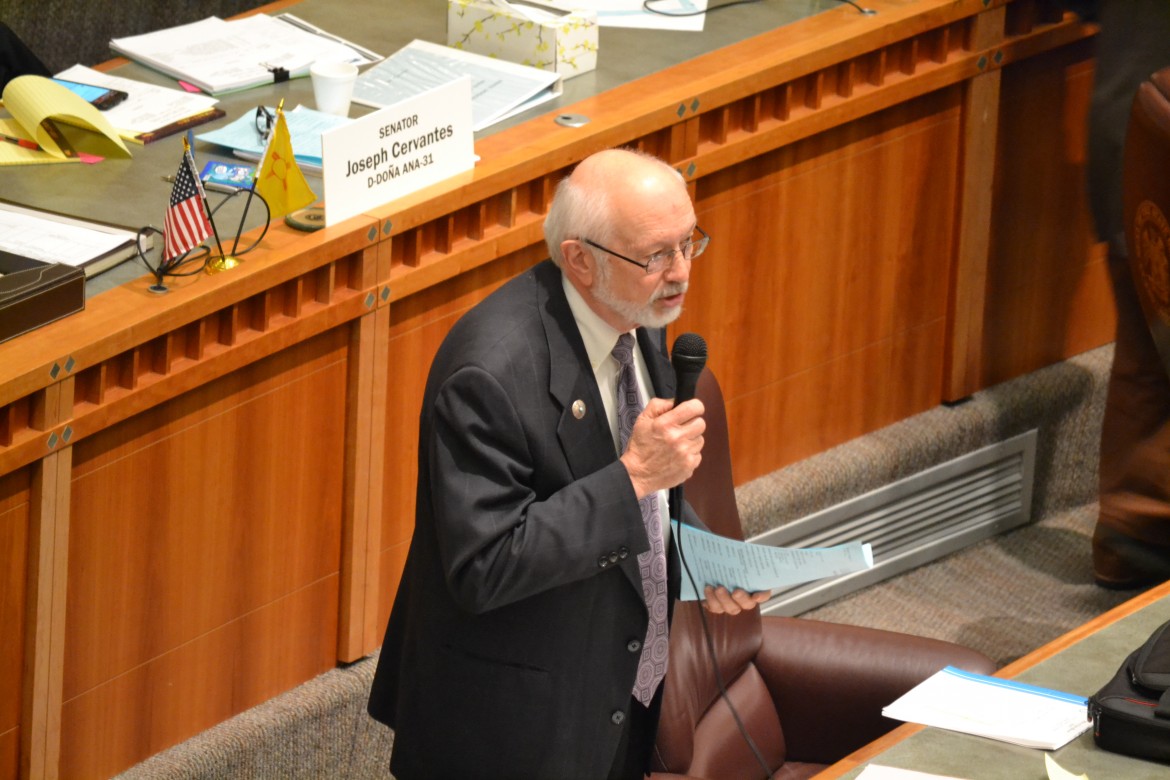 Just days after a state senator called for the resignation of New Mexico Human Services Department Secretary Brent Earnest, the two kept things relatively cordial with one another in their first public meeting since then.

Sen. Jerry Ortiz y Pino, D-Albuquerque, chair of the interim Legislative Health and Human Services, gave the floor to Earnest during the Monday morning committee hearing by the committee to explain how he is addressing allegations in several court testimonies of a department policy to falsify and delay emergency food benefit applications.

“I don’t believe that anything has been said about what you’re doing about that,” Ortiz y Pino told Earnest.

“If Secretary Earnest did not know this was happening, he failed to lead the agency,” his statement said. “If he did know, but did nothing, then this is may be a very serious legal matter.”

During the hearing Monday, Earnest explained that since the allegations first surfaced in April, his department launched an internal investigation and issued a written directive to employees telling them to follow federal guidelines.

The allegations come as part of a legal motion against the state by the Center on Law and Poverty, which asked a federal court to appoint an independent monitor to direct SNAP and Medicaid application processing at HSD.

“What we have available is our inspector general who does operate independent of our division,” Earnest said, referring to the Income Support Division, which manages SNAP and Medicaid applications. “So he reports to me as the secretary.”

Ortiz y Pino responded that he had heard concern that employees “may be reluctant to be fully forthcoming with an internal investigation.”

So far, the State Auditor’s Office is the only outside entity that announced an investigation into the SNAP fraud allegations.

The topic of retaliation against employees who first made the allegations also came up. In court, one woman said her superiors deleted emails showing evidence of her allegations after first testifying while another said she’d was being monitored more since first coming forward.

“I know they’ve all expressed concerns,” Earnest said. “But we take that also very seriously and we also have discussed with supervisors that we have an anti-retaliation policy, and we remind them of that.”

Ortiz y Pino also asked Earnest about the “browbeating” and aggressive questioning in court earlier this month from attorney Paul Kennedy, who is representing HSD.

During that hearing, Kennedy questioned the morals of Alexandra Hancock, a Silver City-based application processor for the department who testified that her superiors reprimanded her for processing a late application the correct way instead of adding fake assets to delay the benefits.

After Hancock described herself to the court as a “social justice” advocate for one of her reasons for coming forward, Kennedy questioned her on why an advocate would come forward with the allegations now and not two years earlier when Hancock said she first learned of the alleged fake asset practice.

Center on Law and Poverty attorney Sovereign Hager objected to the question as “harassing the witness,” which federal Magistrate Judge Carmen Garza sustained.

“I just wonder if it’s wise to go along with an approach that basically says, ‘If we’re being accused of something we’re going to defend ourselves, even if it later turns out to be true,’” Ortiz y Pino told Earnest. “‘And we’re going to do it in a way that puts the workers that brought this to light in a defensive posture.’”

Earnest responded by saying that “having sat in the witness stand, browbeating is apparently the tactic that attorneys like to use in that setting.”

“And I’m not saying that happened,” Earnest continued. “It’s an uncomfortable place to be. But regardless, it’s important that our employees know the can speak freely about this.”

Earnest added that his department would give employees a safe place to speak up and said their union representation was available. The American Federation of State, County and Municipal Employees Council 18, which represents HSD employees, helped the employees to come forward with their allegations in federal court.

They’re referring to this statement that HSD spokesman Kyler Nerison gave to select media outlets (not including NM Political Report): “This is a blatant political stunt from an out-of-touch extremist who is on record calling child abuse ‘acts of passion.’ He has no credibility whatsoever.”

The “acts of passion” comment came in 2013 when Ortiz y Pino called child abuse crimes, “acts of passion, of momentary insanity, of craziness,” in response to a bill seeking increased penalties on child abusers, according to KOAT-TV.

“It just seems that by personalizing things and calling out the chairman when he’s trying to do his duty is not the best policy here,” McSoley told Earnest. “It was people from your own department that were making these allegations. It was not anybody else.”

Morales added that the statement was “extremely aggressive toward our chairman.”

“You just stated a while ago that any employee shouldn’t feel intimidated by fear,” Morales said. “What kind of assurance and comfort can we give to the employees who want to give that truth out if that’s the kind of tone that’s being sent?”

No lawmaker questioned Earnest about three of his officials invoking their Fifth Amendment rights in court this month and refusing to answer nearly 100 questions about the allegations and more.

The results of HSD’s internal investigation are due to federal court at the end of June.