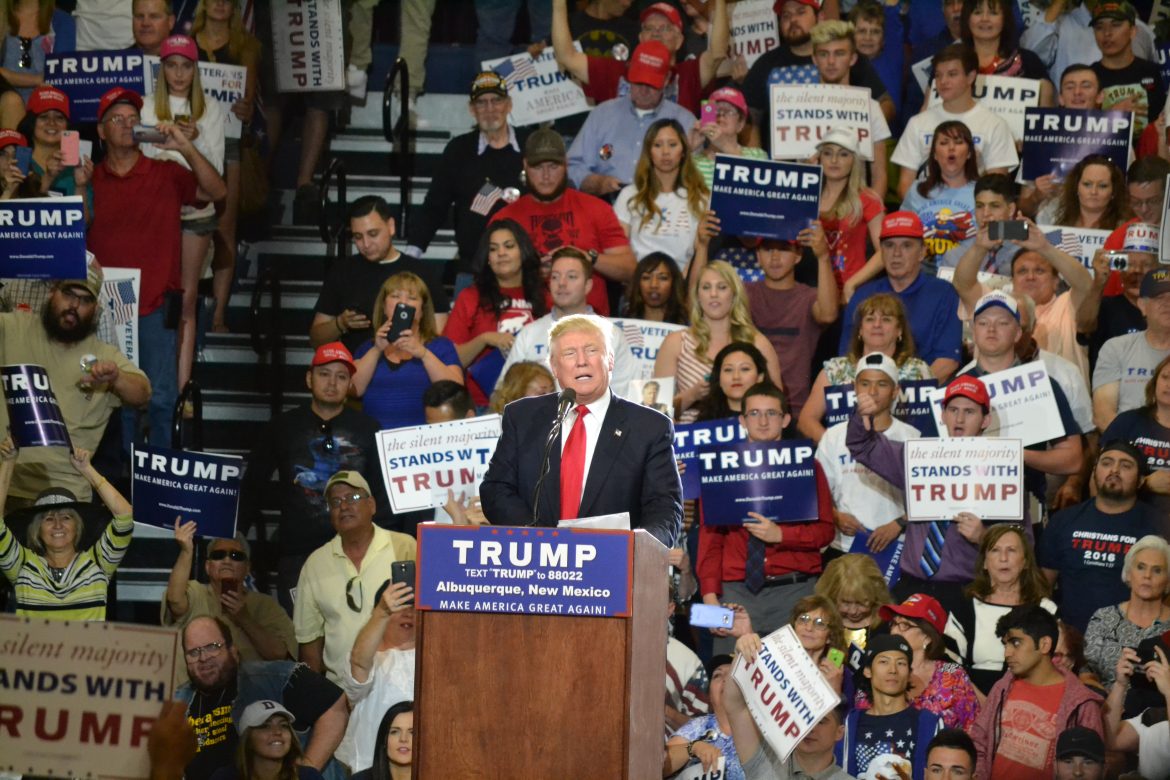 It seems that Gov. Susana Martinez may be the new face of the conservative anti-Donald Trump movement.

Establishment Republicans and even the head of one of the Super PACs backing Trump either defended Martinez or criticized the Republican presumptive nominee.

Tuesday night during an Albuquerque rally, Trump slammed Susana Martinez. He cited facts that unemployment went up (though he said it doubled), that food stamp usage skyrocketed and that she allowed Syrian refugees to relocate to the stage “in large numbers” (when in reality just four Syrians have been relocated in the state). He also cited numbers from 2000, ten years before Martinez became governor.

Martinez fired back a rebuttal to some news outlets (though not to NM Political Report).

“Governor Martinez doesn’t care about what Donald Trump says about her – she cares about what he says he will do to help New Mexicans,” a spokesman, Michael Lornegan, said in a statement. “She didn’t hear anything about that today.”

Martinez had previously slammed Trump for some of his rhetoric, especially that aimed at immigrants. Martinez also has sidestepped all questions about supporting Trump and did not attend his Albuquerque rally, though she was in the state earlier in the day.

She has some big name Republican backers on her side.

Scott Walker, in his capacity as Republican Governors Association Vice Chair, issued a statement that didn’t mention Trump by name but praised Martinez.

“From delivering crucial tax reform, standing up to Washington by suing the EPA for federal overreach, turning a deficit into a surplus and making New Mexico the leader in jobs for export growth while increasing the state’s business friendliness, Governor Susana Martinez has effectively driven conservative reforms in a blue state won twice by President Obama, while winning re-election by the largest margin by a Republican in state history,” Walker said.

Martinez is the chair of the organization.
Others tweeted their support.

Politicians talk. Governors lead. @Gov_Martinez is a leader and the future of our party. pic.twitter.com/qpq9ycOJib

The truth is @ Gov_Martinez is one of the hardest working and most effective Governors in America. https://t.co/QcADopQCYe

.@Gov_Martinez is an outstanding governor who has brought conservative reform to a blue state. (1/2)

She’s exactly who our party & nominee should be lifting up and supporting, not tearing down. (2/2)

All four ran for president this year but lost to Trump in the Republican primary. Walker and Rubio have said they will support Trump.

Danny Diaz, a political operative who worked on Martinez’s gubernatorial campaigns and was Jeb Bush’s campaign manager, also tweeted his support for Martinez.

Speaker of the House Paul Ryan, who also has declined to endorse Trump, also praised Martinez, if tepidly.

“Look, I’ll just leave it at this: Susana Martinez is a great governor. She turned deficits into surpluses,” Ryan said according to the Washington Post. “She cut taxes. She’s a friend of mine, and I think she’s a good governor. I will leave it at that.”

One of the more interesting rebukes came from Ed Rollins. Rollins is the co-chairman of a Super PAC that backs Donald Trump, but he didn’t agree with Trump’s assessment of Martinez.

“Obviously, I’d have done it differently,” Rollins said according to Buzzfeed Politics. “New Mexico is going to be a key state, it’s a swing state. I think the governor is one of our stars.”

As the Washington Post mentioned, Martinez was a trendy choice by some to be Trump’s running mate. She has repeatedly denied any interest in being anyone’s running mate.

One group who agreed with some of Trump’s statement? The Democratic Party of New Mexico.

“It’s true. Governor Martinez is not doing her job. Her job is to make sure New Mexico prospers, and all we’ve seen from her administration are attacks on our immigrant communities, a dismal jobs record, and a slew of embarrassing headlines—not unlike Donald Trump if you ask me,” the Democratic Party of New Mexico said. “Under Governor Martinez, New Mexico ranks poorly in child well-being, unemployment, and high school graduation rates.”

The Republican Party, meanwhile, did not mention Trump’s comments in a statement that blasted protesters.