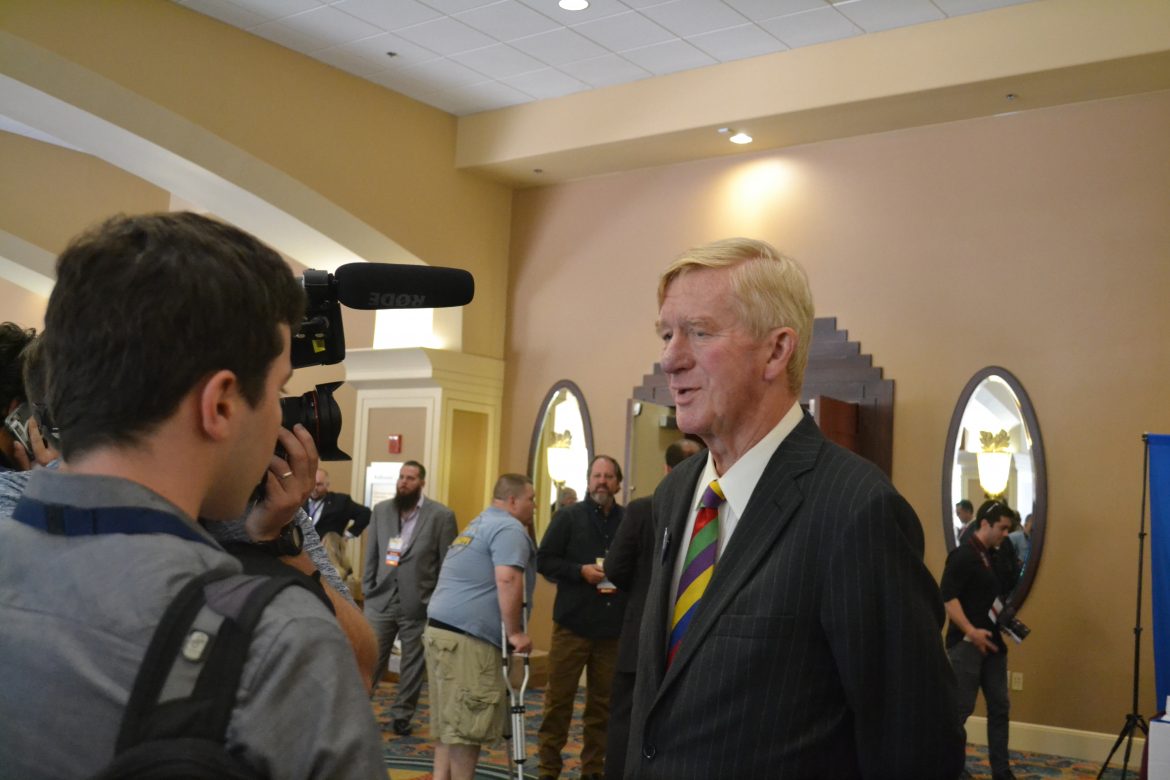 While Johnson received a warm welcome, many questioned why Johnson picked Weld as his running mate in the first place.

Johnson’s campaign headquarters, located inside the hotel’s convention center, served as the place for the revolving door of delegates to voice concerns and ask the two-term governor New Mexico governor questions.

Steven Nielsen, a delegate from Port Orchard, Washington, showed up and asked Johnson to make the case for Weld.

“Gary, I need confidence,” Nielsen said. “I don’t have confidence in the Johnson-Weld ticket, so I need you to sell me, right now. I came up here to talk to you.”

Johnson told Nielsen that he made the pick based on his view of Weld.

“Bill Weld for me, has been a role model for me, my entire life,” Johnson said. “I wanted to grow up to be Bill Weld.”

Nielsen didn’t seem to gain any confidence in the Johnson’s choice for VP.

“I came into this convention as a Johnson-Weld delegate and then Thursday happened,” Nielsen said. “Now I’m undecided-undecided.”

In the Libertarian party, vice-president and president nominations are separate. In theory, Johnson could win the nomination while Weld loses, leaving Johnson with someone besides his hand-picked running mate.

Running with someone else besides Weld still doesn’t seem like an option to Johnson though.

“If it’s it not Bill Weld, this whole thing gets handicapped by 50 percent,” Johnson said.

It’s something Johnson repeatedly told reporters on Saturday. Flanked by national media outlets and cameras, Johnson said he wouldn’t drop out if someone else wins the vice president nomination, but that he could not win without him.

One seemingly popular vice president candidate, Larry Sharpe from New York City, told an audience early in the convention that he joined the Libertarian Party after being inspired by Johnson himself.

Sharpe told NM Political Report that he still likes Johnson but that the Weld pick was a misstep.

“I still love him, I think it was an error, I want to fix it,” Sharpe said.

Sharpe himself is not tied to a presidential candidate, but said he would support any candidate that gets nominated.

“If the delegates think I should be the vice president, I’m happy, overwhelmingly, to support him,” Sharpe said.

At issue with Weld with many delegates is his previous stint as a Republican and his view on gun rights. Weld told NM Political Report he fully supports the second amendment, but it was his stance as governor that earned him the label as soft on gun rights in some Libertarian circles.

As governor of Massachusetts, Weld said, he made it known he was a hunter and owned guns.

“In Massachusetts that stamps you as a very strong second amendment advocate,” Weld said, “Not here.”

Nielsen also took issue with Weld’s friendship with John Kasich, who said he would block ballot access to the Libertarian Party in Ohio. Earlier in the convention, Weld said he would call Kasich and straighten the matter out, prompting one audience member to offer her phone during a debate.

Weld said he spoke with the Ohio delegation and would reach out to Kasich but not until after the party makes a nomination.

“I figured it would be more orderly to wait and see if I have the nomination,” Weld said.

The Libertarian National Convention continues through the weekend and nominees are expected to be picked by Sunday.