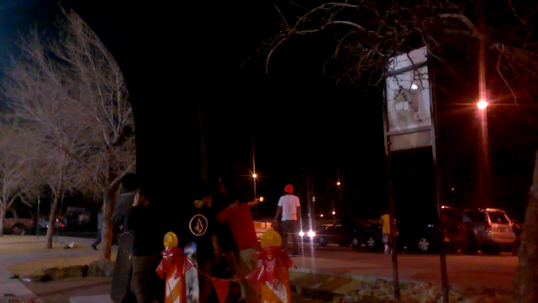 I’ve heard the question so many times now: Why is Greg Buchanan still walking Albuquerque’s streets? It makes no sense.

And, at first glance, it doesn’t.

Buchanan is the 24-year-old who shot 17-year-old Jaquise Lewis in the back at Los Altos Skate Park in March 2015 during a brawl that started over a skateboard.

This piece first appeared on the ABQ Free Press website.

Buchanan claimed self-defense and has yet to be charged with anything regarding Lewis’ death. He’s the guy who, two months before killing Lewis, was arrested and charged with drug trafficking for carrying nine bags of cocaine.

He’s the guy who, just three and a half weeks after shooting Lewis, “accidentally” fired a gun through his kitchen floor and into his neighbor’s apartment. And, he’s also the guy who started a fight in a 7-Eleven store on May 16 that caused the guy he beat up to pull a gun and fire 17 rounds at him as he fled down a city street.

In other words, Buchanan appears to be a walking time bomb.

And while at first it makes no sense that Buchanan hasn’t been charged with anything regarding Lewis’ death, the “accidental” gun discharge and his most recent public fight, in another way it does.

It makes sense if Buchanan is an Albuquerque Police Department informant and is being protected by the cops – and maybe by cops in the Foothills Area Command. It’s one of the only things that can explain what hasn’t happened to Buchanan thus far.

Think about some of these things. On the night of Lewis’ shooting, Buchanan turned himself in to an APD officer in the park. While sitting in the back of the officer’s squad car, Buchanan asked the cop if a certain officer was on duty that night. Why would he ask that? Maybe because the cop was his handler and would run interference for him?

Those felony drug trafficking charges were pending against Buchanan when he shot Lewis last year. Would not Buchanan’s shooting and killing someone, even in self-defense, have been a violation of his conditions of release? It’s up to the cops to notify the Bernalillo County District Attorney’s Office if people violate their conditions of release. Did that happen? If not, why not?

District Attorney Kari Brandenburg’s office dropped the drug charges against Buchanan last year but later refiled them. Brandenburg’s office scheduled at least two, and possibly three, preliminary hearings to determine if there was probable cause to send Buchanan to trial. The hearings never occurred because – surprise – the cops assigned to the case didn’t show up for court. Was it a coincidence – or was it an attempt to protect Buchanan?

The cops showed up at Buchanan’s apartment when he “accidentally” fired his gun through his kitchen floor and into his neighbor’s apartment. They could have charged Buchanan with negligent use of a firearm. But they didn’t. And, the cops didn’t check the gun to see if just maybe it was the same one that killed Lewis. Why not?

And, getting back to Lewis’ death, Buchanan told police that he had thrown out or destroyed the gun he used that night. Isn’t that tampering with evidence?

Police interviewed Buchanan three times. He initially told them that he hadn’t brought a gun to the skate park the day of the shooting and that he hadn’t shot Lewis. But after being confronted with the video evidence captured on a bystander’s cell phone, he confessed and said it was in self-defense. The cops, it seems, didn’t mind that Buchanan had lied to them.

And during those interviews, some of the cops were pretty chummy with Buchanan. It seemed as if they were chatting with a pal, not someone facing murder charges.

And then there’s the May 16 deal where Buchanan walked into the 7-Eleven at 13601 Copper Ave. NE and started a fight with 36-year-old Miguel Ortega. Ortega, who was armed, whipped out his gun and wound up blasting away at Buchanan as he ran away – 17 shots in all. Apparently having a gun doesn’t mean you actually know how to use it.

Ortega was charged with aggravated assault and carrying a firearm into a liquor establishment. And Buchanan, who started the fight, wasn’t charged at all. Why not?

So, the questions for Chief Gorden Eden and Mayor Richard Berry are simple. Is Buchanan an APD informant? Why has APD been protecting him? Has APD been allowing him to run a drug operation at Los Altos Park?

Remember, guys, Buchanan is a time bomb. If more blood is spilled because of him, it’s on your hands. Time to come clean.

Dennis Domrzalski is an associate editor at ABQ Free Press. Reach him at dennis@freeabq.com.