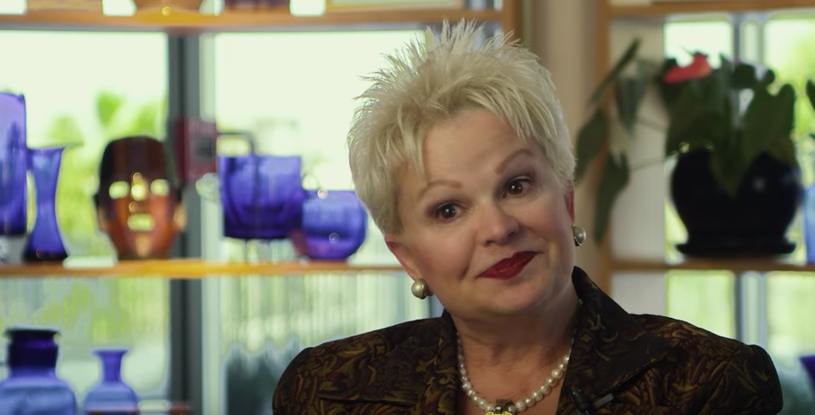 Secretary of State Candidate Nora Espinoza recently appeared in two promotional videos for a group closely associated with the Church of Scientology that is critical of prescription drug companies. Months later, Espinoza received a large campaign contribution from a pharmaceutical company that clashed with the controversial religious group in the past.

Screenshot from a Scientology promotional video

In the video, Espinoza discussed how CCHR helped her pass HB 53, which Gov. Susana Martinez signed into law.

“We drafted it, we worked together with it, to make sure that it was an excellent legislation,” Espinoza said. “We passed it through the House, through the Senate, and today, it’s now passed and become law.”

Espinoza went on to say that CCHR provided her with information showing ill effects of children taking psychotropic drugs.

“I realized that children that have a lot of energy doesn’t mean that something is wrong with them,” she said.

The Church of Scientology has a long history of denouncing psychiatry and prescription drugs.

Psychotropic medications are substances that alter the brain’s chemicals that determine mood or behavior, according to an informational brochure from the National Institute for Mental Health.

In the video, Espinoza criticized doctors who over-prescribe medication to children.

“The psychiatrists have embraced the easy way out in giving [children] medication,” she said.

In response to an inquiry from NM Political Report, Espinoza sent an email separating herself from the Church Scientology.

“I am not associated with Scientology,” Espinoza wrote.

While not associated with Scientology, Espinoza still praised the organization’s efforts to raise awareness about medicating children.

Espinoza’s HB 53 proved to be popular. Only one lawmaker voted against the measure in either the House or Senate.

In a separate email to NM Political Report, Espinoza defended her actions by saying the legislation was simply good policy.

“As a legislator I sponsored some legislation regarding drug usage and methamphetamines which I believed to be in the public interest and to protect children in particular,” Espinoza said.

The Roswell lawmaker also appeared in a second video praising CCHR, in which she said she  expressed concern over the government telling parents how to raise their children by forcing them to take drugs that affect behavior and moods.

“For government to come in and to dictate and to take those rights away from me,” Espinoza said in the video. “How dare they?”

In the second video, uploaded to YouTube in March, Espinoza discussed how hard it can be for parents to constantly worry about their children.

“Sometimes this battle, in protecting our children, we become weary at times, but then we come across people like you,” Espinoza said, referring to CCHR. “That is an injection. CCHR is an injection, that you don’t feel alone.”

She went on to praise CCHR a number of times for their efforts in denouncing psychotropic drugs administered to children.

The end of the video features text that reads: THE LAW ENACTED BY REPRESENTATIVE NORA ESPINOSA (sic) IS THE STRONGEST LAW AGAINST CHILD DRUGGING EVER ENACTED IN THE UNITED STATES.

The PR video resembles campaigns throughout the country put forward by CCHR which echo positions held by the Church of Scientology. CCHR advocates, through its website, for a number of policy changes related to psychiatric drugs, but Espinoza seems to be the only lawmaker to appear in a video for the self-proclaimed watchdog group on the issue of forcing children to take certain medication.

A similar measure was introduced in Kansas by Republican state Senator Forrest Knox. Knox told NM Political Report that his measure passed as part of another piece of legislation, but that he did not work with CCHR or the Church of Scientology on it. Knox added that if either organization approached him on the matter he may have been “less inclined” to carry the bill.

In her email to NM Political Report, Espinoza said her work as a lawmaker is not pertinent to her candidacy for Secretary of State.

“I have retired from the legislature and the work on a wide variety of public policy issues is behind me, as none of the work I did, with the exception of bills involving Voter ID or campaign finance reform, has any bearing on the duties or scope of work of the secretary of state,” Espinoza wrote.

Espinoza’s legislative term does not end until the end of the year.

In her email to NM Political Report, Espinoza stressed her campaign for Secretary of State and the issues that come with it.

“A secretary of state is not a public health officer, nor does she debate or vote on public policy issues of these types.”

In the most recent campaign finance reports, Espinoza’s second-largest campaign contribution came from a political action committee associated with Indiana-based prescription drug company Eli Lilly. Lilly, which is behind drugs such as anti-depression drugs as Prozac and Cymbalta, has had a long and contentious relationship with the Church of Scientology and in turn, CCHR.

In 1991, TIME published an article critical of Scientology and its founder. In response, the Church of Scientology took out a number of ads, including a five page ad titled ‘The Story That TIME Couldn’t Tell’ accusing the magazine of attacking the church on behalf of Eli Lilly.

NM Political Report called Espinoza to ask her about a $5,000 donation from Eli Lilly and was told she was not available and to instead email any questions.

In an email, Espinoza said she cannot speak for why anyone chooses to donate to her campaign.

NM Political Report was unable to reach an Eli Lilly representative, but the company’s website says the company supports lawmakers who have a shared vision with the company.

“Lilly supports candidates of any party who support public policies that contribute to pharmaceutical innovation and health needs of patients,” the company’s website reads.

Espinoza also took aim at the large sums of money so far spent by her Democratic Party opponent.

In a press release on Wednesday, Espinoza’s campaign criticized the money spent by Toulouse Oliver’s campaign compared to Espinoza’s.

Toulouse Oliver raised more money than Espinoza but has also spent a significant amount. In the email to NM Political Report, Espinoza pointed out that her campaign raised $160,000, about half of what Toulouse Oliver’s campaign has raised so far.