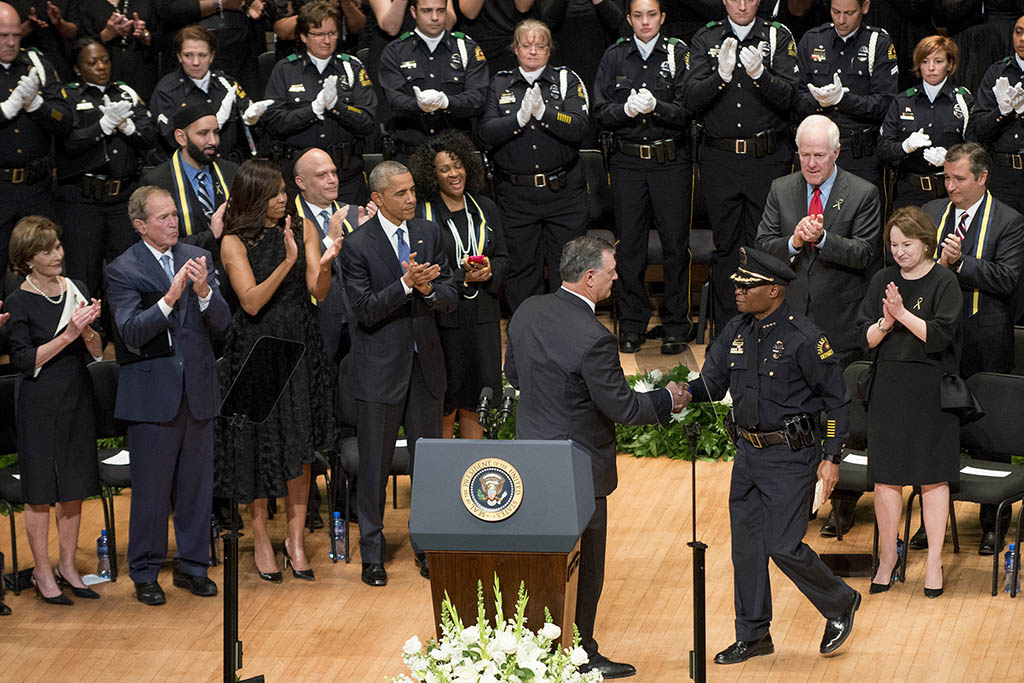 Dallas Mayor Mike Rawlings welcomes Dallas Chief of Police David Brown to the podium as the Bushs and the Obamas look on at the interfaith police memorial at the Morton Meyerson Symphony Center in Dallas on July 12, 2016.

DALLAS — Steps away from pictures of the five officers killed last week by a lone gunman, President Barack Obama, former President George W. Bush and Dallas Mayor Mike Rawlings said Tuesday the best way to honor their lives is for Americans to open their hearts to one another and unite.

Dallas Mayor Mike Rawlings welcomes Dallas Chief of Police David Brown to the podium as the Bushs and the Obamas look on at the interfaith police memorial at the Morton Meyerson Symphony Center in Dallas on July 12, 2016.

“With an open heart, we can worry less about which side has been wronged and worry more about joining sides to do what is right,” Obama said at an interfaith service honoring Brent Thompson, Patrick Zamarripa, Michael Krol, Michael Smith and Lorne Ahrens.

Obama, Bush and local leaders addressed a sea of black suits, dresses and uniforms at the Meyerson Symphony Center, where an estimated 2,500 people attended the service. Throughout the dimly lit room, attendees sported yellow and blue sashes representing the Dallas community and its first responders, respectively. The stage for the memorial was adorned with photos of the five fallen officers, as well as an array of flags representing North Texas cities that were among the first to rally for Dallas on Thursday.

The five officers died when Micah Xavier Johnson, 25, opened fire on police Thursday night, striking 10 Dallas Police Department officers and one from the Dallas Area Rapid Transit Authority. The shooting came at the end of a peaceful protest by hundreds against the two recent police killings of black men Alton Sterling in Louisiana and Philando Castile in Minnesota. The mayor and the president said the city has made efforts to transform the department’s reputation and improve relations with the black community.

“I see what’s possible when we recognize that we are one American family, all deserving of equal treatment, all deserving equal respect.”— Barack Obama, President

In his remarks, Obama called upon Americans to reject those who would try to use the events in Texas, Louisiana and Minnesota to paint police officers or protesters with one broad brush, instead asking people to focus on Americans’ common bonds.

Even those who dislike the phrase “Black Lives Matter” should be able to understand the pain of Sterling’s and Castile’s families, he said. And those who advocate harm to police “do a disservice to the very cause of justice that they claim to promote.”

Obama went on to say that both the recent attack and the national outcry over law enforcement’s treatment of minorities exposes the faults in America’s democracy but that the way to mend those faults is not by retreating to ideological corners or divisive politics. He exhorted Americans to instead follow the example of the Dallas police officers who gave their lives.

“As Americans, we can decide to come together and make our country reflect the good inside us, the hopes and simple dreams we share,” Obama said. “Hope does not arise by putting our fellow men down. It is found by lifting others up. That’s what I take away from the lives of these outstanding men.”

Bush, Obama’s predecessor, also called for unity during his remarks at the memorial and lauded Dallas police officers for their service during the deadly incident.

“They and their families share the unspoken knowledge that each new day can bring new dangers, but none of us were prepared, or could be prepared, for an ambush by hatred and malice,” Bush said. He later added, “To renew our unity, we only need to remember our values. We have never held together by blood or background.”

Earlier in the service, Rawlings credited police with their efforts to combat violence.

“These men and women are here because we have a common disease — the absurd violence on our streets,” he said. “Those who will help us fight it are our men and women in blue. They have died for that cause.”

“To wage this battle against violence and separatism, today must be about unity.”— Mike Rawlings, Dallas Mayor

He added, “Dallas’ pain is a national pain. To wage this battle against violence and separatism, today must be about unity. Unity among faith groups, police and citizens and, and yes, politicians.”

Dallas Police Chief David Brown, who has drawn national attention for his response to the shootings, recited the lyrics to “As” by Stevie Wonder to the families of fallen officers.

“There is no greater love than this — that these five men gave their lives for all of us,” Brown later added.

U.S. Sen. John Cornyn, who also spoke at the service, told The Texas Tribune beforehand that Brown deserved praise for his handling of the shooting.

“If anything good can come out of this terrible tragedy, it will be a long overdue conversation about race and justice and the skepticism some elements of the community have about whether law enforcement is actually on their side,” Cornyn said. “I think there’s no better spokesman than Chief Brown, who’s done an amazing job.”

Hours before the fatal shootings last week, Obama addressed the nation, saying there are racial disparities in police shootings but recognizing that the incidents do not contradict the appreciation communities have for most law enforcement.

State officials reacted via social media and updated followers with each development. Gov. Greg Abbott extended thoughts and prayers and offered state assistance to Dallas. The governor on Monday announced his wife, Cecilia, would attend the memorial while he recovers from an infection after suffering severe burns to his legs and feet Thursday.

Obama and first lady Michelle Obama were scheduled to visit families of the fallen officers after the memorial service.

This article originally appeared in The Texas Tribune at http://www.texastribune.org/2016/07/12/obama-bush-speak-dallas-memorial/.