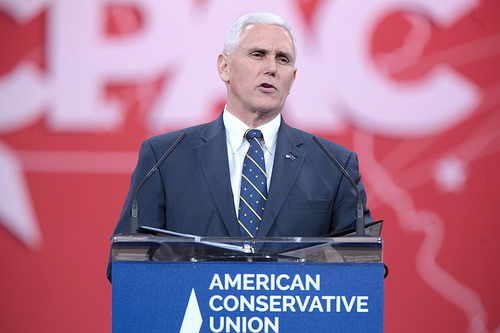 “Thanks to Governor Mike Pence’s strong, conservative leadership, Indiana is in a more prosperous position now than before he was elected, and it’s a direct result of his commitment to pro-growth policies and successful governance,” Gov. Susana Martinez said in a statement for the Republican Governors Association, which she chairs. “The RGA congratulates Governor Pence on his selection as the Republican Vice Presidential Nominee and we look forward to the nation benefiting from his dynamic leadership.”

She previously clashed with the New York business magnate over his immigration policies, which include building a wall between the U.S. and Mexico and deporting all 11 million undocumented immigrants from the country.

When Trump visited Albuquerque in May, he criticized Martinez at his rally for presiding over a state with a large number of food stamp recipients.

Unlike four years ago, Martinez is not slated to speak at the Republican National Convention set to take place next week in Cleveland. Trump told the New York Times last month that he would not invite any politician who hasn’t endorsed him to speak.

“Governor Pence is a choice that will motivate Republicans,” Maestas said in a statement. “Following a long record of fighting for conservative values in Congress, Pence has established himself as a strong and effective governor in Indiana. His experience in both legislative and executive roles, along with his conservative convictions make him an excellent pick to compliment Donald Trump and help him implement his plan to make America great again.”

“I served with Gov.Pence in the House when he represented Indiana’s Second Congressional District,” Pearce said in a statement. “He is a solid conservative, a strong person of faith, and is deeply devoted to his family.  He has worked tirelessly for the people of Indiana as Governor and I have no doubt he would bring the same work ethic to the vice presidency.”

“Mike Pence has a record of lowering wages, limiting the rights of our LGBT community, and supporting laws that give the upper hand to corporations,” Haaland said in a statement. “Trump’s choice for Vice President means that he is not changing his tune and will continue his campaign to divide Americans with discriminatory politics and failed economic policies that favor the wealthy few over New Mexico families.”

Haaland also took time to bring Trump back into picture, calling his campaign “reackless, dangerous and divisive” and Pence “just as extreme as [Trump] is.”

Pence, a Tea Party favorite, has been governor of Indiana since 2013. His pick for vice president means he’ll have to forgo his reelection campaign for a second term as governor this fall.

Before that, Pence was an Indiana congressman for 12 years.