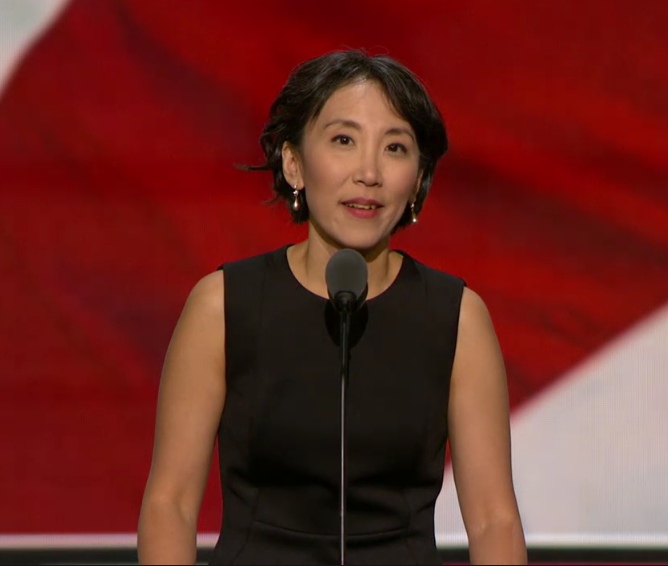 A doctor from Los Alamos spoke at the Republican National Convention Thursday, the same day that Donald Trump formally accepted the party’s nomination and gave a lengthy speech.

Screenshot from video of Dr. Lisa Shin at the 2016 Republican National Convention

Dr. Lisa Shin, an optometrist, spoke about her support for Trump—and her opposition to presumptive Democratic nominee Hillary Clinton.

“Hillary Clinton is a direct threat to the American Dream,” Shin said in a short speech. “Her proposals would be utterly devastating to our economy. Her dangerous ideology undermines our democracy and freedom.”

Shin’s full speech is available below.

Shin also received media attention for her role as the head of Korean Americans for Trump. NBC news interviewed Shin before her speech.

There have been few polls showing thoughts of Asian-Americans on Trump, but NBC News cited a May poll that showed 80 percent of Korean-Americans have a negative view of Trump.

Shin was the only New Mexican to speak at the convention. Gov. Susana Martinez, also a delegate, did not speak and has continued to not endorse her party’s standard bearer. A spokesman told the Albuquerque Journal that she needs to hear more about how he will protect the national labs in New Mexico among other things.

Other New Mexico Republicans, like Shin, are fully on board with Trump.

The Republican Party of New Mexico complimented Shin on her speech.

“We are so proud that Dr. Shin had the opportunity to address the convention floor and share her story and support for our nominee,” Republican Party of New Mexico chairman Debbie Maestas said in a statement Friday. “Her energy reflects well upon our entire delegation and her enthusiasm speaks to how New Mexicans of all backgrounds support Donald Trump.”