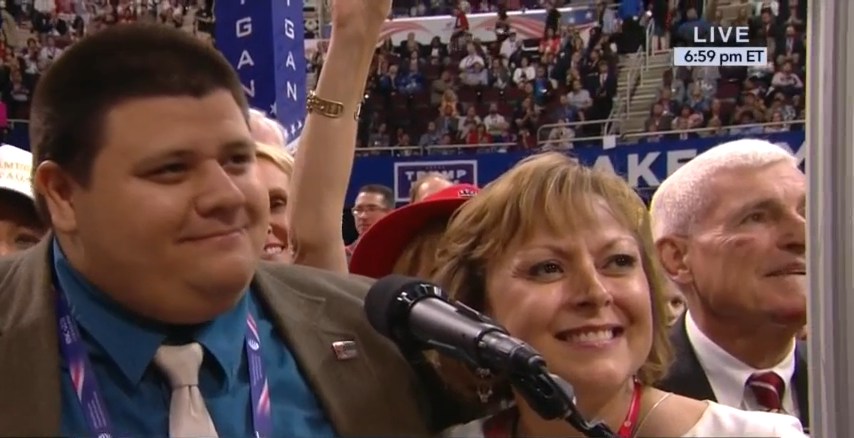 Screenshot of CSPAN coverage of RNC.

If you watched the roll call at each the recent Democratic and Republican National Conventions waiting for New Mexico to come up, you probably noticed each state bragging about certain attributes of their state before they announced the vote totals.

Screenshot of CSPAN coverage of RNC.

For example, Idaho’s Republicans bragged about the “world-famous potatoes” that are grown there. Both Democratic and Republican delegations in Minnesota mentioned Prince.

New Mexico’s delegation was not immune to the braggadocio that comes with wearing silly hats and waving signs promoting your party’s preferred candidate at these conventions.

At the Republican National Convention in Cleveland last week, Gov. Susana Martinez took the mic to talk about New Mexico.

“I am Governor Susana Martinez,” she said. “I am proud to represent a beautiful, exciting and a culture that is so diverse. An amazing state. The Land of Enchantment and the great state of New Mexico.”

Sam LeDoux, who Martinez turned the microphone to, said he was “proud to stand next to the nation’s first female Hispanic governor.”

Slate ranked the states on their convention bragging at the RNC and New Mexico came in 26th (out of 56, since territories and Washington D.C. were included). Slate did not do such a ranking for the DNC.

The Democrats spoke a little bit longer at their convention in Philadelphia this week.

He continued, “We are so proud of our brave and courageous veterans, including the Navajo Code Talkers.”

Screenshot of New Mexico delegation at the Democratic National Convention.

He then handed off to, as he noted, the first Native American state party chair, Deb Haaland.

Like Martinez, Haaland noted New Mexico is known as “The Land of Enchantment.”

She mentioned the “23 Indian tribes, including 19 pueblos, three Apache tribes and the great Navajo Nation.”

“New Mexico is home to the once mighty Rio Grande wherein homage to our ancient agricultural history which was begun by the Pueblo Indians, our state question is red or green—chile, that is,” she said. “In a testament to the fierceness of our Democratic state legislators, our state remains union strong,an IATSE film workers union and ‘Breaking Bad’ the show!”

“The great state of New Mexico, home of Breaking Bad, and Better Call Saul, though it doesn’t seem to be catching on to the same degree!”

The Washington Post, for one, wasn’t too impressed with the mention of Breaking Bad.

The paper suggested another brag for New Mexico: “Home of the Alien Light Parade, the marquee event of the Roswell UFO Festival!”

Vox took a look at the trends on the bragging.

Republicans and Democrats brag about fundamentally different things. Twenty-five of 50 Democrats enumerated on the civil rights achievements in their states, compared with two Republicans.

Republicans, on the other hand, were nearly three times as likely as Democrats to boast about job creation — and twice as likely to brag about their sports teams’ performance.

Slate also dug into the numbers.

Republicans touted conservative values, pride in law-enforcement officials, and lower taxes. Democrats, meanwhile, praised their states’ diversity, history of civil rights, and Native American tribes. Republicans brought up jobs and businesses twice as much as Democrats did while Democrats showed more love for military vets and women. Democrats also boasted of being Democrats slightly more than Republicans feted their own partisan credentials, with 21 different delegations in Philadelphia bragging about the blueness of their state houses, governors’ mansions, or members of Congress compared with 20 of their Cleveland counterparts. Republicans seemed to express more vocal pride in their eventual nominee, with positive mentions of Donald Trump narrowly edging out shoutouts to Hillary Clinton, possibly reflecting lingering divisions within the Democratic party after a bitter primary. Barack Obama, by contrast, tied Trump with seven name-checks each.

Party officials and others now have four years to come up with what they want to say at the next conventions in 2020.