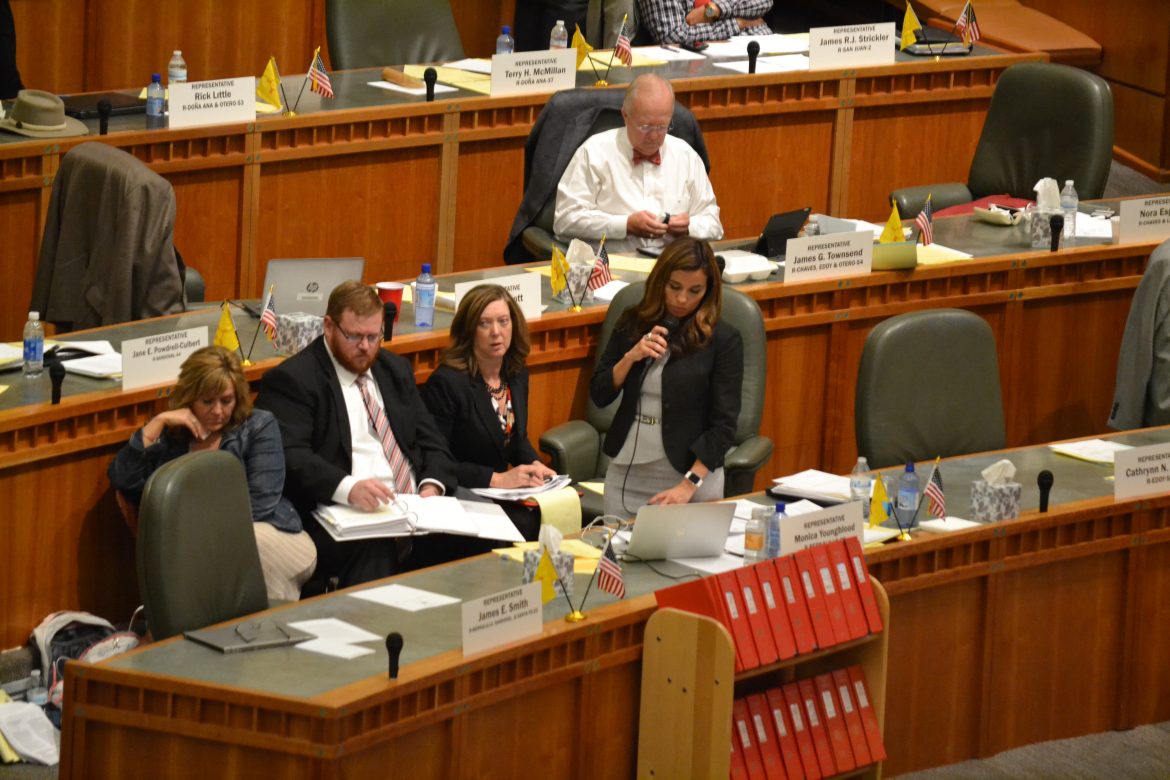 Rep. Monica Youngblood, R-Albuquerque, debating her bill to bring back the death penalty.

After a three hour debate before the sun rose on Thursday morning, the House voted to bring the death penalty back to New Mexico on a narrow vote.

The 36-30 party-line vote came after emotional testimony and debate, largely from Democrats.

The proposal now heads to the Senate, though it appears very unlikely that the chamber will take up the effort before the end of the special session.

Rep. Monica Youngblood, R-Albuquerque, introduced her bill by listing the five police officers who were killed while on duty in the last 18 months, then listing some of the children who were murdered in recent months.

The debate came after two hours of debate on an appeal by Democrats that the public was not given enough time ahead of time to be told the House would consider the bill.

Chasey said the focus in the House during the special session was wrong. Instead of focusing on executing murderers, Chasey said the Legislature should focus on prevention of abuse and killing of children.

“My first reaction, and that of all of my constituents who have contacted me is ‘how do we prevent this from happening again?’” Chasey said when speaking about the aftermath of the recent death of Victoria Martens. “That’s all they want to know.”

Youngblood, meanwhile, said her constituents called her to demand she address the lack of a death penalty.

Of the 211 attempts at instituting the death penalty in the 40 years it was legal between 1979 and 2009, only 16 death sentences were handed out and only one execution took place—the 2001 execution of Terry Clark. Clark was sentenced to death twice, for two different crimes.

“We would never executive an innocent person,” Youngblood said.

“I think the risk of a wrongful execution, perhaps it is not huge, it but it is real and it needs to be addressed,” Egolf said later in his debate.

“This is like a Billy the Kid death penalty bill,” Maestas said.

Rep. Javier Martinez, D-Albuquerque, asked Youngblood how long she worked with drafters to write the legislation.

Youngblood said she collaborated with bill drafters “for a little over a week” but noted they based the law on the law that existed before the 2009 repeal.

“That was the law just seven years ago and deemed constitutional by the New Mexico Supreme Court after thirty years,” Youngblood said.

Youngblood defended the potential cost. She said that Andrew Romero, the man recently convicted of killing Rio Rancho Police Officer Gregg Benner, would spend the rest of his life in jail. If the 29 year old lived to the average life expectancy for a man, it would cost the state $2.4 million. She said the 11 years it takes, on average, for the appeals process to play out on a death penalty case would cost the state only $550,000.

One of Youngblood’s expert witnesses said that it would not increase any costs in district attorneys offices.