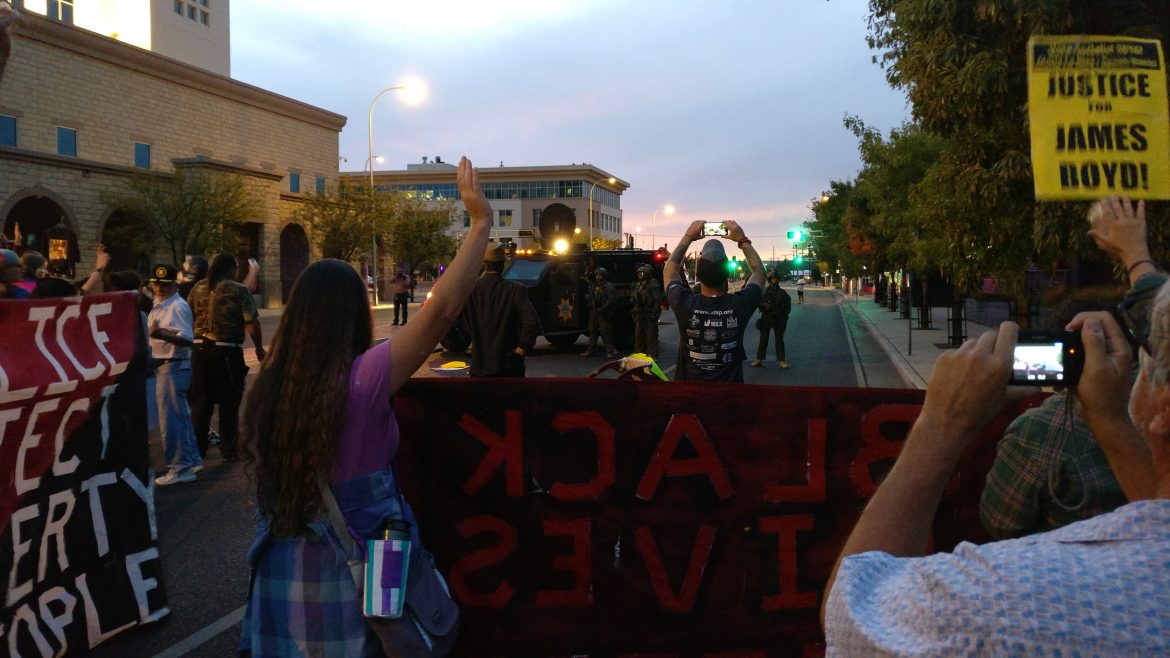 Protesters confronting police in downtown Albuquerque a day after a deadlocked jury in the case against two former Albuquerque Police Department officers.

Protesters, disappointed with a mistrial in the case of two Albuquerque police officers, blocked traffic, chanted and had a few tense moments with police Wednesday night in downtown Albuquerque.

The protesters, under 100 at the peak and almost a quarter that by the end of the protest hours later, began at the 2nd Judicial District courthouse, before marching to the police station.

After returning to the courthouse, protesters briefly clashed with police wearing tactical gear. Reporters saw pushing and shoving between the two groups. Police eventually got protesters to retreat to the sidewalk next to the courthouse without any arrests.

The protests came after a jury was unable to come up with a verdict in the murder trial of James Boyd, a homeless camper who was shot and killed by Albuquerque police. Keith Sandy and Dominique Perez faced trial for murder, marking the first time in the city’s history officers faced trial for a killing while on the job.

While protesters marched down Central, police on motorcycles and cars stayed a block away, leading to no interaction took place between the two.

Protesters chanted “Justice for James Boyd” and “Jail Killer Cops” while marching and facing off with police.

Some were part of the UnOccupy Albuquerque movement and some wore masks to cover their faces.

With the mistrial, prosecutors can choose to retry the case. Randi McGinn, the special prosecutor who took the case after a judge removed the Bernalillo County District Attorney Kari Brandenburg from the case, told media outlets that she will not retry the case.

Instead, McGinn said the next district attorney will make that decision. Brandenburg’s term ends next January, and Raul Torrez is the only candidate on the ballot this November to succeed her.

“This is an extremely important case for our community and we must not rush a decision about how best to proceed,” Torrez said in a statement after the announcement of a hung jury. “Any decisions on the path forward must be guided by the law and the facts, and that’s exactly what I intend to do with every case when I am District Attorney.”