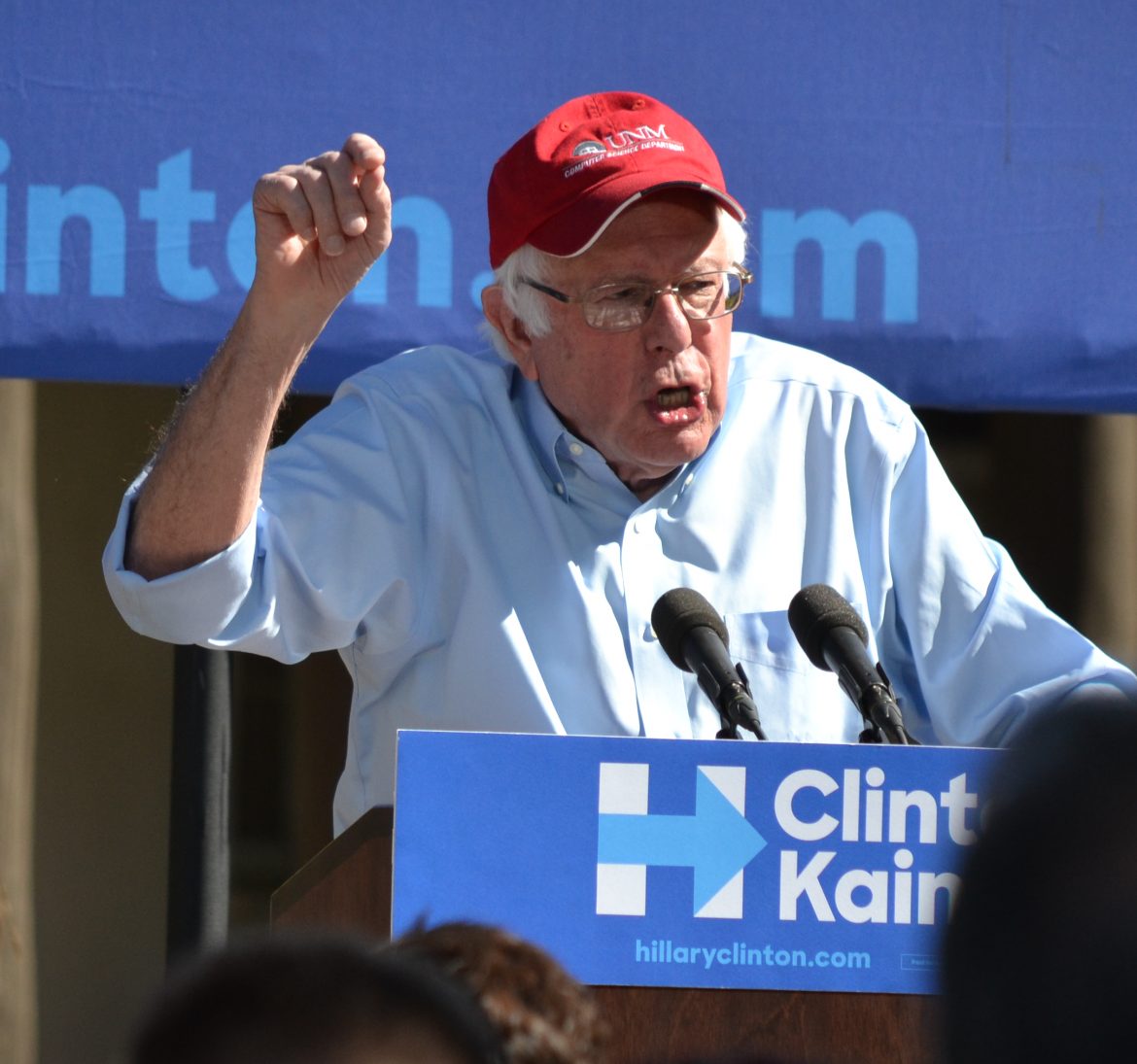 Bernie Sanders at a Hillary Clinton rally in Albuquerque

Between campaign rallies in Colorado and Arizona for Hillary Clinton, Bernie Sanders stopped in Albuquerque to spoke at a short rally for the Democratic nominee for president.

Coming off his loss to Clinton in a contested race for the Democratic presidential nomination, Sanders focused his speech on policies on which both he and the former U.S. Secretary of State agree.

The independent U.S. Senator from Vermont also spent much of his 30 minutes criticizing Republican nominee Donald Trump, whom he called “racist,” “xenophobic” and “sexist.”

“We cannot support a candidate who is running a campaign based on racism, based on sexism, based on dividing us up,” Sanders told a crowd of roughly 1,000 people gathered Tuesday in the middle of the University of New Mexico campus. “That is not acceptable.”

Sanders listed off Clinton’s stances on issues like campaign finance reform, climate change, raising taxes on the wealthy and immigration.

For example, Sanders said he and Clinton both support doubling federal funding for community health centers and forgiving student debt on doctors and health care workers who commit to practicing in underserved areas after graduation.

On climate change, Sanders said that scientists “from all over the world” say “in a unanimous voice that climate change is real, it is a threat to our country and it is already doing devastation to the world.”

Noting Clinton’s acceptance of scientific consensus, Sanders urged the crowd to vote for her “if for no other reason than the future of this planet, which is a pretty big reason.”

On one of his trademark issues, money in politics, Sanders argued the importance of the next president’s pick to nominate a vacant U.S. Supreme Court position.

“She will not nominate a candidate who is not prepared to say he or she will vote to overturn Citizens United,” he said.

Sanders also stressed that his supporters keep fighting beyond the election for the issues raised by his presidential campaign.

“Politics does not end on Election Day,” he said. “We’ve got to elect Hillary Clinton on Nov. 8. On Nov. 9, we’ve got to work to transform this country.”

Sanders’ pronouncements didn’t stop a slew of disgruntled supporters of Sanders’ presidential run against Clinton from often shouting anti-Clinton slogans in the back of the crowd throughout his and other people’s speeches.

Some shouted “sell out,” “never Hillary” and “lock her up” while holding signs in support of third party presidential candidates like Gary Johnson and Jill Stein.

Those protesting in the back of the crowd also shouted at other rally speakers, particularly state Democratic Party Chair Debra Haaland. One even carried a large sign that read, “Debra Haaland Cheated,” a reference to the cancellation a nonbinding straw poll at the Democratic Party preprimary convention earlier this year.

Hendry noted that he is a registered independent (“I’m a decline-to state because I’m a socialist, I’m not afraid to say that,” he told the crowd) and supported Green Party candidate Ralph Nader in 2000.

“We got everything we deserved in the socialist movement by not turning out for Al Gore,” Hendry said to cheers and scattered boos.