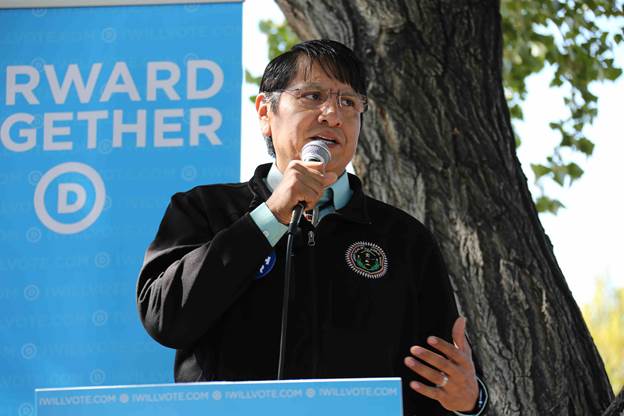 The Democratic National Committee announced the support of Navajo Nation president, Russell Begaye, and Vice President, Jonathan Nez, on Friday. The endorsements came as part of the DNC’s bus tour, which traveled to Albuquerque earlier that same day.

Begaye praised Clinton’s work with Native Americans both during the campaign and during her time as U.S. Senator from New York.

“In this campaign, she has committed to serving tribal nations through strengthening public safety, combating drugs and alcohol, advocating for access to high quality education, improving Indian health care, and fighting for our Native American veterans,” Begaye said. “As a Senator, she continued this effort by cosponsoring legislation to improve Indian health care and tribal colleges. I trust she will respect our treaty and I look forward to working with her administration on a government-to-government basis.”

Nez said he is “in full support of Hillary Clinton.”

The bus tour went to Shiprock and Tuba City.

In addition to covering a large amount of Northwestern New Mexico, the Navajo Nation also covers a large area of Northeastern Arizona and a small part of Utah.

Both states are considered in play this year because of the unpopularity of Donald Trump among many groups. One such group is Mormons, who make up more than two-thirds of the state. In Arizona, Mormons make up 6.14 percent of the state’s population, the fifth-highest in the nation.