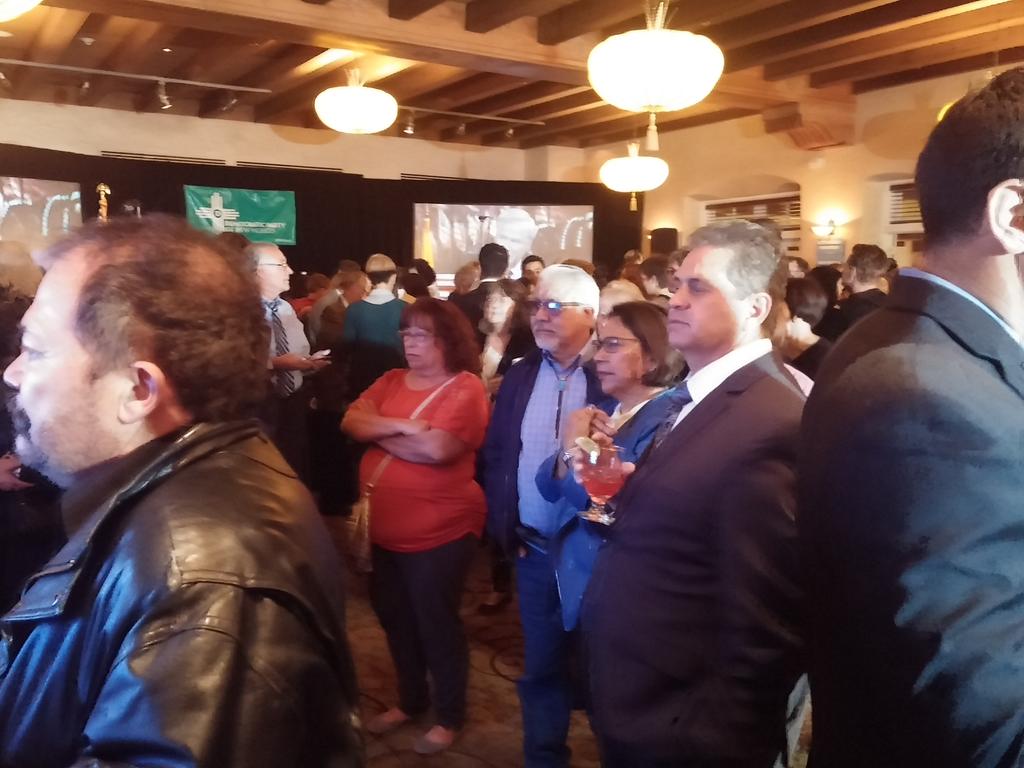 Some Democrats in Albuquerque start to brace for a Donald Trump victory as the watch party dwindles.

A night that ended with one of the most stunning upsets in modern presidential history began, in Albuquerque and likely in many other cities throughout the country, with Democrats feeling optimistic about the country on the cusp of electing its first female president.

At the Hotel Andaluz in downtown Albuquerque, an enthusiastic crowd of state Democrats gathered to watch the election results and, they thought, to welcome Hillary Clinton to the White House.

Congresswoman Michelle Lujan Grisham, a Democrat who easily won reelection to represent the Albuquerque area, showed up wearing a white pantsuit. She also wore a button bearing Clinton’s face on her chest.

She called her outfit “my white suffrage Hillary Clinton pantsuit.”

“Look at how exciting the general election is in New Mexico right now!” Lujan Grisham told NM Political Report at the time.

She was referring to the large number of women running for office listed down the ballot in New Mexico. Lujan Grisham went on to say how women in elected positions tend to pass more bills and get things done when they’re in office.

As she said this, news reports showed election results slowly going toward Republican Donald Trump in key states that Clinton needed to win. States like North Carolina, Florida and Ohio. Even Pennsylvania.

But the confident Democrats gathered at Hotel Andaluz didn’t seem to be paying close attention to the national results. Instead, the results coming in from state legislative elections seemed to give them some hope that things would turn out alright. That, and plenty of alcoholic drinks.

One Democrat I talked to, high on alcohol, didn’t want to acknowledge the impending doom surrounding his party on the national level.

“The Republican watch party is over there,” he told me after I pointed out the election results trickling in.

He pointed to direction of the Albuquerque Convention Center two blocks away, where state Republicans were holding their own get together to watch election results.

Later in the night, Clinton won New Mexico by a wide margin, but her shot at the presidency was still looking pretty grim on the national level.

New Mexico Democratic Party Chairwoman Debra Haaland addressed the crowd at Hotel Andaluz. She ignored the dire scenario of Clinton’s overall chances and instead focused on her strong showing locally.

“We won really big for Hillary in New Mexico,” Haaland said to cheers. “We won huge and I couldn’t ask for more.”

As the numbers got worse for Clinton, people started leaving the watch party. Others cringed with nervousness as they watched the election returns.

But at the Republican watch party just two blocks away, classic rock from groups like AC/DC blared over speakers.

And despite being on the cusp of losing control of the state House of Representatives, won just two years previous after years of frustration, a Republican spokesman revelled in the favorable national numbers and the defeat of longtime New Mexico Senate Majority Leader Michael Sanchez.

I entered what also looked to be a party dying down.

But the party livened up when state Senator-elect Greg Baca and Supreme Court Justice Judith Nakamura arrived to give victory speeches.

As both elected candidates came to give victory speeches to a crowd of supporters, Allen Weh, chairman of the Trump campaign in New Mexico and a former candidate for U.S. Senate and governor, came into the party with an entourage.

Election results continued to trickle in on TV screens throughout the room.

Every once in awhile, the crowd would chant, “Trump! Trump! Trump!” in anticipation of the first reality television star and first World Wrestling Entertainment Hall of Famer to ever hold the highest political office in the most powerful country in the world.

Nakamura thanked voters of all partisan stripes who put her into office.

She also touched on something that Lujan Grisham and Democrats across the country hoped for earlier in the night—more women getting elected to public office.

“Tonight, with this vote, [you elected] the elected first female majority majority in the New Mexico Supreme Court,” Nakamura said to the cheers of those gathered at the Republican watch party.